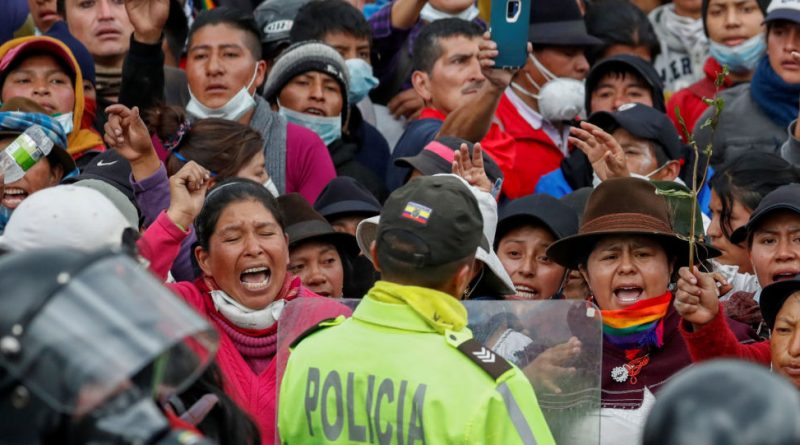 EDITORIAL NOTE: CONAIE is one of the main political and grassroots forces behind recent protests in Ecuador; it is also the case that the organization has been funded by NED as has Pachakutik (another NGO). Additionally CONAIE was for several year at odds with Rafael Correa’s government, arguing environmentalist concerns.

The indigenous movement plays a decisive role in the mobilizations in Ecuador. Its main organization is the CONAIE that leads the protests and is one of the determining players in what may happen. But what is CONAIE? Sputnik spoke with one of its leaders.

The indigenous movement has its main expression in CONAIE, which integrates indigenous nations from the three regions of the country: the Andean, coastal and Amazon. “We have argued that we are 45% of the Ecuadorian population, and of that totality CONAIE represents 70% of the communities,” he explains.

RELATED CONTENT: Ecuador’s Minister of Defense: We are Ready to Use Lethal Force

CONAIE has become, Ulcuango explains, “a political actor without being a political party.” It has been since the 1990s, since when it has become central in Ecuadorian dynamics, both in its ability to mobilize to dismiss presidents, as in 1997, 2000 and 2005, as well as to set up protest and political agendas.

“They have been able to introduce the principles that the indigenous movement had been proposing through the political project of the plurinational State – approved in the Constitution of 2008 – and it has also been constantly confronting the Ecuadorian right and the neo-liberal economic model.”

It was therefore predictable that CONAIE would think that it would play a central role in the confrontation against a neoliberal model such as the one that Lenin Moreno’s government has been promoting since he assumed the presidency in 2017. The current mobilization situation is the proof of that: the current fight to repeal the economic decrees approved by the president has CONAIE at the forefront of the action.

The straw that broke the camel’s back
The indigenous leader, who was also an ambassador to Bolivia during Rafael Correa’s government, points to the adjustment decreed by Moreno last week as the breaking point:

“What tips the glass between CONAIE and the government is when it eliminates in its entirety all the fuel subsidy, which is the only thing that it maintained in favor of the people, with that economic measure affecting the entire poor population of the country, so therefore, the indigenous movement has reacted against this policy, the model, the system.”

CONAIE’s relationship with Moreno, who had been vice president under Rafael Correa, then found its breaking point in that announcement. Previously Ulcuango Farinango explains that the government had established some dialogues that were used “to continue delayinv, to give some space, making very stringent claims while increasing economic measures against the people.”

The break with the government unified the movement and allowed it to regain a mobilization capacity that Moreno had underestimated. CONAIE began with actions in different parts of the country, such as roadblocks, until it came together in a mobilization that arrived in Quito on October 9, challenging the state of emergency and the subsequent curfew.

Repression and delegitimization
“The government has tried to discredit the main leaders, second it has tried to divide the indigenous movement, third they are trying to lead the struggle to fatigue,” he analyzes. That tactic has so far had no result and CONAIE has remained united, holding the same point: they will only talk with Moreno if he reverses with the reforms applied.

These days have oscillated in speeches from the government: it has repressed with great force, “there are more than 1000 detainees, more than 500 people injured, and 7 dead”; it has called for dialogue without accepting discussion of the economic reforms, and has opted for wear and for “trying to fragment and polarize between white / mestizo society and indigenous people,” he analyzes.

However, the working people of Quito “have supported the indigenous march, have received it from both the south and the north,” because it responds to legitimacy, and to a common cause, he says.

“They know that the indigenous movement not only fights for their demands, which are legitimate and for which we must continue fighting, at this moment the fight is against the “paquetazo”, therefore, the poor people of the city, the students, the workers, women’s organizations, support, receive and see with expectation and hope the actions of the indigenous movement. ”

After more than nine days of protests, blockades and mobilizations, CONAIE is one of the main actors that can determine the course of the crisis. At the moment there is no agreement, and the indigenous leader doubts that the government will weaken them: “the repression generates an increasingly strong reaction from the communities, from society”.