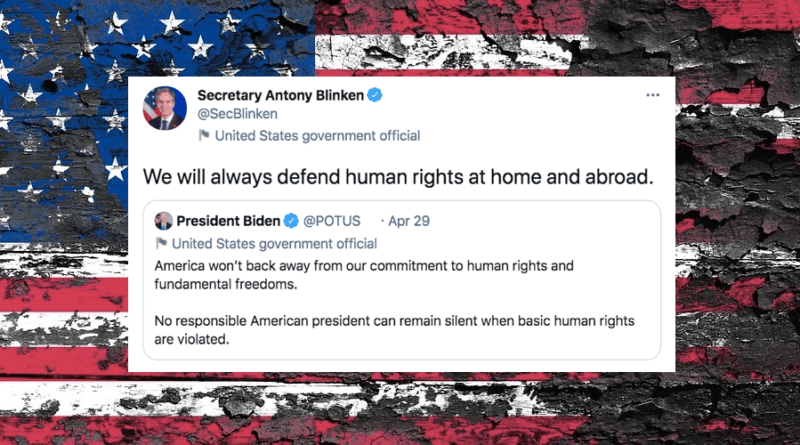 “America won’t back away from our commitment to human rights and fundamental freedoms,” reads a Wednesday tweet from the presidential Twitter account. “No responsible American president can remain silent when basic human rights are violated.”

The tweet, an excerpt from the US president’s prepared congressional address, was retweeted on Saturday by Secretary of State Tony Blinken with the caption, “We will always defend human rights at home and abroad.”

Like all US secretaries of state, Blinken’s public statements overwhelmingly focus on the claim that other nations abuse human rights, and that it is America’s duty to defend those rights. Which is very silly, considering the fact that the US government is the single worst human rights abuser on planet Earth.

And it’s not even close.

We will always defend human rights at home and abroad. https://t.co/wmPTO7Aa0k

And it just says so much about who is controlling the dominant narratives in our society that these actions are not considered human rights violations. Clearly we should all have a human right to not be murdered by explosives dropped from the sky, and we in nations where this does not commonly occur would be very upset if it suddenly began happening to us. Clearly it is an abuse of human rights to deliberately starve children to death because you don’t approve of the people who run things in their part of the world. Clearly it is an abuse of human rights to turn a nation to rubble and chaos for profit and geostrategic control.

Not a day goes by when the US government is not doing these things, both directly and through its imperial member states. Yet the US secretary of state spends all day tweeting that other governments are guilty of human rights violations. Because, as far as power is concerned, narrative control is everything.

A few years back we used to hear a lot about Duterte's atrocious human rights record—but that seems to have stopped over the past year or so. Wonder what Duterte could've possibly done to get the human rights industry heat off him?https://t.co/vWHLqox1N9 pic.twitter.com/rkd09xuUrx

As journalist Mark Ames recently flagged, a few years ago the imperial narrative managers were very keen on informing us that Philippine president Rodrigo Duterte was a despotic human rights abuser, but we haven’t been hearing much about what an evil brute he is of late.

So what happened? Did Duterte cease promoting the extrajudicial killings of drug users and spontaneously transform into a cuddly wuddly human rights advocate?

What happened, as Ames points out, is that Duterte ceased publicly toying with the notion of pivoting from Washington to Beijing as he had been doing since taking office, shifting to a hard line against China in support of Manila’s longtime imperial overlord.

We saw the change in coverage because Washington and its imperial spinmeisters only care about human rights abuses insofar as they can be exploited against the few remaining nations like China that have insisted on their own sovereignty instead of allowing themselves to be converted into member states of the US-centralized empire. We know this not only from naked eye observations of the empire’s behavior from year to year, but also because they have blatantly said so.

"The reality is that actions against China were already planned, and a narrative was used to justify them."https://t.co/J9RHRcPat1

As I never tire of reminding readers, a leaked 2017 State Department memo spelled out in plain English how the US only cares about human rights when they can be weaponized against its enemies, and has a standing policy of ignoring them when they are committed by its allies/vassal states.

In December 2017 Politico published an internal memo that had been sent the previous May to then-Secretary of State Rex Tillerson by virulent neocon Brian Hook. The memo provided useful insight into what it looks like when a toxic swamp monster orients a political neophyte to the inner mechanics of the empire, explaining the way “human rights” are really just a tool to be cynically leveraged to advance the goal of planetary hegemony. It reads like an old veteran explaining the backstory to the new guy in the pilot episode of a new TV series.

“In the case of US allies such as Egypt, Saudi Arabia, and the Philippines, the Administration is fully justified in emphasizing good relations for a variety of important reasons, including counter-terrorism, and in honestly facing up to the difficult tradeoffs with regard to human rights,” Hook explained in the memo.

“One useful guideline for a realistic and successful foreign policy is that allies should be treated differently — and better — than adversaries,” Hook wrote. “We do not look to bolster America’s adversaries overseas; we look to pressure, compete with, and outmaneuver them. For this reason, we should consider human rights as an important issue in regard to US relations with China, Russia, North Korea, and Iran. And this is not only because of moral concern for practices inside those countries. It is also because pressing those regimes on human rights is one way to impose costs, apply counter-pressure, and regain the initiative from them strategically.”

In Imperialist Brain Worms World, “human rights” is nothing other than a propaganda weapon to be used for building antagonistic international coalitions, manufacturing consent for invasions and regime change ops, and spinning the dominant narrative in support of starvation sanctions and world-threatening cold war escalations. It’s just mass-scale concern trolling of the most destructive and malignant sort imaginable.

This is what you are feeding into, by the way, when you parrot State Department lines about how horrible and tyrannical US-targeted governments are. You are helping to circulate the narratives our rulers are spending billions of dollars circulating, and you are doing it for free. You are making the jobs of the imperialists that much easier, because you are unwittingly operating as a pro bono Pentagon propagandist.

Don’t be a Pentagon propagandist, pro bono or otherwise. Don’t be an imperial concern troll. Don’t let the worst human rights abuser on the face of our planet get away with pretending to support human rights.