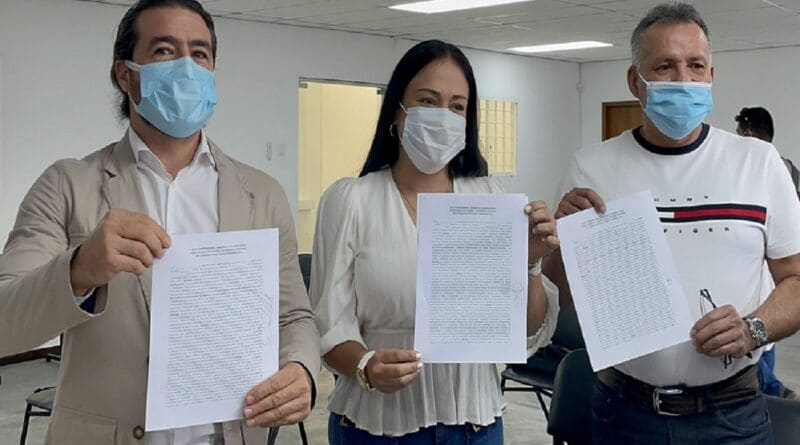 The current governor of the Venezuelan state of Táchira, Laidy Gómez; former mayor of San Cristóbal, Daniel Ceballos; and the former mayor of the capital of Táchira, William Méndez, have signed an agreement to hold primary elections in the state in order to select a single joint candidate who will run in the November 21 regional and municipal elections.

A week ago, Governor Gomez had asked the National Electoral Council (CNE) for support to hold primary elections among the opposition candidates of the coalition of which her party, Democratic Action (AD), is a member.

Governor Gómez declared that “the town of Táchira writes its destiny. We have accepted the commitment to build unity for the people of Táchira. We are going to run primaries.”

Governor Gómez met the CNE president, Pedro Calzadilla, whom she asked for technical and operational support for the primaries as well as the allocation of polling stations to ensure that the largest number of Táchira residents can participate.

Gómez also requested that the primaries be held between September 5 and 22, since the deadline for changes of candidates’ name on ballots expires in late September.

The primary election agreement signed by the AD leaders, titled “The Act of Commitment by the Governorship Candidate with the People of Táchira and their Sovereign Decision in the 2021 Primary Elections” has already been signed by Gómez, Ceballos and Méndez; however, it is expected that pre-candidates Freddy Sandoval, from the Puente party, and Belkys Urbina from Movimiento Venezuela Gente Exelente will also sign the agreement.

A guarantor commission has been assigned for carrying out the Táchira primaries. The commission is made up of various groups from Táchira, including the Catholic Church, university directors and the media.

“Today we have witnessed the signing of the personal commitment document for the governorship candidates,” expressed former rector José Vicente Sánchez. “Subsequently, there will be a document signed by the political parties that will ensure a respect for the primary results. The names of possible candidates of the state have already been sent to the National Electoral Council (CNE), and we have already made progress in the formation of an electoral commission in which each candidate will appoint their respective representatives.”

In the agreement, the three contending candidates have committed to participate in the primaries and to respect the election results.