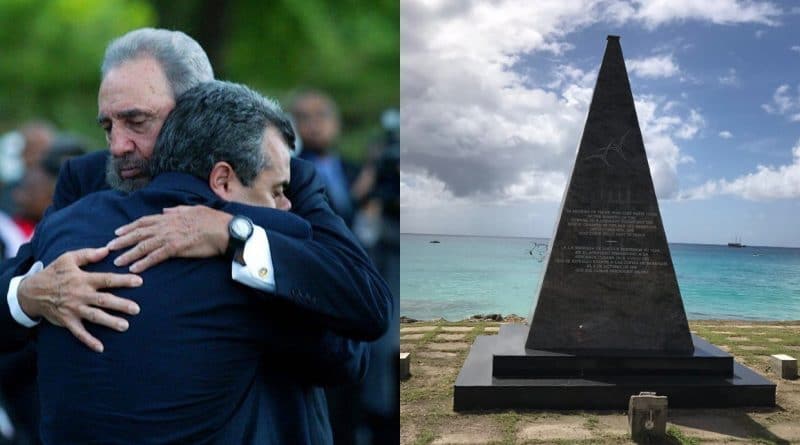 73 people were killed in the bombing attack on the flight which departed from Guyana, with destination to Havana, via the islands of Trinidad and Tobago, Barbados and Jamaica.

Various aviation agencies and the Cuban government determined that the airliner was blown up in midair with the detonation of two explosives which had been placed on the airplane, killing all passengers and crew members of the aircraft which plummeted into the sea off the coast of Paynes Bay, Barbados.

The innocent victims included 11 citizens of Guyana, 5 of the Democratic People’s Republic of Korea and the entire Cuban Olympic fencing team were among 57 Cubans who were murdered on October 6, 1976.

The government and people of Cuba continue to demand justice for the victims of this horrendous crime, and continues to speak out against international terrorism. In defending its independence and sovereignty, Cuba has been victim to terrorist attacks which have taken the lives of 3,478 people and injured 2,099 people.

For years, the U.S. protected CIA operative Luis Posada Carriles, Orlando Bosch, and other the exiled terrorists who dodged extradition, while living comfortably in Florida. Posada Carriles died in a Florida hospital in 2018 at the age of 90 having been afforded total immunity for this and numerous other terrorist bombings and attacks against the Cuban Revolution and innocent people.

While the United States places its enemies on a list of State Sponsors of Terrorism, it’s Washington that has been linked to acts of terror across the world.

The Cuban Barbadian Friendship Association has organized a Regional Solidarity Online Rally to be held on the evening of the anniversary. Messages of solidarity will be shared by trade unionists, peace activists, and friends of Cuba in the Caribbean and North America. Participating organizations will include: Trinidad and Tobago Friends of Cuba, World Peace Council, ANAP (Cuba), Israel Lovell Foundation, USA Peace Council, Caribbean Movement for Peace and Integration, ICAP (Cuba), and For Victory of the People (Guyana), among others.

As Fidel said, there is no worse punishment for the terrorists than “the Revolution itself, its efforts, its successes, its victorious march.”