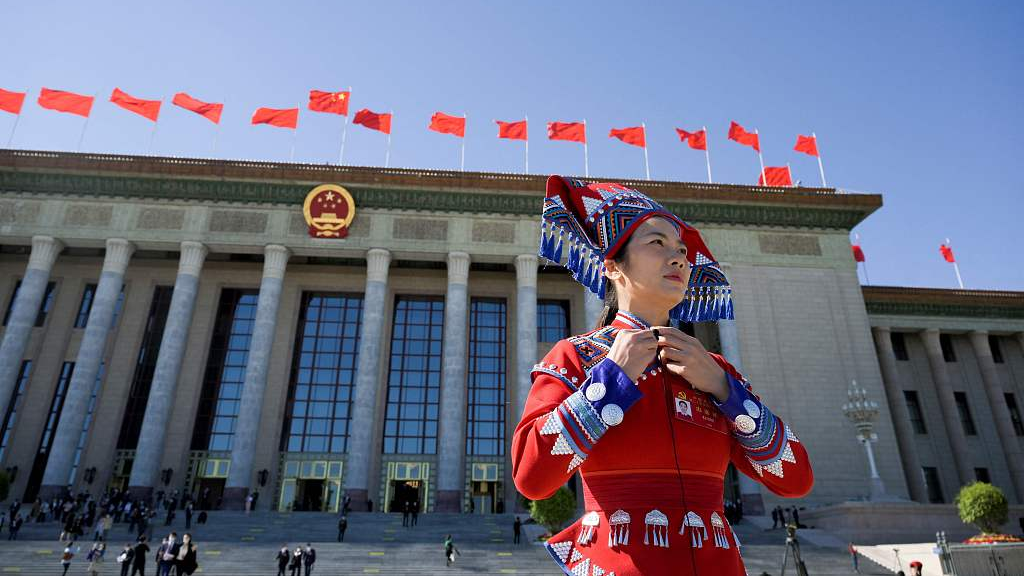 A delegate outside the Great Hall of the People in Beijing, China, where the 20th CPC National Congress was held. Photo: CFP.

The general secretary of the Communist Party of China (CPC) Central Committee, Xi Jinping submitted a report summarizing the major achievements of China in the past decade and its vision for the future at the 20th National Congress of the CPC in Beijing. Among the main points outlined in the report, Xi Jinping buttressed the inevitability of upholding global peace and development and invited all countries to take part in efforts to build a community with a shared future for mankind.

Xi’s report to the 20th CPC National Congress reflected the two roads proposed and built by China. The first is the national road, “the path of socialism with Chinese characteristics,” through which China has built an economy that currently accounts for 18.5% of the world’s GDP in 2021, ranking it as the second largest economy in the world. On this basis, China is likely to become the world’s largest economy during the third decade of the 21st century, which constitutes the country’s objective to “basically achieve socialist modernization by 2035.”

The economic construction of this road has also permitted China to free more than 770 million rural people from poverty, according to the UN definition, providing employment to around 746.5 million people, significantly increasing the disposable income of its residents, guaranteeing health insurance to more than 1.364 billion people, and establishing the world’s largest social security system. The economic and social development of the path of socialism with Chinese characteristics is unprecedented.

The second is the international road, called “Building a Community of Shared Future for Mankind,” being China’s proposal to the world at the 20th CPC National Congress. The report had some major takeaways which rightly analyzed the historical juncture the world has reached. Our vision for the future should firmly take its roots from the lessons learned from history and addresses the deficiencies of current global affairs management.

China shows that it will continue its active participation to reform and build an inclusive global governance system, adhering to the spirit of multilateralism. It is committed to building a community with a shared future for mankind. To support this vision, China is inviting other countries in the world to work together on the implementation of three initiatives: the Belt and Road Initiative (BRI), the Global Development Initiative (GDI), and the Global Security Initiative (GSI).

Since its inception, the initiative to build a community with a shared future for mankind has been widely welcomed and discussed in the international community, especially in Latin America and the Caribbean. Of the 33 countries in this region that maintain diplomatic relations with China, 21 have already signed up to the BRI. This enthusiastic participation makes the initiative one of the most successful programs to realize the concept of a future-sharing community in Latin America and the Caribbean.

Some regional countries, such as the Republic of Cuba and the Bolivarian Republic of Venezuela, have also pledged their support for the GDI and GSI, as well as expressed their willingness to participate.

For developing countries, these three initiatives propose new situations that will require not only economic, political and social, but also cultural and academic efforts, to which China has also offered new proposals to the world.

In this sense, on January 12, the Venezuelan Center for China Studies and the Institute for a Community of Shared Future of the Communication University of China jointly launched the China-Venezuela Research Center for a Community with a Shared Future. This new center has been envisaged as a joint academic platform for building research networks between the two countries to facilitate collaborative projects, promote the dialogue of civilizations and initiate global communication on the concept of a community of shared future for mankind. Since then, we have been working closely together to seek the possibilities of cooperation and elevate our engagements to the next level.

Aymara Gerdel is the director of the China-Venezuela Research Center for a Shared Future Community, a professor at the Central University of Venezuela, and a PhD student at the University of International Business and Economics.