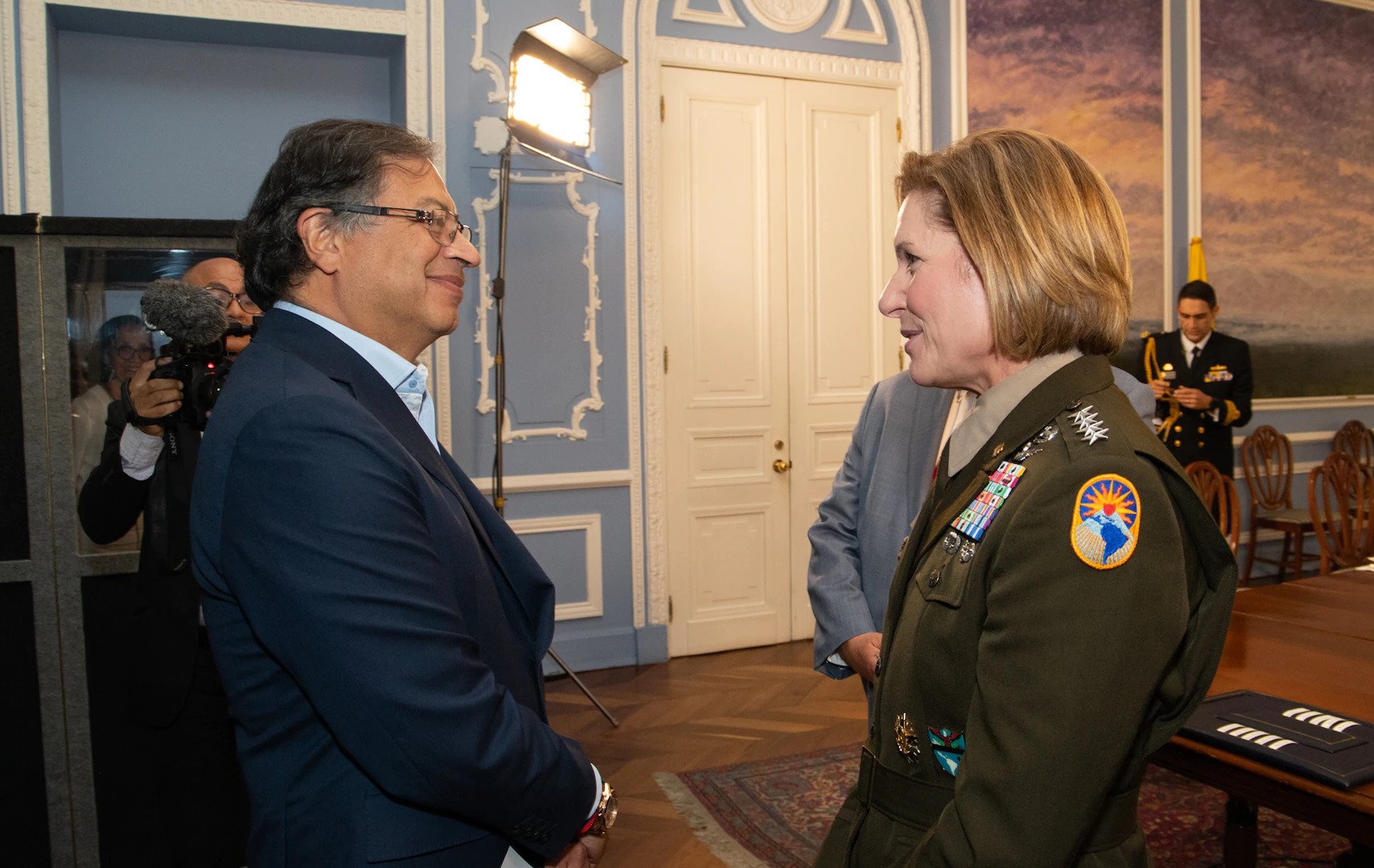 US Army General Laura Richardson, the commander of US Southern Command, met with President Petro on a visit to Colombia during September 5-9, 2022. Photo: Southcom.

NATO recently expanded to Sweden and Finland, has been de facto incorporated in Ukraine, and may extend to Georgia. Now, NATO’s entry into the Amazon is in the works under the aegis of newly elected President Gustavo Petro of Colombia.

NATO is a primary instrument of US imperial dominion. It is Washington’s praetorian guard projected on a global scale.

Earlier this month, President Petro invited US and NATO military forces into the Amazon on the pretext that the imperial war machine could be repurposed as “police” aimed at protecting the environment instead of the old ruse of the war on drugs. He proposed deployment of US Black Hawk helicopters to put out fires. Previous to the environmental alibi, the pretext for militarization of the jungle was narcotics interdiction.

Petro described his “conversation with NATO” as “strange,” but hastened to add “that’s where we are.” He legitimized the US military occupation of Colombia—a reported nine bases—as “more of a police unit than a military unit.” Incredulously, he claimed that the continued occupation was a “complete change in what US military aid has always been.”

NATO in Colombia
Colombia has been the poster child for the Monroe Doctrine—an assertion of US hegemony over the hemisphere dating back to 1823—and the leading client state of the US in the Americas. The South American nation was touted by both Hillary Clinton and Joe Biden in their US presidential campaigns as a model for the rest of Latin America.

In 2017, Colombia became one of NATO’s Global Partners and its first in Latin America. In February, Colombia conducted a provocative joint naval drill with NATO near Venezuela, which included a nuclear submarine.

Then on March 10, Colombia became a “Major Non-NATO Ally” of the US, giving Colombia special access to military programs. Biden explained: “This is a recognition of the unique and close relationship between our countries.”

From August 26 to September 11, US and Colombian militaries conducted joint NATO exercises. During this period, US Army General Laura Richardson, commander of the US Southern Command, made a five-day visit to meet with the newly elected president. The general gushed about “our number one security partner in the region,” describing Colombia as the “linchpin to the whole southern hemisphere.”

The SOUTHCOM commander also met with Colombian Vice President Francia Márquez to discuss implementation of the hemispheric “Women, Peace, and Security” initiative. Richardson concluded that the “Western Hemisphere is largely free and secure because of Colombia’s stabilizing efforts.”

When Petro first came into office, he differed from the US/NATO stance on the US proxy war against Russia in Ukraine, advocating a neutral negotiated peace on September 21. Two weeks later he switched, joining the US-led resolution in the Organization of American States strongly condemning Russia’s “unprovoked invasion” and unilaterally demanding Russian withdrawal.

The ‘War on Terror’ May Be About to Hit Europe

Green-washing of NATO in the Amazon
Legitimizing foreign military intervention into the Amazon region under the guise of environmentalism is not a new idea. Little concerned about the niceties of national sovereignty, Al Gore told the US Senate in 1989: “The Amazon is not their property. It belongs to all of us.”

More recently in 2019 and in response to fires in the Brazilian Amazon, French President Emmanuel Macron imperiously urged the G7 nations to intervene: “It is an international crisis.” UN Secretary General António Guterres echoed Macron’s sentiment, as did political leaders of other former colonial powers such as Germany.

Quora rhetorically asked: “Why doesn’t NATO invade Brazil in order to save the Amazon?” Touting “foreign action,” the NATO Association of Canada argued: “Environmental security threats such as the fires in the Amazon rainforest affect the global environment, and therefore require a system of collective security to address them.”

Combatting forest fires and other climate-driven disasters have been incorporated into NATO’s ever expanding scope. The militarists are not so much concerned about the environment as they are about perturbances that can upset the existing world order.

Because NATO is an accessory of the US empire, these new ecological tasks are best understood not as non-military functions but as the militarization of environmentalism. Their environmentally “woke” missions operate under such cover as the NATO Science for Peace and Security Programme and even the UN Environmental Programme, which cooperates with NATO.

Accordingly, Foreign Policy favorably considered the “militarization of the Amazon” on environmental grounds. A subsequent FP article on who will invade the Amazon predicted: “It’s only a matter of time until major powers try to stop climate change by any means necessary.”

Colombia – no longer an automatic US proxy
Notwithstanding his opening the door for US/NATO into the Amazon, Colombian President Petro has other non-military climate-change solutions in mind. In his UN address, Petro warned, “wars have served as an excuse for not ending the climate crisis.”

While oil producing nations such as the US, UK, and Norway are increasing extraction, Petro is going in the opposite direction. His proposed oil and coal tax to reduce production and fund social projects, ban on fracking, and especially the politically provocative unwinding of fuel subsidies could, however, cause further devaluation of the peso and public discontent.

Petro asked a recent US congressional delegation to Colombia to intervene with the International Monetary Fund (IMF) to forgive some of Colombia’s debt in exchange for investment in decarbonized economies. That would compensate, he explained, for the disruption of the world economy caused with US unilateral coercive measures (i.e., sanctions). Petro elaborated in a recent speech: “The US is practically ruining all the economies of the world.”

Petro also requested that the US congressional delegation consider footing the bill for deeding three million hectares of land to campesinos as part of his administration’s land-reform effort. The alternative, Petro adroitly suggested, would be to engage the US’s geopolitical rival China more fully in his energy transition initiatives.

Bloomberg reports that China has already concluded a number of significant renewable energy infrastructure deals with Colombia. Indicative of the shifting balance of trade, Colombia imported $14.8 billion from China compared to $14.1 billion from the US in 2021.

Former Colombian President Juan Manuel Santos had boasted in 2013 in reference to Colombia’s regional role as a US client state: “If somebody called my country the Israel of Latin America, I would be very proud. I admire the Israelis, and I would consider that as a compliment.” A decidedly new message is coming from President Petro, who is on record saying the US “does not love us.”

Indeed, Petro has made international headlines criticizing the US war-on-drugs policy, noting that while Colombia may have historically been the supplier of illicit narcotics, the US bears responsibility for being the biggest consumer. Further, from being Washington’s stand-in for destabilizing Venezuela, Colombia has flipped to making amends with its immediate neighbor and reestablishing amiable diplomatic relations.

Petro’s problematic association with George Soros
The rightwing accuses Petro of being a protégé of and financed by billionaire George Soros, whose Open Society Foundation has long been active in Colombia. Petro is portrayed by those elements “as manifesting that ideological trajectory of which George Soros is often seen as the patriarch.” Although reviled by the right, the obsessively anti-communist “puppet master of humanitarian imperialism” is no friend of left.

Even though Petro tried to distance himself from Soros in a tweet calling him a “speculative capitalist,” the new president met with Soros’s son and vice president of the foundation shortly after assuming the presidency to discuss joint ventures in the Amazon.

Petro’s predicament – a small country in the shadow of the US hegemon
Now that the rightwing associated with former President Álvaro Uribe has been discredited and electorally defeated, US imperialism needs a new face in Colombia. Petro’s ambiguous positions are best understood in historical context. For the first time in two centuries, putative leftists have run and lived to assume the presidency of Colombia, a country which has not only been a client state of the US but its lead proxy.

Their win is an essential step in the long struggle to free their troubled country from its erstwhile subjugation to the colossus to the north. But it must be emphasized that it is naïve to believe that Washington is about to allow such a seismic shift to the left to endure uncontested.

Given the domination of Colombia by its US-backed military, Petro was concerned not only about winning the election but surviving afterward. Both Petro and his running mate Márquez survived assassination attempts on the campaign trail. Even the Voice of America warned about the “specter of assassination.”

The new president of Colombia is a former leftist guerilla, who has shifted toward the center politically. But in comparison to the far-right rule of Uribe and his successors in Colombia, the election of Petro and his vice president Márquez constitutes a sea change in the progressive direction.

The regional movement towards integration and independence poses a challenge to the US drive to impose its hegemony in the Americas. The change in the executive of Colombia further advances this movement. But Petro has inherited major institutional constraints and is subject to enormous pressures.

Paradoxically, the very conditions that Petro campaigned against, which swept him into office, have now become his puzzles to solve. Strong inflationary winds are buffeting society, generated by global economies with which small countries like Colombia must integrate but over which they have minimal control. As the cost of living goes up, Petro’s popular support at home suffers erosion.

Petro’s predicament is being caught between the popular demand for progressive change and the legacy of US imperial domination. Colombia will need to find the means to resist the further projection of US military command in the form of NATO. The Amazon doesn’t need arsonists to put out its fires.