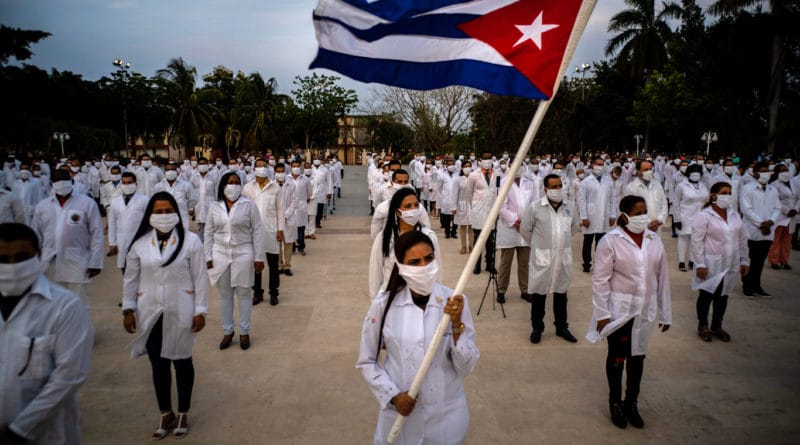 As the coronavirus pandemic grows worse in many countries, Cuba has answered an urgent South African request for aid, sending 217 medical personnel to the country.

Amidst a worsening COVID-19 pandemic, Cuba has answered an urgent South African request for aid. 217 medical personnel, including family physicians, epidemiologists, health technology engineers and biotech workers touched down Sunday evening, eager to help their African ally. Dr. Reynaldo Denis de Armas, the head of the medical brigade, informed the press that they would first go through a quarantining period then be dispersed throughout each of the country’s nine provinces. Along with Egypt, South Africa currently has the highest number of confirmed positive coronavirus cases in Africa, although the scarcity of testing kits means numbers from the continent are likely only pale reflections of the gravity of the problem.

Despite the Caribbean island’s poverty (according to the CIA World Factbook, Cubans have less than a third of the GDP per capita of even their Puerto Rican neighbors), Cuba has sent over 1,200 healthcare professionals to more than 20 countries around the world – one of very few countries to export any doctors whatsoever during the global pandemic.

To many in the West, the connection between Cuba and South Africa may appear incongruous, but that is not the case to anyone from the Global South. Even as Western nations like the United States and Great Britain supported the white supremacist regimes of southern Africa, Cuba played perhaps the key role in decisively defeating apartheid, sending hundreds of thousands of troops to oppose South African annexation of its neighbors, resoundingly beating apartheid forces and dealing a mortal blow to the myth of white supremacy, ushering in the demise of the regime.

Dr. Helen Yaffe of the University of Glasgow, author of the new book “We Are Cuba!: How a Revolutionary People Have Survived in a Post-Soviet World”, told MintPress that she was “not at all surprised” to see solidarity between the two nations, noting,

Cuba has a long and principled history of solidarity and practical assistance to the people of Southern Africa. Their military support to the newly independent Angolan nation, helped to weaken the racist apartheid regime in South Africa which invaded the country in the mid-1970s. This contribution was acknowledged by Nelson Mandela after his release from prison. Cuba was the first country outside of Africa which he visited.”

Yaffe explained that by the end of the apartheid regime in 1991, some 300,000 Cuban soldiers (a great number of them Afro-Cubans) and 50,000 civilians, including healthcare workers, teachers and construction workers, had served in defending the newly independent Angola from a white supremacist takeover.

Since the end of apartheid, Cuba has eschewed the guns but greatly increased its medical internationalism. As Yaffe explained:

In 1999, the Cuban government set up the Latin American School of Medicine (known as ELAM for its Spanish acronym) to provide medical education to students from the region enabling them to graduate as healthcare professionals. Very quickly it opened its door to students from around the world, including South Africa. Over 1,200 South African students have been among its beneficiaries. Thus, the medical ties between these two countries are well established. In the field of medical science, South African is one of nearly a dozen countries in the global south with which Cuba has established a biotechnology joint venture.

ELAM is famous all over the world for educating doctors for free, on the understanding that they will go back to their communities and treat the neediest people first. By 2019, 29,000 doctors from 105 countries had graduated from the Havana-based medical school. Half of them were women and the majority from poor backgrounds. Former World Health Organization Director-General Margaret Chan applauded ELAM, stating that, “For once, if you are poor, female, or from an indigenous population, you have a distinct advantage [in admission]. This is an institutional ethic that makes this medical school unique.” Even young people from the United States – a country that has been crushing Cuba for decades with economic sanctions – can study for free. Last month, MintPress spoke with a number of American students and graduates from the school. Dr. Sarpoma Sefa-Boakye, a Ghanaian-American ELAM graduate practicing in San Diego, said her colleagues are always amazed when they find out she was paid by the Cuban government to study medicine and graduated debt-free, also estimating that more Africans train in Cuba to become doctors than in Africa itself, a testament to the island’s commitment to revolutionary medicine.

The country’s pharmaceutical and biotechnology industries are also playing their part. Interferon Alpha 2b, a Cuban drug developed to fight Dengue Fever, Hepatitis and shingles, has proved highly useful in boosting COVID-19 infected patients in China; 45 countries have now requested the antiviral drug for use themselves. Doctors have also volunteered to travel to hotspots such as Italy to help fight the outbreak. “Cuba’s sustained training to its medical and technical personnel, and to that of other nations, and its scientific research in the development of medicines, have allowed it to provide invaluable support to many other countries in the world,” said former Jamaican Prime Minister, P.J. Patterson. Meanwhile, the Prime Minister of St. Vincent and the Grenadines was so happy to see a contingent of Cuban staff come to his country that he met them himself on the airport runway.

Prime Minister of Saint Vincent and the Grenadines speaks about the support of the Bolivarian Government of Venezuela and the Government of the Republic of Cuba to confront covid-19 in SVG @ComradeRalph @FPerezSantana @MFAVenezuela @IVCC_SVG @telesurenglish @jaarreaza pic.twitter.com/nFkEg2VgKp

However, the Trump administration has accused Havana of cynically using medical aid to deflect from its human rights record, putting great pressure on countries in the Global South, and even Europe, to reject Cuban aid. As right-wing governments came to power in Ecuador, Bolivia and Brazil, their governments quickly expelled the Cubans working within their borders, often accusing them of being terrorists or mercenaries. However, amid a worsening pandemic, the Brazilian Health Minister is now asking them to return. Meanwhile, without a functioning healthcare system, Ecuador has been transformed into perhaps the country worst affected by COVID-19, as MintPress reported earlier this month.

If medical internationalism is merely a cynical “soft power” ploy, as the U.S. government insists, then the Cubans are not doing it very well, focusing on the poorest, least influential countries in the world and working with the poorest people in those countries. That the Trump administration should see any gesture as a cynical attempt to bully, intimidate or increase their power is perhaps unsurprising, given their own actions. The U.S. currently leads the world in seizing and stealing medical equipment bound for other countries. It also tried to compel a German pharmaceutical corporation to move production to the U.S., in order to make sure that America alone had access to and control of any coronavirus vaccine it might produce. Trump reportedly wished to ensure that it would only be available on a for-profit basis.

Washington appears to see Cuba’s genuine solidarity in the face of such adversity as a threat: the threat of a good example to other countries, showing them that “another world is possible,” as the revolutionary phrase goes. People in other nations are often just happy they can see a doctor.

Featured image: A brigade of Cuban health professionals who volunteered to travel to South Africa to assist local authorities with an upsurge of coronavirus cases, attend the farewell ceremony in Havana, April 25, 2020. Ramon Espinosa | AP