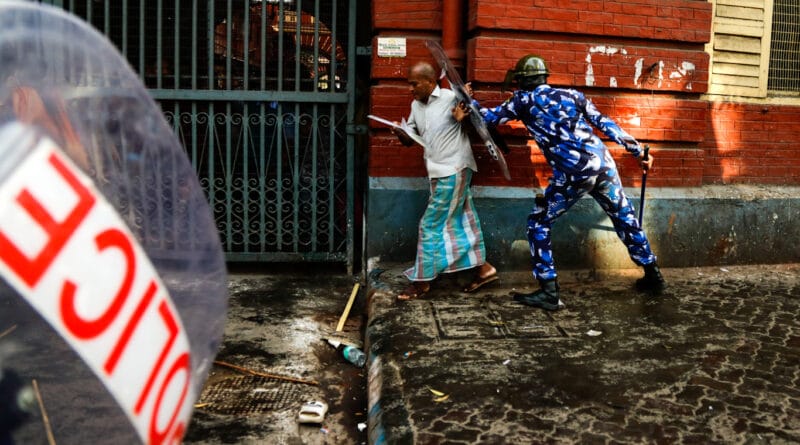 Twitter’s actions are quite a departure from 2019 when it delayed a network upgrade in Iran at the behest of the US government for fear that it could interfere with anti-government demonstrations.

The far-right government of Narendra Modi is attempting to silence dissent online amid enormous national farmers’ protests — and it is finding willing partners in Silicon Valley social media giants.

Earlier this week, the Indian government successfully lobbied YouTube to remove a number of videos, including a popular Punjabi song that had become an anthem to the protest movement. Indians trying to access the song “Ailaan” by Kanwar Grewal, a video amassing over six million views in just four months, are met with the message: “This content is not available on this country domain due to a legal complaint from the government.”

The Modi administration has also sought the removal of over 1,100 Twitter accounts it claims were spreading disinformation. Twitter has largely complied with the request, permanently deleting at least 500 accounts and blocking an unspecified number of others from view inside India. It also announced that it had agreed to suppress certain hashtags and search terms associated with the protest movement that it deemed to be “harmful,” although it did not specify which ones or what its criteria was for making the decision. However, it claims it did not take action against the many journalists Modi had ordered removed from social media.

This is quite the departure from Twitter’s actions amid protests in Iran in 2019. There, the service was set to temporarily shut down for a network upgrade. However, at the behest of the U.S. government, it delayed its upgrade in order that Iranians could continue using the service to organize and coordinate anti-government demonstrations.

On Tuesday, authorities raided the offices and homes of senior journalists at NewsClick, a progressive independent media outlet in Delhi that had taken the lead in covering the monthslong farmers’ rebellion. A number of other reporters are still in custody, according tothe Committee to Protect Journalists.

India is almost universally described as the world’s largest democracy. However, the increasing restraints on a free press have put that title in question. The country dropped to 142nd (of 180 states) on Reporters Without Borders’ index of media freedom last year. Eight journalists have been charged with crimes (including sedition) for their actions while covering the protests. Four have been killed in the past 12 months. And while online censorship is often associated with states such as China, India leads the world in Internet shutdowns, with more than all other nations combined. Many, including in conflict regions like Jammu and Kashmir, last for hundreds of days at a time. There were 83 shutdowns across India in 2020 and 469 since 2012. Last week, the capital Delhi had its Internet temporarily suspended.

Prime Minister Modi boasts an enormous online presence. He has over 65 million followers on Twitter, more than any political figure except Barack Obama. He also has over 51 million Instagram followers and owns the seventy-eighth most “liked” Facebook page. Modi and his Hindu nationalist BJP party have used their online empire to directly reach hundreds of millions of Indians through their smartphones, encouraging them to develop a “personal connection” with their prime minister.

As such, he is a massive money spinner for Silicon Valley, his presence being a primary factor in the growth of the gigantic Indian market. The fact that Modi is not only the source of huge profits for social media but also ultimately in charge of the bodies that regulate them makes it particularly difficult for them to reject his requests. As such, this highlights the conflict in interests between making money and providing a service that aids the free flow of vital information.

The farmers’ protests were sparked in the fall after the government’s attempts to change the way in which the country’s food producers sold their crops. For decades, government buyers had guaranteed a minimum price on 23 essential commodities. However, the Modi administration is attempting to change the laws to allow private buyers into the market. Farmers fear that this will allow the government to retreat, leaving India’s small farmers at the mercy of international finance and agribusiness corporations. The government has refused to pass laws forcing new private buyers to offer a minimum price. It is also proposing removing some of the crops from the essential commodity list, an action that opens the door to speculation and hoarding.

In late November, an estimated 250 million people joined a general strike organized by farmers, regarded as the largest industrial action event in world history. The Biden administration, however, has backed the pro-free-market, pro-corporate changes Modi is proposing. “The United States welcomes steps that would improve the efficiency of India’s markets and attract greater private sector investment,” a State Department official said.

With Biden in his corner, it is doubtful that the big social media companies will provide a great deal of resistance to Modi’s censorship demands, meaning that India’s fragile democracy might join its farmers in being the big loser out of this situation.