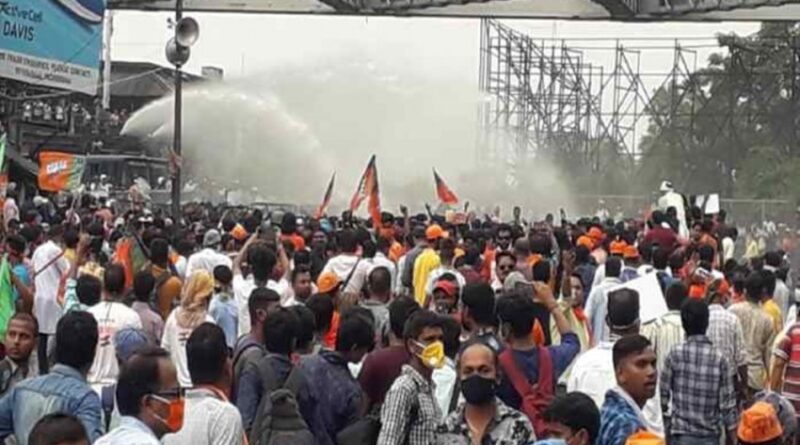 As per reports, about 150 protesters were injured, 100 have been hospitalized, and about 500 arrests have been made.

Left-wing parties in India’s eastern state of West Bengal organized a 12-hour stet-wide shutdown on Friday, February 12. They were protesting the use of brute force by state authorities against the protest demonstrations held on February 11.

Protesters who were marching to the state secretariat (Nabanna) in the capital Kolkotta on February 11 were water cannoned and baton-charged by the police. As per reports, about 150 protesters were injured, 100 have been hospitalized, and about 500 arrests have been made.

The Students’ Federation of India as well as the democratic Youth Federation of India were the key organizers of the march. The protests were organized to demand more employment opportunities in the state. The protesters also demanded an end to the commercialization of education. A demand to roll back the recently enacted farm laws by the central government was also put forward.

RELATED CONTENT: Farmers’ Protest in India: Price of Failure Will Be Immense

Central Secretariat Member of the Students’ Federation of India (SFI) Nitheesh Narayanan said, “Yesterday, thousands of students and youths gathered in West Bengal, marching to the state secretariat, demanding better education and job facilities for all. But the march, with their just demands, was suppressed by the police machinery and also the goons of the ruling party, Trinamool Congress.

Hundreds of students and youth who were participating in the march, for everyone to live a better life, were suppressed, attacked, and many of them are hospitalized with serious injuries. Many of our comrades are behind bars now.

The only crime they have done is that they have conscience of the inefficiency of Mamata Banerjee’s government in providing jobs and educational facilities for the students and youth in the state. Today, the SFI has called an all-India protest concerning the police repression, the ruling class oppression in West Bengal. We request everyone to stand in solidarity with the fighting students and youth in West Bengal.”

The student activists called the Nabanna Abijijan (Nabanna movement) a movement to show “red cards” to the state government. Their intention was to march to the state secretariat, but police dug up roads and erected iron and concrete barriers to prevent the protesters from reaching Nabanna. Batons and tear gas were use against the march.

The ruling TMC has a history of violence against left cadres since it came to power in 2011. The violent repression of the march comes in the wake of the major Farm Law protests in recent months.