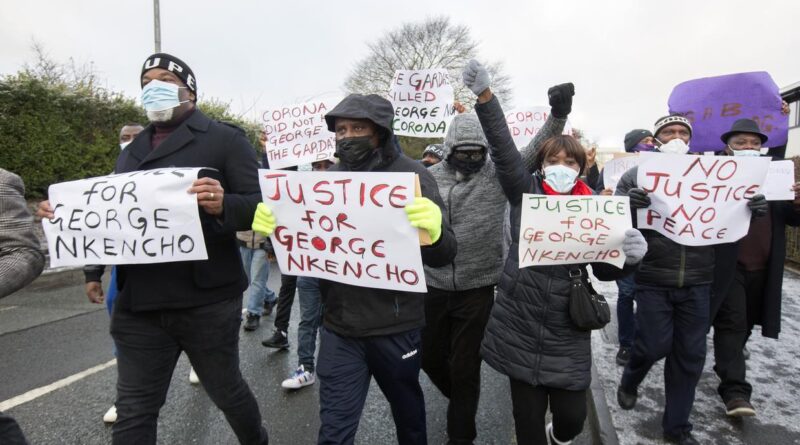 Ireland has a history of occupation, rebellion and civil war. All of which are the outworkings from Britain’s colonial occupation of Ireland. It began in the 12 th century and continues today through the partition of Ireland in 1922.

We have suffered from famine, repression, cultural genocide, sectarian division and mass murders.

Can we now add ‘racist’ police killings to that list?

It was on December 30, 2020, that George Nkenko, 27, died in a hail of bullets unleashed by an armed response unit of the Gardai Siochana, the Irish Police force.

As a rule, the Police in Ireland do not carry guns. Armed tactical support units are deployed throughout the city. These highly trained officers have their weapons securely stored in their vehicles before use.

On December 30, an armed unit responded to an ongoing incident in Clonlee, West Dublin.

There were alleged reports, that a man assaulted an employee of a local supermarket, Eurospar in the Hartstown shopping centre. He then allegedly produced a knife and threatened staff, in the Post Office.

Unarmed Police attended the scene and followed George Nkenko, as he traversed the short distance to his family home, in Manorfields Drive. As many as 15 officers were said to be involved.

Once George returned home, the situation appeared to deteriorate.

Mr Nkenko was standing directly outside the family home. Inside his mum and other siblings watched the situation unfold.

The Police had surrounded George. They ushered his family back inside the house and closed the door over.

By doing this, they prevented George from entering the family home and prevented the family from de-escalating the situation.

The Police then used what they called a ‘graduated response’ to control the situation.

First, they were able to get close enough to George, while protecting themselves,to use Pepper Spray.

When this did not achieve the desired outcome they then discharged their Tasers.

Again the desired result was not forthcoming so eventually, someone in charge gave the order ‘shoot to kill’?

It was a ‘shoot to kill’ operation, as the post mortem confirmed to the family that George had been shot 6 times.

George had no bulletproof garment. No magical shield to ward off the deadly fire.

The Pepper spray Failed. The Tasers failed. The six bullets did their job, and George was dead.

Shot to death by an armed Irish Police, response unit.

Murdered in front of family.

From the initial police response at 12.15 at the shopping centre, to Georges death at 12.35 outside the family home, this whole episode took a grand total, of exactly 20 minutes.

The hail of bullets that cut his down his life, in full view of his family, lasted 8 horrifying seconds.

Two of the bullets entered the hall, where the family had gathered.

What else, could the police have done, was the response of many?

An armed man in an agitated state? Surely the police acted in the interests of the community?

Well, they did not act in the interests of George Nkenko nor his family.

Here is what many of you may not know.

George was born in Nigeria and moved to Ireland with his family at the age of seven.

A quiet unassuming person. A younger George, allowed his personality and his passion to express itself on the football pitch.

He had a small circle of friends and mainly kept to himself.

He excelled on the football pitch and according to reports from his friends on the team, he would arrive early for football training with his closest friend and they both stayed on after the training session was over, in order to improve their game and hang out together.

Just as many teenagers and young adults do.

The team had a close liaison with the local Gardai community outreach team, who at times took the team to away matches on an official police transport bus. This raised a few eyebrows on the opposition teams, when a police bus arrived and a football team that contained a few players of African Irish descent disembarked.

No one will know for sure, apart from George Nkenko’s family, when exactly George began to suffer from poor mental health. One contributing factor may have been the brutal racist stabbing of George’s closest friend and footballing companion Toyosi Shitabey. Both played for the local Insaka Glentoran Football team.

Mr Shitabey was stabbed to death in Dublin in 2010, in an attack with racial overtones.

No one was ever charged with the murder.

Friends have described how George began to drift away from the football team and became isolated, having watched his best friend brutally murdered in front of him.

The failure of the state to offer help to George in 2010 and justice for Toyosi Shitabey may well have led to fatal this shooting a decade later.

George watched in horror as his friend’s life was stolen from him in front of his very eyes .A trauma revisited on his family, as they would have to witness his death 10 years later?

Two failures by the state and its law enforcement officers may have created the circumstances that led to George’s death?

Two weeks of protest followed George’s murder in central Dublin and at Blanchardstown Gardai Station where the Armed response unit officers are based.

They chanted ‘No Justice, No Peace, No Racist Police’

Black Lives Matter held protests in Dublin. The Nkenko family, friends and supporters, among the Irish Nigerian Society protested at the police station.

Initial reports said George was struck by three bullets and five were discharged. Two of which entered the house where George’s family were huddled in the hallway. The autopsy said George was shot six times in total.

TWO OF THE BULLETS WOULD PROVE FATAL PIERCING VITAL ORGANS.

Could the situation have been handled differently.?

The reality, is the Gardai, refused to allow the family the opportunity to de-escalate the situation. They were informed George had mental health problems.

Was a trained mental health worker in attendance?

Could the police have continued to contain the situation while awaiting professional help for George?

Did they have to use lethal force?

As is often the case, the State will claim lack of training, lack of resources, lack of time as contributing factors in its decision to execute George Nkenko.

While claiming they were trying to protect his family, the Gardai discharged two rounds into the family home embedding in the hallway were the family had gathered.

Would this have happened if the man with the kitchen knife was white?

Up to the very second that George was murdered, all he had done was allegedly assault one person by punching them and then making verbal threats with a knife ,and for that they killed him.

Perhaps George Nkenko carried that knife to protect himself?

Having watched his best friend die in front of him in a racist attack maybe, just maybe George was that frightened by the failures of the state to protect him and his friends that he carried that knife that day in case he needed to defend himself?

This is a story we don’t always hear in a two-minute news bulletin.

How a young reserved man, who was good at football and had his circle of friends is severely traumatised by the racial murder of his closest friend.

Becomes isolated from society through a combination of post traumatic stress disorder and no state help, through counselling?

Whose mental health then deteriorates and carries a knife for personal protection on the streets he now fears as being unsafe?

He is then gunned down by the state.

This is not America, with its history of violence, against the Black Afro American, Asian and Latino peoples.

This is not Ferguson, Missouri nor Minneapolis, Minnesota.

This is Clonlee West Dublin.

We do have a rising, racist fascist element in Ireland.

It has always been here.

They and their sick politics are sadly still a part of the Irish Nation.

The Nkenko family have been inundated with racist online attacks that described George as a known, violent criminal, convicted of over 30 crimes.

The racists went into overdrive to demonise George Nkenko and sanctify the state action by the police.

It became so bad the Police made a public statement confirming George Nkenko had no criminal convictions and was unknown to them.

I asked if George had been white would he still be alive?

On June 21,2020, armed Police stormed a house in the Willow Wood area of Blanchardstown,Dublin 15, where a man had reportedly attacked a women with a Samurai sword.Using stun grenades they entered the house subdued the white attacker and brought him to custody.

The man had murdered his wife and several weapons were recovered.

‘It is understood a number of less than lethal weapons, including stun grenades, were deployed by gardaí as they entered the house by force’

As reported in the Irish Times, ‘Emmanuel Nkencho, Mr Nkencho’s younger brother who briefly spoke to the crowd, told The Irish Times his family was “traumatised” by the shooting. “The past 24 hours have been hell,” said Mr Nkencho, who watched the incident unfold from inside his home.

“I have no brother now, he was the eldest in the family. I have to take care of my mum now. I just want justice for my brother.”

He said his brother had a “kind heart” but had suffered from mental health issues’ ‘ in recent years. “He didn’t really go outside, just to the shop and back. He has his little friend group and that’s it. My brother never bothered anybody, he just got on with his own life.”

Mr Nkencho said he would like to speak directly to gardaí to ask them questions about Wednesday’s shooting. “Why couldn’t more than 15 gardaí disarm one man?,” he asked. “Until I know why, I will not be at peace.”

Two deaths, of two Black people, who were close friends, ten years apart . Will anyone ever be charged?

How will the family of George Nkenko, who came to Ireland for a better life, ever come to terms with his brutal murder.Being killed on the family doorstep, directly outside their home, in full view ,while the police refused George the opportunity to go home, or for his family defuse the situation?