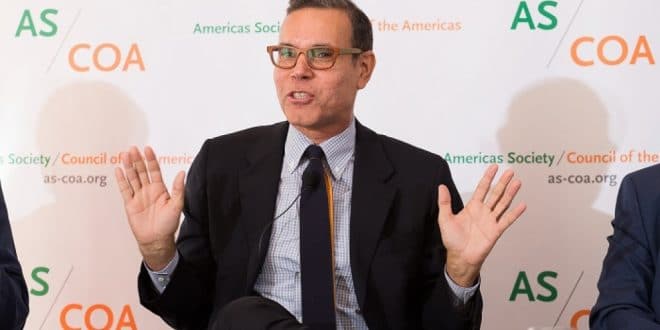 Venezuelan opposition businessman and analyst Luis Vicente León, known for his analysis and surveys on political and economic events in Venezuela, expressed his opinion regarding the leadership crisis and the current scenarios in the Venezuelan opposition. In an interview conducted by the Russian news outlet Sputnik, he criticized Juan Guaidó’s little or no ability of political maneuver and opined on his “interim government.”

León made it clear that the US support for Juan Guaidó, materialized in the sanctions against Venezuela, is the only lifeline of the “interim government,” since the opposition alone is incapable of maintaining unity around a plan or a leadership.

He further confirmed that the levels of acceptance of the opposition among the people have been gradually decreasing as time passes, as the opposition has been unable to achieve any of the objectives declared at the beginning of the so-called transition, that León himself supported and applauded since the beginning.

“Can the opposition remain in the stalemate that has led it to pulverize its connection with the people, to eliminate its hope for change and to reduce the support for international assistance?” asked León. “So who is in worse condition? The opposition.”

RELATED CONTENT: Capriles Questions the ‘Leadership’ of the Opposition in Venezuela

Regarding the illegal control of Venezuela’s assets abroad, Leon considered that the decline in the quality of life of Venezuelans, including of sectors that do not support the government, only demonstrates the instability of opposition leadership, deepens inequality, and brings to the open the internal frictions in the opposition.

In León’s opinion, at this time there is nothing that endangers the government of President Maduro. “The dangers are greater for the quality of life of the population, for the permanence and stability of the opposition,” he opined. “Considering as opposition not only to those who control assets abroad or have representation, but rather those who are fighting inside the country to bring about a real political change and encourage the people to fight for the defense of their rights and interests.”

This statement by Luis Vicente León places him at the center of criticism by the Venezuelan opposition that, by not tolerating dissident voices, has branded him a traitor and collaborator of Nicolás Maduro, a claim for which there is no evidence.

Featured image: Luis Vicente León at an international forum organized by the Americas Society/Council of the Americas. File photo.