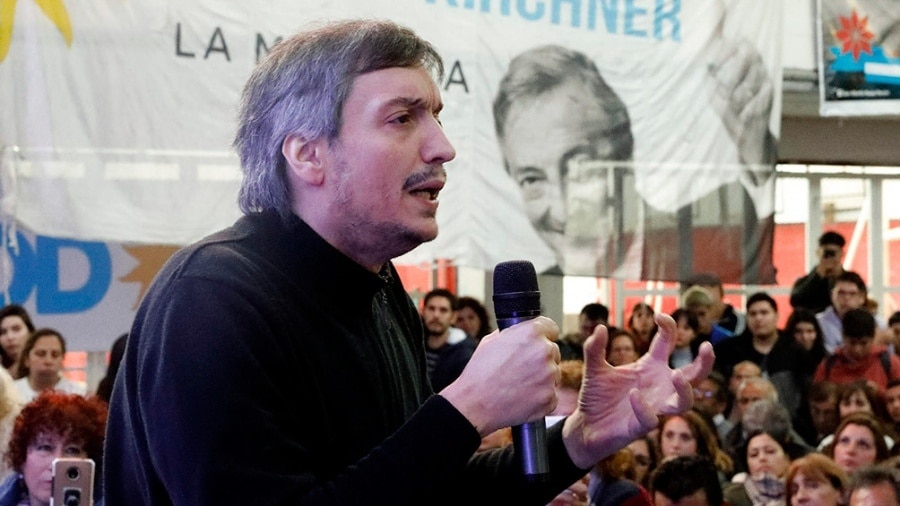 Máximo Kirchner resigned on Monday, January 31, from his responsibility as the head of the Frente De Todos (ruling party) in the Congress of the Argentine Republic. The deputy, who until Monday presided over the block of deputies of the ruling party, made his decision public through a statement in which he expressed his disagreement with President Alberto Fernández’s economic policy, embodied in the recent agreement with the International Monetary Fund (IMF).

With this position, the son of former President Néstor Kirchner and current Vice President of Argentina, Cristina Fernández, distanced himself from the president, whose actions have been classified as “lukewarm” by the Latin American left.

Communiqué from the presidency of the bench of deputies of the Frente de Todos:

I have made the decision not to continue in charge of the presidency of the Bench of Deputies of Frente de Todos. This decision stems from not agreeing with the strategy used and much less the results obtained in the negotiation with the International Monetary Fund (IMF), carried out exclusively by the economic cabinet and the negotiating group that responds to and has the absolute confidence of the President of the Nation, to whom I never stopped informing my view for not reaching this result.

I will remain within the block to facilitate the task of the president and his entourage. It is better to step aside so that he can choose someone who believes in this program of the International Monetary Fund, not only just now but also after December 10, 2023.

Since the day that, in 2018, Mauricio Macri brought the IMF back to Argentina, whom Néstor Kirchner, through the historic payment of a debt of $9.8 billion, managed to banish from our country for being the trigger in every economic crisis since the return of democracy and whose most eloquent symbol was the crisis of 2001, we knew that this would be the biggest problem for our country. Especially due to the magnitude and exceptionality of the loan that reached $57 billion (almost 6 times the amount paid back in 2005) and of which $44.5 billion were disbursed in just one year, in addition to forgiving each and every one of the breaches of the Macri government and violating its own Constitutive Statute. Macri had to win the election.

I do not aspire to a magical solution, only to a rational one. For some, pointing out and proposing to correct the errors and abuses of the IMF that never harm the agency and its bureaucracy, is irresponsible. For me, the irrational and inhuman thing is not to do it. At the end of the day, the IMF shows that reason is not the important thing, it is only about force. Perhaps its name should be International Monetary Force. And as I see that they are always interested in expenses, they could stop spending on expensive economists since to do what they do, only people who know how to squeeze are enough, promising hell if what they want is not done.

And if anyone doubts my level of pragmatism, I remind you that as head of the bench I accompanied the passing of the Law that approved the restructuring of the private debt in foreign currency, without capital reduction but with interest reduction, executed by the government in 2020, despite strongly disagreeing with some of its articles. I understood the context and the pandemic was getting worse.

I put aside prejudices as well as grievances to form the Frente de Todos, but I did not put aside my convictions. I do not regret having acted in a way that was not reciprocated. I understood from the moment that CFK [Cristina Fernández de Kirchner] gave us the instruction to form the Frente de Todos that what happened until its formation could not stop what was to come. Unfortunately I was one of the few who acted that way.

It would be more than incorrect to cling to the Presidency of the Block when it is not possible to accompany a project of such decisive centrality at present and in the years to come. Some may wonder what option I offer. In principle, call things by their name: do not talk about a tough negotiation when it was not, much less talk about “benefits.” The reality is harsh. I saw President Kirchner burn out his life in this type of situation.

At the year-end dinner, held at Quinta de Olivos, each one of the members of the block, as well as the president of the nation, could hear me when I assured that any of my colleagues could take my place.

Likewise, no Deputy from our block received any instruction to express themselves against the imposition of the Fund. It is also true that they did not receive any instruction to do so in its favor. And it is for this very reason that I decided to move away from the president so that he does not feel “pressured,” as in so many occasions his entourage has expressed. Pressure? No. That is done by the International Monetary Fund.

I thank each colleague for the work they have done: the Law of Fire, the Solidarity and Extraordinary Contribution, Front Labeling, the Trans Quota Law, the Work from Home Law, the Cold Zone Law, the Law on Homeless People, the PREIMBA Fund, Media Equity and many others that sought to partially meet the demands and needs of our citizens. Many of those laws were approved in agreement with different benches while others were not, as is logical in a democracy. And others, as the recent Law of in Personal Assets, of vital importance for the government, which was achieved by the work of agreements made in the Chamber of Deputies.

I will continue working, as I have done until now, with an agenda that includes laws such as Wetlands, Production of Medicinal Cannabis and Industrial Hemp, Access to Land, Packaging, Promotion of Federal and Inclusive Agro-industrial Development, and Promotion of the Automotive Industry.

I also thank the presidents of the other blocks, with whom we have argued strongly but always without disrespecting each other, and from whom I also learned a lot. Among other things, to regret for not having raised one’s voice when one did not agree on issues of extreme centrality promoted by their own government.

Due to historical understanding, by popular mandate and by political decision, I do not seek to point out those who critically accompany or openly celebrate [the agreement], as I have read. Hopefully everything turns out in the coming years as the Argentine political, economic and media system promises, and my words be those of someone who, based on historical experience, was just wrong and did nothing but leave a place to continue helping. I do not seek to be to the left, much less to the right of anyone, categories that are no longer enough to explain reality.

A warm embrace to all my colleagues, and to each Argentinean man and woman, with whom, vote however you vote, I share the same soil and the same flag.

The resignation of Máximo Kirchner comes just days after the Argentine government, headed by Alberto Fernández, reached an agreement with the IMF to pay back a controversial loan contracted by the previous president, Mauricio Macri. That loan, which the IMF had given by violating its own statute, as Kirchner pointed out, has been considered illegal by many experts, while the demand remains, of various social movements and organizations supporting the ruling party, that the Fernández government not repay the debt. The recent agreement has also been severely criticized by many. In fact, on January 26, Vice President of Argentina, Cristina Fernández de Kirchner, accompanying Honduran President Xiomara Castro in a public gathering in Honduras, denounced the International Monetary Fund and its debt traps that prevent developing countries from progressing. Some political analysts pointed out at that time that Cristina Fernández’s speech in Honduras was not only about the debt crisis of Honduras but that of Argentina as well.