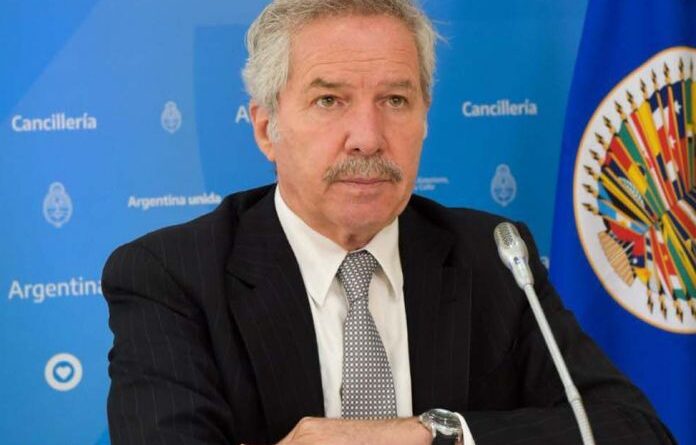 This Wednesday, the Foreign Affairs Minister of the Republic of Argentina, Felipe Solá, warned that the mandate of the Organization of American States (OAS) is not fulfilled if the Secretary General, Luis Almagro, makes decisions according to his personal interests.

This was stated during his speech at the OAS General Assembly, where he pointed out that the body’s position on the crisis in Venezuela, and the one that occurred in Bolivia after the fall of Evo Morales, were the product of Luis Almagro’s administration.

RELATED CONTENT: Argentina Demands That Áñez Take Responsibility for Detention of an Electoral Observer and Deputy

In this regard, Solá explained that “the Secretary General must act in accordance with the action and policy decided by the political bodies of this organization, in compliance with their function of promoting relations between States. This mandate is not fulfilled by adopting personal positions, or positions that don’t have the same meaning or emphasis according to the country or government in question, much less when they end up fueling the problem they should solve.

With these remarks, Solá shows that both the crisis that Venezuela is experiencing thanks to the blockade and coercive and unilateral sanctions exercised by the United States, and the coup that overthrew Evo Morales in Bolivia are in part the result of Luis Almagro’s work.

On the other hand, Solá indicated the Argentine government disagrees with “sanctions and the blockades imposed on Venezuela, as has been done for many years with Cuba,” he said in this regard.

The Argentine Republic abstained from voting for a resolution to reject the parliamentary elections on December 6 in Venezuela.

This was known this Wednesday after the OAS approved the document entitled “The lack of minimum democratic conditions to guarantee free, fair and transparent elections in the Bolivarian Republic of Venezuela,” making another effort to boycott the constitutional elections that will designate a new National Assembly. The results yielded 21 votes in favor, 4 against and 9 abstentions.

Antigua and Barbuda, Dominica, Nicaragua, Saint Vincent and the Grenadines voted against.