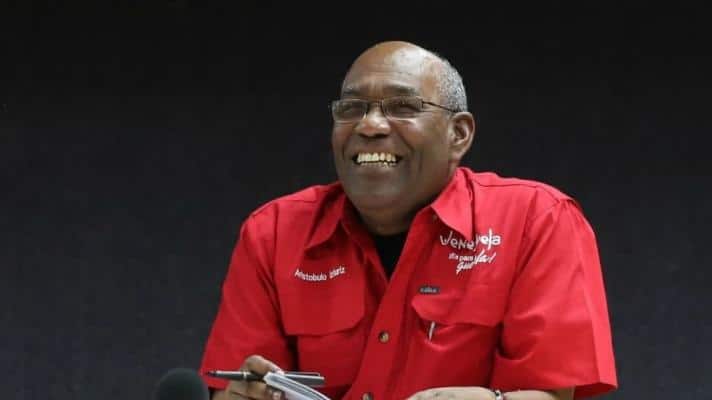 This Tuesday, April 27, at night, the Venezuelan professor and politician Aristóbulo Istúriz passed away. Originally from Curiepe (Miranda state), “Aristóbulo the prof,” as they called him, was the Minister of Education and Vice President for Social and Territorial Socialism of Venezuela.

His long political career began in the 1970s as a social activist and continued through his service in various sectors of public service in the governments of Commander Hugo Chávez and of President Nicolás Maduro.

• He was elected as the mayor of the Libertador municipality of Caracas, in 1992.
• He was one of the founders of the Patria Para Todos party in 1997.
• Between 2001 and 2007, he was Minister of Education in the government of Hugo Chávez, as well as coordinator of the Social Cabinet and president of the Presidential Commission of Mission Robinson, the Venezuelan literacy program launched with the help of Cuba.
• He was elected governor of Anzoátegui state and held the position from 2012 to 2016.
• President Nicolás Maduro appointed him vice president of Venezuela in 2016.
• He assumed the Ministry of People’s Power for Communes and Social Movements as of 2017.

Beyond the positions he assumed in the Venezuelan Government, the Chavista politician is remembered for the role he played in important moments of the Bolivarian Revolution. For example, for his participation in the 1999 Constituent Assembly and in the facilitation of the Robinson Mission to eradicate illiteracy in Venezuela, but also during the 2002 coup d’état against Hugo Chávez, when he assumed a leading role in the restoration of democracy after right wingers, with the help of the United States and Spain, ousted President Hugo Chávez for less than 48 hours.

In honor of the memory of Aristóbulo Istúriz, we will cite two moments that Commander Chávez recalled as anecdotes shared in their years of political battles:

RELATED CONTENT: Classes Begin in Venezuela Today Under the “Every Family a School” System

The first thing we did was put an end to the illiteracy that still plagued Venezuela, and today Venezuela is a territory free of illiteracy. Aristóbulo Istúriz, by the way, was the Minister of Education when we began that powerful task, [that] historic and heroic journey, and in less than two years we put an end to the illiteracy of 200 years and more, and then we created the Sucre Mission. There are youth studying everywhere, and today Venezuela is the fifth country in the world in university enrollment thanks to the Sucre Mission, and thanks to the revolution has created 22 new universities in these years. -Statement during the campaign and rally in support of the Candidate of the Homeland Hugo Chávez in the state of Miranda, September 29, 2012.

Well, Lucía, this small but gigantic book emerged from an unprecedented process in Venezuela. Whoever wants to investigate a little, then investigate. There’s deputy Aristóbulo Istúriz who was First Vice President of the National Assembly, see. I don’t remember, but how many movements, how many messages, how many proposals reached the Constituent Assembly, that you collected on tours throughout the country; from all sectors. Ah, Aristóbulo, do you remember?

From the most modern to the most everyday methods, there were open videoconferences in the morning, for all corners of the country. There was the 800-Constituent hotline, with more than 800 students collecting the proposals, all the demonstrations and marches, transmission of the debates on television and radio. We went out with vehicles picking up the proposals with barrels on the corners, the constituents in all the public squares on weekends. The country had never experienced such a process before, but nevertheless, in the end it was not the Constitution, it was a project that was submitted for discussion to submit to a referendum. -Press conference with Commander President Hugo Chávez and national and international media, October 9, 2012.

Featured image: Aristobulo Isturiz one of the historic leaders of the Bolivarian Revolution and Chavismo, passed away this Tuesday, April 27. File photo.