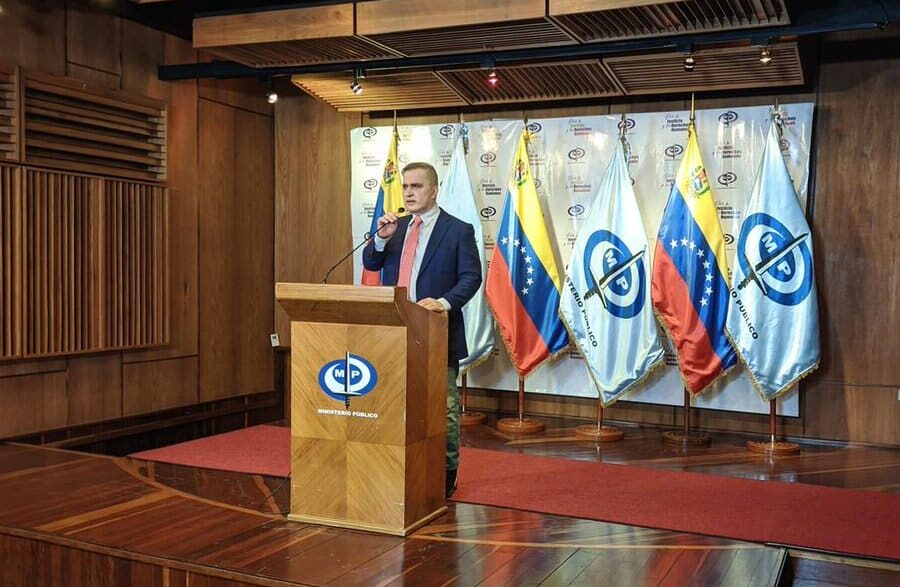 The attorney general of Venezuela, Tarek William Saab, reported on the arrest of former PDVSA Vice President of Finance Víctor Aular for the embezzlement of $4.85 billion through a 2012 loan agreement. Saab reported that Aular has implicated former minister and PDVSA CEO Rafael Ramírez in the multi-billion dollar embezzlement scheme, alongside other PDVSA executives.

Saab stated that, in view of the information and evidence received from Oil Minister Tareck El Aissami indicating that Ramírez diverted billions of US dollars through a fictitious credit line using Administradora Atlantic 17107, C.A. as a front, two national prosecutors have been appointed to open the investigation.

In addition, Saab noted that nine search warrants, authorized by the 4th Court of Control, were requested for various real estate holdings linked to those investigated.

Saab said that measures were requested to prohibit the blocking and immobilization of accounts and other financial instruments, and the seizure of assets.

Arrested and confessing
The attorney general explained that on the same day, Víctor Aular, PDVSA’s vice president of finance (CFO) at the time of the events in question, was arrested and brought before the 4th Court of Control with jurisdiction over crimes associated with terrorism for the alleged commission of the crimes of fraudulent use of public funds, embezzlement, money laundering, and association to commit a crime.

Saab stated that during several interrogations, the former official said that Ramírez, in the company of Nervis Villalobos, summoned him to his office in March 2012 and instructed him to sign the financing agreement.

Saab stressed that Aular explained that this operation, although it could be justified in financial and accounting terms, was illegal, since PDVSA had to request the bolívars it needed from the Central Bank of Venezuela.

Saab indicated that the former official revealed that Administradora Atlantic 17107, C.A. belonged to relatives of Ramírez, demonstrating that he was the intellectual and material author of this operation to swindle the Venezuelan state company and the Venezuelan people.

According to Saab, Aular explained that he spent a period of nine months in the United States, in which he met several times with former Minister Ramírez, when Ramírez was serving as ambassador to the United Nations. On one of these occasions, Ramírez asked him for help to collect material to protect him from corruption cases investigated by the Public Ministry.

“In his statements, Aular acknowledges and assumes that he was responsible for this embezzlement that was made in violation of current legislation and that he authorized with his signature,” Saab said.

The head of the criminal action added that the former CFO prepared several folders on corruption cases that were being prosecuted at the beginning of Saab’s term for Ramírez.

Saab said that if the disbursement of the embezzlement had been made in bolívars, it would also be an illegal and harmful action for the country’s assets, since the oil company could not carry it out, and had to deliver the dollars to the BCV and receive bolívars in exchange.

Additionally, Aular stated that in the city of New York, he held a meeting with Nerbys Villalobos and with former mayor and fugitive Jonathan Marín.

Aular related how, once he returned to Venezuela, he met again with Jonathan Marín and Patricia Mundaraín, who required his technical support to set up a financial structure for a company named Amunza S.A.

The attorney general specified that Jonathan Marín told Aular that this company was his property, but due to his status as a public official it was not in his name but in the name of Patricia Mundaraín who, Saab clarified, is also the subject of an arrest warrant.

“The purpose of this structure was to be able to bid and obtain contracts on oil wells in the Republic of Ecuador, where they had several operating oil drilling rigs,” revealed Saab.

He pointed out that the investigations into these events are now underway, and that only a few hours have passed since the complaint was received.

Saab highlighted that, to date, 25 corruption schemes have been revealed in the oil industry, in which 186 former officials have been prosecuted, and 63 people have been convicted of corruption.

Investigations against Ramírez
The attorney general stated that Ramírez is being investigated by the Public Ministry in at least nine corruption schemes, among which the case of the Petro Saudí Saturn ship stands out, a junk ship for which a billion-dollar contract was paid for the exploitation of offshore gas, even though most of the time it was idle.

Likewise, a case of embezzlement of PDVSA funds with the approval of contracts for goods and services for more than $566 million between 2010 and 2015, involving the former president of the company, Eulogio Del Pino, is also being investigated.

In addition, Saab cited another investigation for alleged irregularities in the PDVSA Retirees Pension Fund, which was opened in August 2018 due to complaints from retirees and pensioners from Monagas state.

“Added to this plot is the case of the Spanish company INGELEC, whose purpose is to manufacture power generators,” added the attorney general, “and would have paid €2.7 million in commissions to the criminal network led by Rafael Ramírez and his cousin Diego Salazar.”

He also mentioned the case of the Vienna-based Office of Marketing Intelligence and Petroleum Policy, which manipulated two components used to calculate the price of Venezuelan crude oil, “the K Factor and the AGA scalers,” said Saab, “which could generate losses of $5 billion to the Venezuelan state from 2009 to September 2017.”

Finally, Saab noted that the institution he leads is only beginning this investigation, so new arrests have not been ruled out, nor the possible appearance of new names linked to this plot.