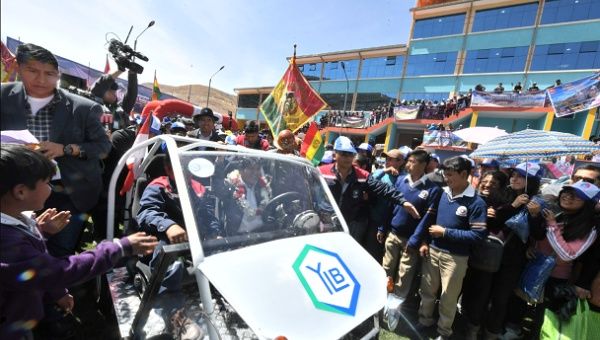 Bolivia has the largest known lithium reserves in the world, which is expected to play a key role in future industries, such as electric cars.

President Evo Morales officially presented on Tuesday the first electric car to be manufactured in Bolivia, produced by state owned company YLB. Morales presented the vehicle at the official opening of a new lithium technology center in Potosi.

The technology center will teach students different courses related to lithium and its use. The government hopes that they will provide the workforce for Bolivia’s new lithium industry.

Bolivia has the largest known lithium reserves in the world, which is expected to play a key role in future industries, such as electric cars.. The government has already built a state-owned factory that is processing lithium to produce batteries for electric cars among other products. It was at this same factory located in La Palca, where Bolivia’s first electric car was manufactured.

Morales posted to Twitter about the event, stating that “With a heart full of joy and pride, we premiered the first vehicle assembled with Bolivian lithium in Potosí that will use energy from the lithium batteries of La Palca, in the same department. We combine investment with education to advance in Industrialization for a #SecureFuture”

The lithium factory is based in a rural area in the department of Potosi, meanwhile the lithium technological centre is located in Distrito 17, a working class neighbourhood in the city.

The centre will have 18 classrooms, practical theoretical laboratories and conference rooms.

At the opening of the center, Morales said, “We proposed and have agreed that it is important that the Technological Center for Lithium is installed in the city of Potosí, it will be the only one for Bolivia, we hope that academics and experts can join to improve and train medium and high level technicians in lithium”

Bolivia’s ‘Bicentennial Agenda’ drawn up by Bolivia’s leftist government aims to industrialize the country’s natural resources, so that Bolivia will no longer depend on the export of cheap raw materials, but will be able to process them and produce value added products within Bolivia itself.

Progress on this has been made in the area of natural gas. Since nationalizing the country’s gas in 2006, the country now exports processed gas canisters, rather than the raw resource, Morales has commented on this previously saying, “We no longer import LPG (liquid petroleum gas). I want you to know that when we entered office in 2005, (Bolivia) only exported natural gas and imported LPG….Now we are exporting LPG to Argentina, Brazil, … Paraguay and now to Peru”.

The government says that the investment being put into industrialization efforts comes from revenue of the state companies, especially Bolivia’s natural gas and oil company YPFB.