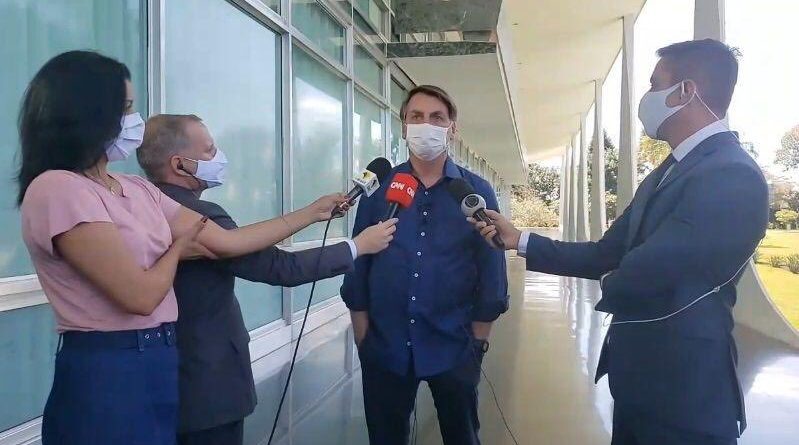 Brazilian President Jair Bolsonaro, 65, a skeptic of the pandemic, reported Tuesday that he tested positive for the coronavirus, but he is “perfectly fine.”

“I’m fine, I’m normal, compared to yesterday [Monday], I’m fine. I’m even wanting to walk, but on a medical recommendation I won’t,” Bolsonaro said, wearing his mask, during an interview with the press at his official residence.

The president explained that the symptoms began on Sunday with discomfort and tiredness and worsened on Monday, when he had a 38º fever. This Tuesday its temperature dropped to 36º.

The president is being treated with hydroxychloroquine, a drug of which he is a faithful advocate, even though its effectiveness in fighting the virus has not been proven and has been dis-encouraged by the World Health Organization (WHO).

Bolsonaro took off his mask while announcing in a press conference that he tested positive for #COVID19 https://t.co/j7QSBMZ5sS

“Life goes on and the elderly need to be taken cared of, but there is no need to panic,” said Bolsonaro, who will work by videoconference in the coming days.

A few minutes before the end of the interview, he left the journalists and took off his mask. “So you can see my face, I’m fine,” he said again while some journalists reacted in fear. In the same way that he has commented throughout the pandemic, he stressed that the side effects to fight the virus cannot be worse than the disease itself. Do we have to worry about the virus? Yes. But also with the issue of unemployment, which is there,” he said.

Last weekend, Bolsonaro and several of his ministers had lunch with the US ambassador to Brazil, Todd Chapman, celebrating the US Independence Day. Everyone posed without a mask and without respecting social distance.

“I do not work miracles”
During recent months, the Brazilian president has not complied with health recommendations and has attended numerous public events without a mask, without respecting social distancing and causing crowds among the population. He has also opposed the closure of shops and quarantines.

With 1,623,284 infected and 65,487 deaths in the country, the president has relaxed the law on the use of face masks in public places as a preventive measure to avoid infections.

The fact that Bolsonaro never wears a mask in Brasilia, mandatory since April 30, led a federal judge to force him to use it in public spaces, but another magistrate annulled the ruling days later, considering it “unnecessary.”

Since the pandemic began, the President has left a good collection of phrases in which he has underestimated the situation. “What do you want me to do? I am a Messiah, but I do not perform miracles. Life is like that,” he said when asked about the deaths from the virus, and referring to his middle name, Messiah.

“Tomorrow it will be me. Logically, one wants to have a dignified death and leave a good story, ” he also said.

On another occasion, he assured that if he became infected, he had nothing to worry about thanks to his past as an athlete. “It would have no symptoms: at most a flu, a small cold,” he said.

Featured image: President Jair Bolsonaro informing from the presidential residence that he was positive on a Covid-19 test on July 7th, 2020.