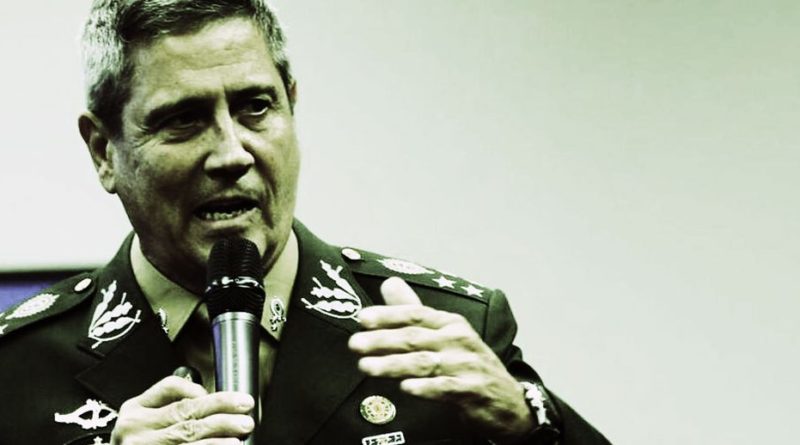 Chief of Staff General Braga Netto’s launch of a massive public investment programme, dubbed his “Marshall Plan” is the strongest indication yet that President Bolsonaro and Finance Minister Guedes have lost control of Governmental policy to the Military.

In early April 2020, the first rumours emerged that Brazil’s Chief of Staff, General Walter Souza Braga Netto, had been quietly anointed “acting” or “operational” President of Brazil. It was a position which did not officially exist, therefore no official confirmation of this was even possible. The reports, from multiple sources, claimed that the incumbent President, Jair Bolsonaro, would not be removed from power as many had excitedly hoped, but be kept in position as a public figurehead, with important decisions taken out of his hands, thus maintaining the democratic packaging for military government in all but name.

Appointed as Chief of Staff in February, General Braga Netto was the first Military figure to occupy the position since the 1964-85 dictatorship and his expanded powers came about apparently without resistance. The rumoured “silent coup” passed without fanfare, without announcement, and was given little media coverage outside independent media. Adding to mystery and speculation, Italy’s La Repubblica published a report on the rumours which then vanished from its website.

At a press conference on April 22, without the presence of Finance Minister Guedes or any of his team, Braga Netto announced a complete economic U-Turn: “Pró-Brasil” – a government programme of massive investment in infrastructure. Pró-Brasil envisages a total investment of R$300 billion, with R$250 billion in concessions and public-private partnerships, and another R$50 billion in public investment. General Braga Netto will coordinate the programme and insists all Governmental ministries are in unanimous support.

The plan contradicts the ultraliberal ideology of Chicago Boy Guedes, his Instituto Millenium, and their economic platform which was used by many in business as justification for backing Bolsonaro in 2018. It resembles the PAC launched by President Lula in response to the economic crisis of 2008/9 which saw Brazil become the last major economy to enter recession and the first to exit. Guedes has reportedly complained that it is a return to the subsequent economic policy of Dilma Rousseff’s Presidency, the so called Growth Acceleration Programme. Perversely, Rousseff’s policy, which this new programme goes some way to replicate, was once used as a justification for her removal by any means.

The Guedes team still insist this  can only be paid for with the accelerated privatisations which made him and Bolsonaro the darlings of Wall Street.

Following Braga Netto’s announcement at Planalto Palace, Brazil’s traditional media shifted gear immediately. Estadão led with their report on the Pró-Brasil programme, with its headline pointing to the absence of Guedes’ economic team at its announcement. Then, overnight on 23 April, Folha de São Paulo published this article, describing Braga Netto’s emergence, in the midst of the pandemic, as “the main political articulator of the Government”. The article reiterated many details of Braga Netto’s expansion of powers as reported in independent media two weeks prior, but unsurprisingly stopped short of repeating the controversial definition of the General as “operational president”.

Braga Netto joined the the Army in 1974, and ascended to the rank of four-star General, along the way serving as a UN observer in East Timor, and also as a Military attaché in Poland and in the United States.

The Armed Forces has cemented its place at the heart of Brazilian Governance since 2016, and now occupies more ministries than it did at the end of the Military Dictatorship, and were widely seen as already calling the shots. Thus when the rumours about Braga Netto’s power broke, some argued that the General becoming key political decision maker in a Bolsonaro-fronted Government was not news.

Then, the firing of Health Minister Mandetta – only after Braga Netto had been credited with saving him from dismissal – was misinterpreted as evidence that Bolsonaro was still in charge. On the contrary, his successor was identified and agreed by Braga Netto and the Generals when they washed their hands of Mandetta. So, whilst the elected President blustered with meaningless public statements and desperate-looking attempts to rally his base – including calls for closure of the Supreme Court and Congress – it was becoming clearer by the day that Braga Netto was indeed now a powerful frontman for the Military core at the heart of Brazil’s Government, and effectively coordinating the ministries. Even former Army Captain Bolsonaro himself is said to trust Braga Netto in this position.

As it was in 2016, once the Pandora’s box was opened by the coup against Rousseff, and the Military re-entered Government, it was unlikely they would ever relinquish power voluntarily. This was demonstrated very clearly by their manipulation of 2018’s Presidential election, and, as they did in the 1960s, Brazil’s democratic forces made a crucial error in judgement that the Military would simply stand aside.

Whilst many will instinctively celebrate any diminishing of Bolsonaro’s power, and await the eventual exorcism of his pathological influence from Government altogether, the future of Brazilian democracy is ever more precarious.