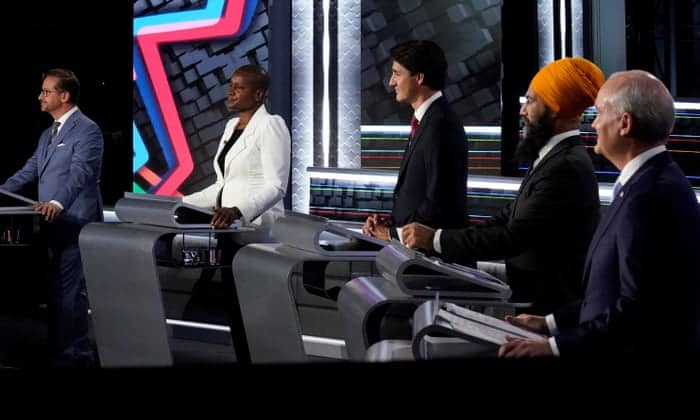 The CBC News reports that “Main party leaders will meet for the first and only English debate Thursday [September 9]“. The announcement raises two major problems. One is which parties will participate in the debate. The other is the appalling exclusion of any discussion on Canadian foreign policy.

The invited leaders represent the dominant parties in Canada:

“The participants were determined by the The Leaders’ Debates Commission, a non-partisan and independent organisation responsible for organising federal leaders’ debates.” They appear to represent the Canadian establishment rather than the Canadian people.

Those are only five of the 22 registered political parties in Canada. Surely others deserve to be heard based on the political relevance rather than their membership. Obviously, we know already that the biggest loser in the September 20 election (#elxn44 ) will be Democracy.

The smallest parties who likely would have a different voice to contribute to the debate, a different vision for Canada, will not be heard. Among those of course are socialist parties. For instance the Communist Party of Canada, founded over 100 years ago, has 26 candidates running across nine provinces. The party socialist platform calls “For a People’s Recovery from Capitalist Crisis.”

Parties may be small individually but all together would have a large mass of Canadians who do not feel represented by the centre-right-extreme right dominant parties. In other words a large number of Canadians do not have a real choice to elect the next government of Canada because that choice was never fairly presented to them.

Are we surprised at the large voters’ abstention on election day? Apathy towards ineffective Canadian politicians incapable of presenting real change is a major factor. It is well-known that mainstream parties do not offer real change. They only offer misleading rhetoric during the campaign and neoliberal policies when elected responding to corporate interests.

However, the second major caveat about the announced debate is that foreign policy will not be open for discussion. In other words, Canadians will not be able to hear directly from the five chosen candidates where Canada stands on the international stage, its role and commitments that in turn impact domestic policy. Even though some information is available in the parties’ platforms to those who have the determination to find out, the majority of Canadians will not have the opportunity to hear it debated on live TV. Even the CBC opines that “Leaders’ debates usually don’t move the needle much — but this election could buck that trend.” But certainly not based on one of the most crucial aspects of Canadian governance.

Analysts who do follow Canadian foreign policy have the right inkling that the reason for the exclusion is that the five parties do not have any real disagreement on the matter and therefore lack debatable issues to present. It is a tacit acceptance that no matter which party will form government, Canadian foreign policy will continue its appalling performance guided by geopolitical forces outside Canada. This is an insult to Canadians.

In a personal e-mail exchange with political analysts Maria Paez Victor and Arnold August we listed some of the issues, among others, that were deemed non debatable:

• The  shame of the Lima Group and its utter failure.
• The aggression towards Venezuela: supporting illegal sanctions and the illegitimate recognition of former parliamentarian Juan Guaidó, instead of supporting open talks with the legitimate Maduro government.
• Canada’s role in the Afghanistan war, its defeat along with the US and the shameful chaotic exit.
• The rapaciousness of Canadian mining corporations that violate human rights and destroy the environment in other countries.
• The Canadian shocking intervention in Haiti.
• Canada consistent supporting  the “colour revolution” in Cuba, while not saying a word against the  Trump-Biden sanctions.
• The lack of COVID-19 vaccine support to poorer countries.
• Canada’s new Cold War against China: the arrest of Meng Wanzhou who should be released unconditionally.
• The arrest of the “Michaels” in China and the recent revelation that they are Canadian spies.
• Canada’s questionable unconditional alliance with the entity of “Israel” contributing to the killing of Palestinians, Apartheid, illegal recruiting of Canadians into the “Israeli” army.
• Canada’s manufacturing weapons and selling them to countries that wage war and violate human rights like Saudi Arabia.
• Why is not Canada out of NATO and stop its participation in wars? Build global peace and cooperation instead.
• What ever happened to Canadian sovereignty? Will our foreign policy ever stop being the handmaiden of the USA with all its horrendous foreign policy mistakes and atrocities?

These are fundamental issues that Canadians need to know about before they can decide who best represents them. Democracy is first and foremost informed choice in all political realm.

What makes the absence of this discussion from the debate more suspicious is that these are topics typically brought up by more progressive groups leaning towards socialism.

The five party leaders will surely debate on domestic issues while implicitly extolling the virtues of capitalism. They will ignore what is well known by socialists: capitalism and imperialism go together. In order to sustain a society rooted in capitalism, a government will have to rely on the pillage of resources wherever they are, the plunder of critical materials to guarantee the selfish supply, the exploitation of low paid workers in poor countries, and the alliance with like-minded governments to pursue similar coordinated political siege and submission of sovereign nations including by military means. That is in a nutshell what imperialism implies. But Canadians are prevented from being exposed to the remote possibility that the imperial role of Canada may transpire in a debate dealing with foreign policy.

Indeed Canadians who want to learn more about Canada’s imperial role in foreign policy and how to fight it back will have to access other sources. Fortunately there are many. Among others, Canadians can read publications by the online media such as The Canadian Foreign Policy Institute, which informs people living in Canada about the country’s diplomatic, aid, intelligence, trade and military policies abroad; as well as The Canada Files with analyses of domestic and foreign policy news.

For a broader perspective, just recently an important document was released by an ad hoc International Manifesto Group with dozens of signatories titled “Through Pluripolarity to Socialism: A Manifesto”. The document is a call to the need of a multi-centered world but it is also a warning of a new cold war arising from the hegemon United States. It states, “Like the old one, this Cold War is also a general imperialist offensive against peoples’ autonomous development, from Palestine to Peru and from Vietnam to Venezuela. The variety of means through which they wage it is backed by the world’s most fearsome arsenal, including nuclear, chemical, biological and cybernetic weapons of mass destruction. Never has so much destructive power been concentrated in so few irresponsible and desperate hands to wield against so great a majority of the world’s people and peoples with an objective interest in socialism.”

In a real democracy all parties, indeed all Canadians deserve to be heard and information shared in order to participate with full information in the decision making of our country. Only then voting makes sense.