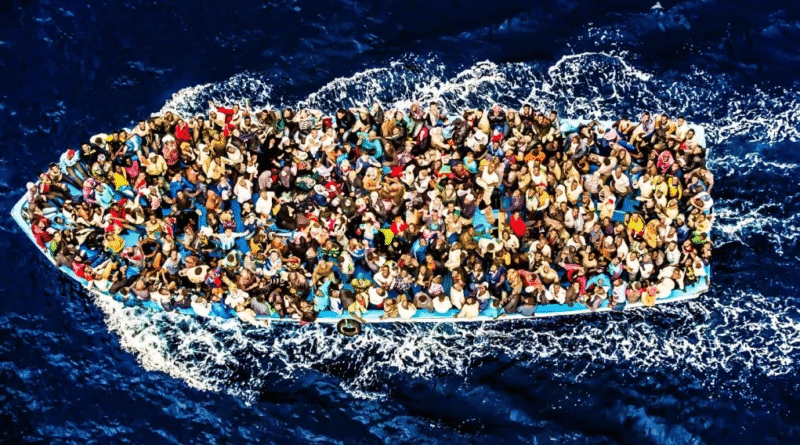 Turning on the news at any given time in the United States, one is instantly bombarded with a plethora of truth, half truth, and outright lies and distortion. A considerable amount of time is allocated to today or yesterday’s impending disaster or impending road to prosperity. This time can be used to cover things in the United States or elsewhere, and depending on the ‘elsewheres’ views of the US government, this coverage can be positive or negative. One of the topics which is explored to the point of nausea is the topic of migration, “illegal” or legal, the causes behind it, what to do about it, what it means for people’s jobs, credit scores, or the availability of avocados on the shelves, and so much more. When pundits devote time to the question of “why” does migration exist, what would make people pick up and move hundreds or thousands of miles away from anything familiar, the conclusion the pundits arrive too far too often is one made up of approximately 100% hot air. Many times they come to the conclusion that “The United States (or the less often cited examples of other Western countries) is such a beacon of happiness and love and economic prosperity that anyone would be willing to kill their first born just for a shot at living in the land of opportunity”. This conclusion is usually coupled with the assertion that “These other countries (it changes every now and then) are so bad, crime ridden, drug infested, unemployment riddled, and full of corruption for no discernible reason, that it is no wonder people risk their lives to leave”. This assertion is equally as ludicrous and it is not hard to figure out why these two arguments normally go together. Modern migrations have been closely tied to the emergence and growth of capitalism to become the dominant economic system in the world (in both its private and state forms). Mass movements of people within regions, nations and internationally have been because of capitalism’s uneven development and the exportation of externalities to the so called ¨third world¨ as well as the proliferation of imperialism. These migrations are often caused not by personal preferences, but instead in search of better living standards or even basic tenants of survival.

One of the most glaring examples of capitalist development leading to mass migration is the case of NAFTA, specifically speaking of Mexico and the United States. The signing of this free trade agreement, which is inherently capitalist in nature as it had no regard for human or social factors, and instead was implemented on purely monetary lines, is noted for its effects on wages and migration between the United States and Mexico. On the 10-year anniversary of NAFTA, the Washington Post reported: “19 million more Mexicans are living in poverty than 20 years ago, according to the Mexican government and international organizations.”. Much of Mexico’s agricultural sector was dedicated to the production of corn, which was used primarily to meet domestic demand as opposed to for export. One of the stipulations of NAFTA was the elimination of tariffs and other protective measures which sought to protect domestic production and consumption to ensure the safety of the Mexican farming sector. NAFTA at the same time did not touch the subsidies that US farmers receive from their federal government. In classically capitalistic terms and language, the supply of corn in Mexico exploded because of the influx of cheaper US corn, and thus with demand remaining the same, the price of Mexican corn collapsed in order to compete with the new US suppliers. According to Public Citizen, the price received by the Mexican farmers fell by 66%. Meanwhile prices of other essentials remained the same or increased, and thus millions of people had to abandon their farming practice. From 1991 to 2007, this translated to over 2 million agricultural workers abandoning the practice, again according to Public Citizen. Unsurprisingly, this explosion of unemployment also led to a huge rise in migration from Mexico to the United States. During NAFTA’s first six years, the number of annual immigrants from Mexico had more than doubled, coinciding with a flood of U.S. subsidized corn into Mexico, with the number of those without documentation rising from about 2.9 million in 1995 to a peak of 6.9 million in 2007.

Another region we hear a lot about in terms of migration is the middle east, with an emphasis on Syria. It is worth noting that the large influx of asylum seekers and refugees was not the norm before Western intervention in the early to mid 2010’s. According to the United Nations High Commissioner for Human Rights, more than 7.6 million people have been internally displaced by the Syrian “civil war” with an additional 5 million refugees registered. This is not a “civil war”, as almost every major Western country has intervened in one way or another, often finding themselves on the same side as forces like the Al-Nusra front and Al-Qaeda. Vladimir Lenin famously named imperialism as the “highest stage of capitalism”. In capitalism, the profit motive reigns supreme in all aspects of life. It is thus no wonder how weapons manufacturers, energy companies, and banks have profited off of the Western intervention in Syria. This is yet another example of capitalism causing mass migrations of people outside of any sort of free will or democratic decision making. Hillary Clinton once said that people needed to start looking at Iraq, another country demolished by imperialism, as a “business venture”. There is no doubt that the same logic is being applied to Syria.

The last example I want to highlight is the case of the Bolivarian Revolution in Venezuela. Since the death of leader Hugo Chavez in 2013, the United States and again, much of the Western world has exerted extra pressure on the country and its people. The imposition of sanctions, economic war, financial blockade, attacks on infrastructure, and so much more are felt daily throughout Venezuela. In the hegemonic Western media, it is repeated over and over again with no sources usually mentioned that “X number of Venezuelans have fled the Socialist dictatorship of Nicolas Maduro”. A few clarifications are in order. First, the policies of Nicolas Maduro are in the same tradition of Hugo Chavez, Bolivarianism, Socialism, and Independence. These policies have defined Venezuela for 20 years, why is this “HUGE EXODUS” only coming to light now? Could it be that the precarious situation created by imperialism and capitalism has somehow encouraged this migration? According to the hegemonic media, apparently not. Second, I have no doubt that some people have left Venezuela, as is the case in literally every single country in the world every single year. How often does the media talk about the fact that almost 6 million Colombians live in Venezuela, fleeing civil war and narco-dictatorship propped up by the United States? According to Mision Verdad, when considering the total number of people to have immigrated and emigrated, the number is actually positive, in other words, more people are moving to Venezuela than leaving. Considering the crippling situation that the US, Europe, and the Lima Cartel has placed Venezuela in, it is nothing short of a popular and socialist miracle that the country is still continuing its march. The country has built over 3 million high quality homes for the working class, the CLAP program continues to reach over 6 million families, unemployment remains low, inflation is starting to show signs of ebbing, and so much more. All while the largest and most powerful country in the world is trying to starve the Venezuelan state of much needed revenues, access to international credit, and much more. Of course there are structural problems mainly related to the oil rentier system that are being addressed by the revolutionary government, but any uptick in migration is no doubt caused by the adverse circumstances forced upon Venezuela by predatory capitalism.

Capitalism, and all of its subsidiaries, are the biggest motivating factor in mass migrations. Whether it is unending cyclical crises that push millions out of the job and into the roads to head for new lands, imperialist wars that displaces millions through the use of bombs and weapons, or trade deals that leads to further plunder of all the world’s working people just so a few oligarchs in the global North and South alike can continue to gorge themselves, the problem is capitalism. Any sort of just or fair migration policy must start with the radical question of “what drives migration?”. The answer will inevitably lead back to predatory capitalism, neoliberalism, or some other bastard child of either or. The solution to this problem is already being exercised in multiple countries, such as Venezuela; Socialism! The rest of the world will soon follow.