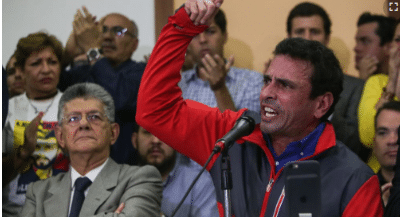 The former anti-Chavista Miranda state governor and former presidential candidate Henrique Capriles Radonski published this Sunday, August 23, at night, a statement in which he talks about the issue of “unity” in the opposition, his differences with the extremist and seditious sector that calls for abstention and why he believes voting is the natural option for change in politics.

In the statement published on his Twitter account, Capriles highlights that the “unity” in the opposition, currently shattered, “is not an end, but only a means to achieve changes.”

“Unity is not an issue that is agreed between politicians only, but must be worked together with all Venezuelans,” says Capriles, arguing that calls for unity can be empty when Venezuelans are not taken into account.

Unity, he says, is not “just about meeting national leaders in the same room and saying this or that, unity has already been conquered (…) we must listen to the people instead of hearing each other, repeating one and the other. Always with the same ideas.

In that sense, he referred to the coercive measures – miscalled sanctions – imposed on Venezuelans through the total and unilateral blockade executed by the United States, the European Union and their complicit governments in Latin America, which have destroyed the quality of life of Venezuelans by preventing them from having access to basic goods and services for life such as medicines, food, fuel, electricity, domestic gas, water, among others.

“It is unacceptable to have to choose a route that means more sacrifices for Venezuelan families (…) running out of gasoline does not affect Maduro or his leadership, but rather those who have to reach hospitals in ambulances without fuel, trucks to transport food and medicine, to doctors and nurses who have to reach their destination or else no one will attend to our patients,” he stressed.

RELATED CONTENT: “There is a Strong Rejection of the Opposition”: Arturo Peraza (UCAB)

In this regard, he added: “Let’s not cover the sun with a finger, people with money and those who can get dollars in the end always have a solution, but they are not the vast majority. The people have always ended up being the most affected by the dynamics of ‘trial and error’ of those who have their own benefit as a priority and not that of the country (…) Venezuelans cry out for a unity that is capable of addressing their real problems.

On the parliamentary elections

Capriles also made reference to the parliamentary elections of December 6.

“There is a great challenge and a reality that cannot be ignored (…) On January 5, 2021, the National Assembly, elected by the vote of our people, ends its constitutional period and it is in this context that the country hopes that the leadership have a real discussion about the event called for next December 6,” he said.

He added that this electoral process is important, which is why the opposition should not be absent and make the same mistakes as years ago when they abandoned the democratic path and left their supporters without the option of voting.

“It is about that, as the Venezuelan Episcopal Conference pointed out, a route is discussed that is not only the one of abstention and resignation (…) are we going to keep tripping with the same stone again? (…) An electoral event can become a mobilizing event that allows the country to rediscover the path of politics,” he said.

The opposition leader also pointed out that if the conjunctural situation caused by the COVID-19 pandemic were to worsen, it would be best to postpone the electoral event “until the first quarter of 2021 or on a date that does not expose the people.” However, he adds that “if the situation were the opposite, of a pandemic in control, on the road to December 6, they would fight for minimum conditions that allow Venezuelans to express themselves. It is a false dilemma to vote or not, the real dilemma is to fight or not.”

“There is nothing more powerful than telling the truth. As national political leaders, we have to put our feet on the ground and not continue to feed fantasies that only generate more frustration and mistrust among Venezuelans,” added Capriles, about the calls of extremist sectors that insist that they are supposedly administrators of a parallel government that in real terms does not exist; and that also makes continuous calls to support virtual realities or consultations that are not within the constitutional order.

“It is a serious mistake to try to design and convene a ‘virtual’ consultation with the intention of legitimizing and maintaining the status quo. Our actions must be to unify forces and become a real alternative to the power that Maduro controls today, because I insist: power is in Maduro’s hands (…) We are not the government nor are we in the government: We are in the opposition and we want a change,” he added.

Capriles emphasizes that he believes “in the freedom that each person has to decide what seems best to him, a reason that allows me to opt for realism: keeping our feet firmly on the ground and taking care of what is truly important to get out of this inertia in which we are.”