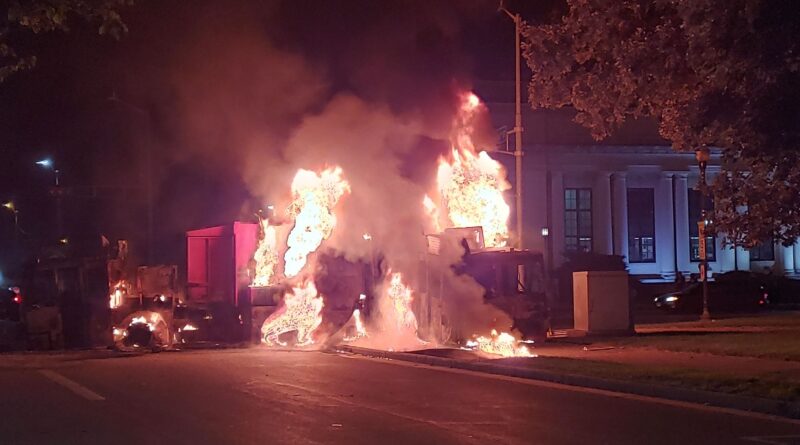 Hundreds of people gathered August 23 at the police station in Kenosha, Wisconsin, to protest the shooting that day of Jacob Blake, 29. Blake was shot in the back by Kenosha Police as he walked away from them.

According to sources on the ground, Blake had intervened in a dispute between two people, effectively breaking up the fight. After arriving on the scene, police attempted to detain Blake who walked away, refusing to talk to the police or give a statement about the incident. As Blake walked toward his car, police drew their firearms, grabbed him from behind by the shirt and shot seven rounds into his back.

Blake is in critical condition at a Milwaukee area hospital according to Kenosha News. Any further details about his condition are unknown at this time.

Police in riot gear forced protesters back from the front doors of the police station, donning gas masks and preparing to fire rubber bullets at unarmed, peaceful protesters. After being pushed back by riot cops about 50 yards from the building, protesters linked arms to form a human wall.

The violent reaction by police to civil protest was immediate. Police deployed teargas around 10:45 p.m. in a failed attempt to disperse the crowd, which held fast and began a unified effort to push the cops back toward the building. Significantly larger amounts of gas were deployed at 11:06 p.m. forcing the crowd back momentarily. People monitoring police scanners heard that city buses were being deployed in order to conduct mass arrests of protesters.

Members of the Party for Socialism and Liberation were on the front lines and joined in chants of “Black Lives Matter” and “How many more?” A city dump truck, used to block off the road to the police station, was set ablaze while police shot rubber bullets at people recording the protest.