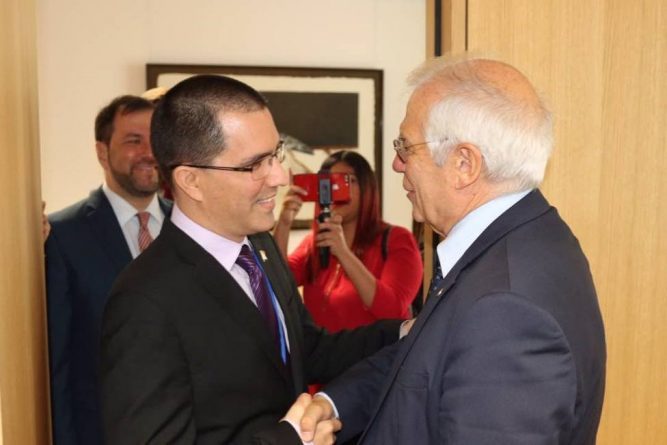 “In Madrid we met with the Foreign Minister of the Spanish Government, Josep Borrell. We reviewed our bilateral relationship and we shared the interest to advance along the route of dialogue as the only way to guarantee the prosperity of Venezuela,” Arreaza said through a message posted on his Twitter account.

“The acting Minister of Foreign Affairs, European Union and Cooperation, Josep Borrell, met Wednesday in Madrid with his Venezuelan counterpart, Jorge Arreaza, to whom he has offerred the “firm support” of Spain for the Oslo process as “the best alternative” to solve the political crisis in the Caribbean nation,” reported the Spanish outlet COPE.

RELATED CONTENT: See What This Belgian Outlet Said About its Partiality on Venezuela (RTBF)

Arreaza traveled to Spain after an official visit to Rome, where he participated in the High Level Segment of the 41st Conference of the United Nations Organization for Food and Agriculture (FAO).