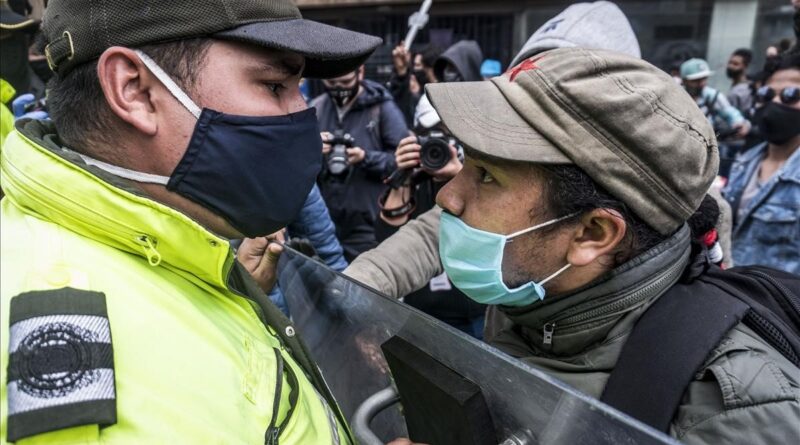 In Colombia during the last 11 days, 33 deaths have been reported at the hands of groups financed by drug trafficking, after the relief brought by the 2016 peace agreements with FARC, also a target of violence. Between Friday and Saturday, the authorities registered 17 deaths and two disappearances in two massacres that occurred in a country supposedly semi-paralyzed by the pandemic.

Five of the victims fell in Arauca, on the border with Venezuela, and six in the department of Cauca, both heavily militarized areas. This Saturday Jhon Rojas, governor of Nariño, a neighboring department of Cauca and bordering Ecuador, also reported a “new massacre” with six victims and two disappeared in the municipality of Tumaco, where there are a large number of coca plantations.

The episodes are linked in more or less the same way: an armed group breaks in and opens fire in remote areas or takes their victims and then leaves the bodies. Most of those killed are young. On Friday, in the El Tambo massacre (Cauca), they killed six men. The attackers photographed them “when they took them away to show them before massacring them,” said the chairman of the Senate peace commission, Roy Barreras.

The senator shared the images on Twitter. “They act with cruelty and cruelty that, beyond the crime, sends a message of control of the territory,” he wrote. On his side, President Iván Duque regretted that these “painful events” have not “disappeared.”

The most recent wave of violence began on August 11 with the massacre of five minors in a sugarcane growing area in Cali; it continued with that of eight young people who were chatting at a party in Samaniego, Nariño, and the murder of three Awá indigenous people in that same department.

Added to this onslaught for control of strategic areas of drug production and trafficking are the murders of 224 former guerrillas who signed the peace agreement, according to the now left-wing party Fuerza Alternativa Revolucionaria del Común (FARC), as well as hundreds of leaders or human rights activists.

Although the 2016 agreement significantly reduced violence –analysts estimate that around 3,000 deaths have been avoided per year –, the rebound in drug trafficking and the lack of effective control of the vast territory by the State have contributed to the return to times of terror and lead.

“What has happened in a week is horrifying. There were four massacres,” Camilo González, president of the Institute for Development and Peace Studies (Indepaz), told AFP. The drug trafficking mafias “are taking advantage of the situation of the pandemic and the weakness of the state presence (regarding) protection and social policies in those territories,” he said.

As of August 17, the United Nations had documented 33 massacres so far this year. You can call it “massacre: when three or more people are killed in the same incident. This Saturday Defense Minister, Carlos Holmes Trujillo, announced the creation of a special unit to capture those responsible for the killings.

The aggressors “will be part of the cartel of the most wanted for being perpetrators of collective homicides,” as well as a “reward program,” he declared from Arauca.

Pressured by criticism of the deterioration in security, the government insisted on its plan to resume aerial spraying against drug crops, despite protests from peasants who allege a lack of alternatives. Nariño and Cauca, two of the departments affected by the massacres, connect with the main route for the exit of drugs through the Pacific Ocean.

“The presence of the State is only militarized,” and even so the violence does not stop, commented the director of Indepaz, noting the delay or non-compliance with the commitments of the 2016 agreement that sought the “protection of communities, their incorporation into legality and rural development.”

Colombia, the world’s largest supplier of cocaine consumed in the United States and Europe, has a history of violence that in six decades leaves just over nine million victims, most of them displaced, as well as deaths and disappearances.

Featured image: Demonstration in Bogotá against the increase in violence in the country, last Friday. Photo: El Periódico.