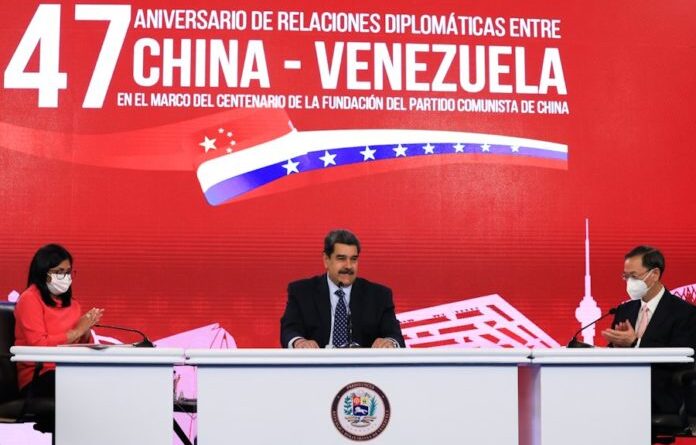 This June 28, Venezuela and the People’s Republic of China celebrated 47 years of their comprehensive bilateral strategic partnership and the centenary of the founding of the Communist Party of China. In a ceremony at the Miraflores Palace, Caracas, the ambassador of the Asian nation in Venezuelan territory, Li Baorong, assured that both countries will continue to support each other on fundamental issues. “China will not change its policy of solidarity and cooperation with Venezuela,” he said.

“It will not change the principle of supporting the Venezuelan people in the search for the path of development with their own peculiarities, nor will it change the way of rejecting any form of foreign interference in internal affairs of Venezuela,” said the top diplomat.

“The Chinese side is willing to join forces to continuously deepen the comprehensive strategic partnership and enhance mutual beneficial cooperation within the Belt and Road Initiative,” he added. He also assured that these two countries share “the same breath, the same destiny and the same heart beat.”

Victorious Centennial Party
Li Baorong also referred to the progress of the Chinese Communist Party, that reached its first 100 years of existence. From its origins as a small party with only 59 members, it has become the largest Marxist party in the world with more than 91 million members, and over 70 years governing the largest socialist country in the world, with more than 90% popular support.

#China Ambassador in #Venezuela Li Baorong retweets Maduro talking about future Chinese investments. These investments will be possible thanks to the recent constitutional Anti-Blockade Law. They will likely be a new level of participation of China in the Venezuelan economy. https://t.co/pZtDm0noTD

He then listed “the secrets of this success.” Firstly, adhere to the mandate of the people first, and pursue the happiness of the Chinese people. Secondly, insist on a path of independent innovation based on the reality of China. Thirdly, maintain self-renewal, face your own problems directly, and persist in the fight against corruption.

Li Baorong commented that to its achievements, China can now add the historic “eradication of extreme poverty, and the integral construction of a modestly affluent society promoting socialism with Chinese characteristics.”

China is our older sister
In the opinion of the Venezuelan Head of State Nicolás Maduro, China is a great power for peace and cooperation, a determining factor in the global geopolitical balance. He considered that the relationship with Venezuela “is in very good health” in times of permanent harassment and attacks. “I want to ratify all our determined support to the great China of peace,” said Maduro, in the same vein as Baorong. “Count on us as true brothers.”

Maduro warned that the Asian giant is the victim of an international conspiracy that must be denounced loudly in all international settings. “It intends to build blocks of countries and force them to go against China,” said Maduro, “a campaign in all the media goes against China. They try to justify military actions in Chinese territorial sea or threatening China. The whole world must voice its disapproval.”

World champion in solidarity
President Maduro also mentioned that China is a world champion in solidarity by providing 160 countries of the world with its own technology, tools, and medicines, during the pandemic, while exporting millions of vaccines to 80 nations. “At a time when the pandemic was peaking, planes with medicines and masks arrived from China,” he noted. “In a special way, the Chinese vaccine has been sent to all of Latin America and the Caribbean.”

Everything indicates, added Maduro, that China will be one of the few countries in the world to vaccinate its entire population in the coming months with its own vaccines, “all very effective against the different variants except the Delta, that represents a new concern for the world.”

The Head of State also stated that Venezuela is very grateful to China, because “you have friends for good and bad… In this time of suffering and anguish of the pandemic, China has shown that it is a true friend of the Bolivarian Republic of Venezuela. Thank you a thousand times.”

Finally, Maduro recalled that the architect of this strategic and supportive relationship was Commander Hugo Chávez and said “that story must be written. You have to write the real history.”