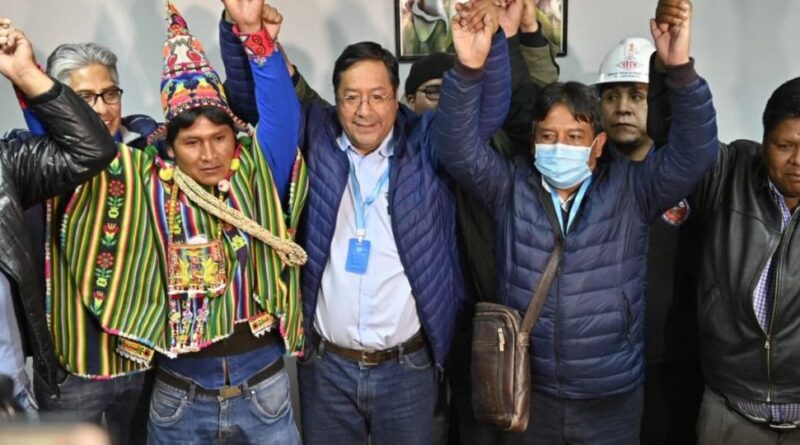 On October 23, five days after a general election was held in Bolivia, the much-awaited official results were announced by the country’s Plurinational Electoral Body. They confirmed and exceeded what exit polls had predicted on October 18: a landslide first round victory for Luis Arce, presidential candidate for the Movement Toward Socialism — Political Instrument for the Sovereignty of the Peoples (MAS-IPSP) and his vice presidential running mate David Choquehuanca. Luis Arce becomes president with 55.1 per cent of the vote, a 26-point advantage over the runner-up, Carlos Mesa (Civic Community), who received 28.3 per cent. Luis Fernando Camacho (We Believe) finished third with 14 per cent of the vote, followed by Chi Hyun Chung (Front for Victory) with 1.55 per cent, and Feliciano Mamani (National Action Party of Bolivia) with 0.51 per cent. Almost 70 per cent of ballots cast by Bolivian citizens outside of the country went to Luis Arce.

Both Mesa, a former president of Bolivia who was reportedly the preferred candidate of the U.S., and Camacho, a member of a wealthy Santa Cruz family with links to racist paramilitary gangs called “civic committees,” participated in last November’s coup d’état against President Evo Morales, as part of the chorus alleging, without any proof, that he had fraudulently engineered his own re-election.

In this year’s election MAS-IPSP retained its majority in both chambers of the Plurinational Legislative Assembly, winning 75 of 130 seats in the House of Representatives and 21 of 36 seats in the Senate. The new government is expected to be installed on November 8. Large public celebrations meanwhile began in all earnest on Saturday, October 24, after the official results were announced Friday evening.

Participation in the election was reported as 88.4 per cent of registered voters. Salvador Romero, President of the Supreme Electoral Tribunal (TSE), called the turnout historic for being the largest ever in Bolivia and one of the largest in Latin America in the 21st century — and because it took place in the middle of a pandemic. The average turnout for elections in Bolivia, where voting is mandatory, is around 80 per cent, he said.

Electoral observers were sent to Bolivia, with others operating remotely from outside the country, by the United Nations, the European Union, the Carter Center in the U.S., the Permanent Conference of Political Parties of Latin American and the Caribbean (COPPPAL) and the parliament of Mercosur (Parlasur). Others that received accreditation included a delegation of Argentinian parliamentarians, a team of journalists organized by the U.S. anti-war group Code Pink and a delegation from the Progressive International. The OAS insulted the Bolivian people by sending an observation mission headed by the same individual — a former foreign minister from Costa Rica — who headed last year’s mission that opened the door to the coup. Canada contributed funding and observers to this year’s OAS mission, as it had for the one that did the dirty work last year. Not long before election day, with Luis Arce and David Choquehuanca showing a strong lead in all polls, OAS Secretary General Luis Almagro began making noise about the possibility of “another electoral fraud” in Bolivia, indicating he was waiting for a chance to pounce again.

Almagro must be disappointed. None of the national or international election observer missions, including that of the OAS, nor representatives of parties with candidates in the election, have reported having misgivings about the election or the results. The de facto president of the coup government, Jeanine Áñez, as well as other sworn enemies of MAS, including other candidates for president, acknowledged the victory of Luis Arce and David Choquehuanca, conceding their own defeat without even waiting for the official results. The fact that the same voting trends favouring MAS emerged in this election as in last year’s, and were accentuated with even more votes this time, makes a strong case against the accusations of spokespersons for U.S. imperialism who say Evo Morales won last year’s election through “fraud.” Rather it lends weight to the opinion being expressed by many today, that the only fraud was the one the OAS instigated against the Bolivian people.

More evidence for this can be seen in the tenacious fight waged by Bolivian workers and social movements, including many women’s and Indigenous organizations, which rallied around the MAS to demand the coup government hold a new election without delay; the massive and enthusiastic participation in rallies supporting MAS’s candidates for president and vice president as the election approached; the unprecedented numbers of people who voted in this year’s election — and who they overwhelmingly voted for.

The Communist Party of Canada (Marxist-Leninist) sent a letter of congratulations to President-elect Luis Arce, Vice President-elect David Choquehuanca, the President of MAS-IPSP Evo Morales, and the Bolivian people for their resounding victory in the October 18 General Election. This victory will   provide new impetus to the people to not only defend their victory but also forge even stronger unity around their project of building a sovereign and independent Plurinational State of Bolivia in which the rights of all, not just a privileged few, are affirmed, where it is the people of Bolivia and not some hegemonic foreign power or group of powers that decide the affairs of the nation, including the direction of the economy and the country’s foreign policy so that Bolivia once again contributes to making Latin America and the Caribbean a zone of peace.

On October 18, activists participated in a picket outside the U.S. Consulate in Montreal called by the Quebec Movement for Peace to oppose foreign interference in Bolivia and support the struggle of the Bolivian people for their empowerment. The many placards and slogans expressed the protesters’ resolve:  No to All Foreign Interference in Bolivia!, Let the People of Bolivia Decide!, Canada, U.S., Hands Off Bolivia!, Full Support to the Bolivian People for Their Emancipation!, Bolivia, Yes! Yankee, No!” Throughout the action, which lasted for over two hours, drivers honked their horns and passers-by stopped to express support. Some denounced Canada’s role as a stooge for the U.S. and its interference in the internal affairs of the countries of Latin American and the Caribbean, including through the Lima Group and the Organization of American States.