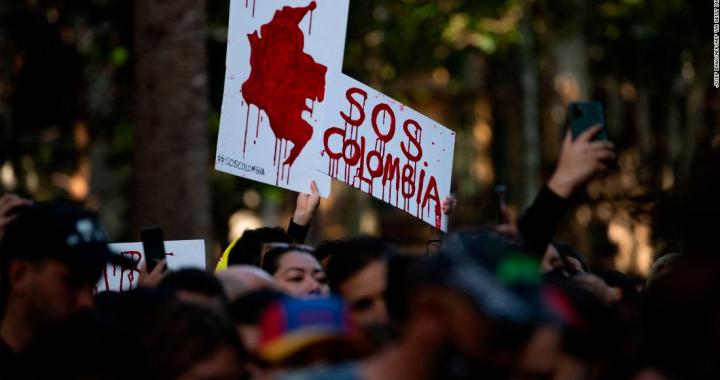 The meeting of Colombian President Iván Duque and the National Strike Committee—made up of unions and organizations that led the demonstrations ongoing since April 28—ended this Monday, May 10, without agreement. As a result a new day of demonstrations was called for on Wednesday.

“The government, on the two central issues that were raised—regarding the guarantees of the protests, and concerning the cessation of repressive actions by police, military and paramilitary forces against the people… did not say anything concrete,” stated the Secretary General of the Central Union of Workers of Colombia (CUT), Diógenes Orjuela.

This week Duque agreed to a round of meetings with various sectors to seek solutions to the political and social crisis generated by proposed neoliberal austerity measures, and the ensuing killing of protesters during the demonstrations. Millions of Colombians took to the streets to support the call for a repeal of the now defunct tax reform, while other demands included the withdrawal of a healthcare reform bill and an end to police brutality.

RELATED CONTENT: Demonstrations Around the World in Solidarity with Colombian People and Against Duque’s Repressive Regime

“We call on the Colombian population to hold another day of national strike on May 12, to demand that the government respond to these demands, withdraw Bill 010 [healthcare reform law], negotiate the emergency measures, and listen to the different social sectors,” affirmed the student representative of the committee, Jennifer Pedraza.

The leaders asked Duque to “stop the massacre and stop the violence against people who are legitimately exercising the right to protest.”

For his part, the Colombian president said that he reiterated his “willingness to design agreements and solutions for the benefit of the country and that we achieve, by consensus, quick and necessary responses for the benefit of Colombians,” without evidencing any real commitment to change, or any newfound respect for working-class Colombians.

Featured image: #SOSColombia has become a trending topic in Colombia and other countries for the last two weeks after bloody police repression authorized by Iván Duque. File photo.