April 28: First day of the strike

Colombian citizens, members of trade unions, social movements and opposition political parties are participating in a national strike in cities and towns across the country today, on April 28. The protest actions have been called in rejection of the Sustainable Solidarity bill, a new tax reform bill presented to the Congress by the far-right government of president Iván Duque to finance the economic crisis or compensate for the fiscal deficit incurred due to the COVID-19 pandemic.

The marches, demanding the withdrawal of the reform, will begin at 9:00 a.m. local time in the main cities of the country. In the capital Bogota, the protesters will gather at the National Park and will march from there to the Bolívar Plaza. The organizers of the national strike and nationwide mobilizations have called on the demonstrators to follow all biosecurity protocols in place with greater responsibility to avoid the contagion of COVID-19. Organizations have also organized blockades of major highways and roads across national territory as well as other actions to express their rejection of the far-right government’s policies.

In the past days, various government authorities such as the Ministry of Health and the Attorney General’s Office, have called to postpone the mobilizations due to the third wave of coronavirus in the country. Tuesday, a day before the beginning of the strike, in a desperate attempt, the Administrative Court of Cundinamarca suspended the right to public protest on April 28 and May 1, revoking permissions for anti-government protests and Labor Day celebrations. The decision was widely rejected by trade unions, social sectors and the opposition. Following the court orders, the Ministry of Defense called on the people to not participate in the mobilizations.

La Campaña Defender la Libertad (the Defend Freedom Campaign), a network of social organizations that denounce arbitrary detentions, judicial persecution and criminalization of social protest in Colombia, condemned the order and emphasized that “it ignores the jurisprudence and the international norms in force on the matter (right to protests), since only the law can limit the exercise of the protest.” The organization highlighted that “the protest cannot be suspended even under states of emergency. Therefore, the Court’s measure violates guarantees of due process and due notification to interested parties.” It added that “these orders are not enforceable for citizens, since they can exercise the right to protest without prior permission.”

The campaign pointed out that “despite the court orders, the Colombian state has a legal duty to provide protection to protesters, even if the demonstration does not have the unnecessary prior “permission” and urged that “freedom and integrity must be guaranteed!” The organization pointed out that “the court orders do not sympathize with the reality of the country, the climate of dissatisfaction and imposes an unreal condition such as herd immunity, which is uncertain. Therefore, the measures become innocuous or empty, and unattainable by the citizenry.”

Similarly, Francisco Maltés, the president of the CUT, affirmed that “the Constitutional Court has said that the right to protest is fundamental and can be exercised when citizens agree. It cannot be denied, much less terminated, by any authority, not even in times of emergency, or in the conditions of state of exception. For this reason, we do not need to ask for permission from any authority to exercise this legitimate right.” Maltés reiterated that “on April 28, we are going on a national, peaceful, orderly and non-belligerent strike to demand the abolition of the tax reform.”

Senator Gustavo Petro of the progressive Colombia Humana party, warned that the government’s attempts to ban protests seeks to “create confrontations between the people and the police.” “What we need to understand tomorrow is that the success of the strike does not only depend on the success of protests. It is more than anything the cessation of all activities,” added Petro.

The said controversial bill was presented by finance minister Alberto Carrasquilla on April 15, as a tool to allegedly alleviate poverty in the midst of the health and economic crisis. In the name of solidarity, the government seeks to pass a tax reform that increases the VAT on staple goods, fuel, and various public services; expands the tax collection base; increases the tax on agricultural inputs; increases the tax on pensions; freezes the wages in the public sector until 2026; eliminates subsidies on various public services; imposes toll tax on roads connecting countrysides with cities; among other measures.

The trade unions and social organizations denounced it as a hard blow to the middle class and deemed it as “Duque’s neoliberal package”. They stressed that it threatens the economic stability of workers, pensioners, and people with lower incomes, and will only increase poverty and inequality in the country.

April 29: Second day of the strike

Day two of the National Strike in Bogotá and other cities—The strike keeps going!
After the massive wave of protests, marches and sit-ins that took place on Wednesday, there were new calls this Thursday, April 29.

Many protesters participated this Thursday in the second consecutive day of the strikes and demonstrations called for by Colombian unions against a tax reform bill.

“After the majestic strike of April 28, today the peaceful mobilizations continue in all major cities of Colombia demanding that the government withdraw the disastrous tax reform from Congress,” said the president of the Central Unitaria de Trabajadores (CUT), Francisco Maltes, during a march in Bogotá, in a video shared by journalists.

Military and police authorities reported roadblocks near Bogotá, and in the department of Valle del Cauca, where protesters disrupted vehicle traffic to Buenaventura, Colombia’s main port on the Pacific Ocean. There were also rallies and marches in cities such as Bogotá, Medellín, Cali, and Bucaramanga.

The most violent events of the previous day were reported in Cali, the third most populated city in the country, where a man died in a confrontation with police who charged at protesters.

The government of President Iván Duque announced that it is willing to modify the tax reform project through consultation in Congress, which, in addition to the unions and social organizations, faces the rejection of the majority of the political parties.

Heavy police repression
In Colombia, citizens took to the streets this Wednesday in a day of protests to reject the tax reform suffered the brutal repression perpetrated by members of the Mobile Anti-Riot Squad (ESMAD), action that is being defended by the Colombian government.

The protests were carried out in several cities, however, in Bogotá, Cali, Neiva, Medellín, Villavicencio, Yopal, Ibagué and Pasto, the demonstrations were brutally repressed by public force.

“In today’s conference this establishment did not hesitate to apply State terrorism and the war against mobilizations in different places,” denounced the president of the National Agrarian Coordinator, Ernesto Roa.

The Defend Freedom campaign denounced the repression that on Wednesday left 49 people injured, 73 people arrested, at least 10 attacks on human rights defenders, 78 complaints of police violence, and four people allegedly killed as a result of the actions of the security forces.

For its part, NGO Temblores reported that there had been 31 cases of police violence and at least 14 gunshots fired.

“The main targets in Medellín were human rights defenders and the press,” reported members of human rights organizations.

On social media networks, multiple videos circulated showing the repression and aggression on the part of the police officers in Colombia, who used detonations, tear gas and gunshots to crush the civilian protests.

Despite the cry of thousands of citizens in rejection of the reform and the evident violence that marked the day, Iván Duque only spoke out against “vandalism,” and was silent regarding any police excesses.

In addition, he confirmed that the tax reform in Colombia is moving forward. Citizens called to maintain the demonstrations and to hold another strike on May 19.

Hours later, the defense minister announced that they would send 700 more troops (including ESMAD) and 300 members of the Army to Cali as additional reinforcements. 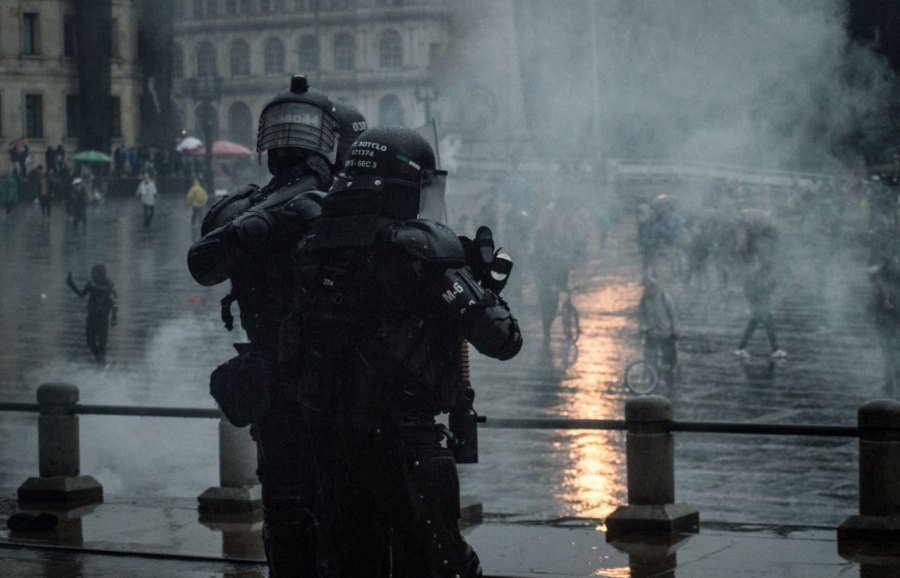 This measure arose from a request by extreme right-wing former president Álvaro Uribe Vélez, who on his Twitter account ignored the outcry of the Colombians and made an urgent call for the Army to take to the streets, because in his opinion the troops “are not doing enough to prevent vandalism.”

“Let us support the right of soldiers and police to use their weapons to defend their integrity and to defend people and assets from the criminal actions of vandalism and terrorism,” wrote the former president, who many point to as the power “behind the throne” in Colombia.

In this shocking turn of events, Uribe seemingly forgot about the “hurrays” of encouragement he had offered to violent Venezuelan protesters in 2014 and 2017, when they tried to oust the legitimate government of President Maduro and truly did commit terrorist actions, vandalism, and hate crimes.

April 30: Third day of the strike

This Friday, April 30, the streets of Bogotá again witnessed brutal police repression at the hands of ESMAD, who acted with total impunity, and without mainstream media or human rights NGOs denouncing the evident violations of human rights (as seen in the video below).