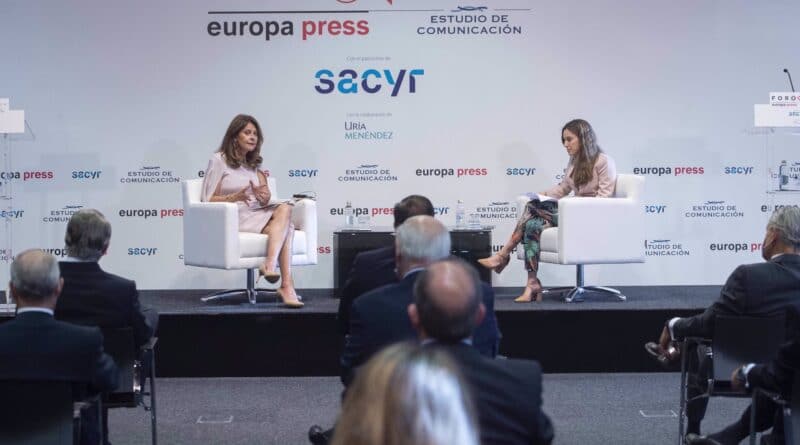 Marta Lucía Ramírez, vice president and foreign affairs minister of Colombia, paradoxically stated this Tuesday in an information forum held in Madrid that ”we have to learn to react in a timely manner when democracies are in danger.” She made this statement following the usual line of the Colombian government, referring specifically to Venezuela.

Colombian Vice President Ramírez considers that there is a need to review the current multilateralism mechanisms to be able to achieve ”a much more effective and timely reaction from the international community when there are democracies in danger.” These statements are same as those made by Colombian President Iván Duque last May, when he insisted on blaming the Venezuelan government of Nicolás Maduro for being ”a factor behind the instability of democracy in Latin America.”

Total support for migrants?
The Colombian vice president stated that it is an ”ethical and moral duty” to receive Venezuelans in the Colombian territory. It was in this regard that she urged the international community to react when there are ”democracies in danger.” However, although the Western media narrative presents the Colombian government as a good and noble recipient of Venezuelan migrants, the reality for thousands of those who have recently returned to Venezuela during the pandemic was one of xenophobia and hatred in the neighboring country. This demonstrates that the government of Colombia and its migration policies are not as protective as they are claimed to be in the media.

Asking support for Colombia?
”Colombia has taken on an enormous challenge by opening the door to Venezuelan migrants,” said the Colombian vice president in the Madrid forum. She informed that her government will regularize migrants in the coming months. This too is similar to what President Duque had said last month, that the expired passports of Venezuelans will be valid for 10 years in Colombia.

Colombian and international media have taken upon themselves the ”charge” of making visible the thousands of Venezuelans who were forced to leave for Colombia as a result of the intensification of the blockade and criminal sanctions against Venezuela by the US and allied governments. However, all this media apparatus has only helped ”Duque to continue to cheat the international community as he has done so far,” according to Venezuelan President Nicolás Maduro.

The Colombian president has been asking the international community for money to supposedly help the Venezuelan migrants in his country. However, whatever resources the Colombian government gained from begging for money have not been used for the stated purpose, and the whereabouts of the funds are unknown. The Colombian vice president did not speak of this during the forum.

Hypocrisy?
It is important to mention that the Colombian Vice President Ramírez, who has been linked to drug trafficking, and the rest of the Colombian government in general have been evasive about the ongoing violation of human rights in their own country. Colombia has experienced a seven decades-long civil war and armed conflict, and it is only now that the international community is beginning to notice it.

While in Venezuela the recent election of a new board of directors for the National Electoral Council (CNE) was characterized by pluralism in the political sphere, as it includes two opposition members in the five-member board; in Colombia, an investigation in 2020 revealed that Iván Duque was involved in a scheme of buying votes, which was managed by a drug trafficking group led by one of the most notorious criminals of Colombia.

Etymologically speaking, if the basic concept of democracy is taken into account, that of the ”government of the people,” it would be remarkable that Colombia is the country where democracy is in actual danger. That is why those who try to raise their voice against the ruling elites or who work selflessly for cooperative and collective benefits of their communities are killed by armed criminal groups protected by the government.

Arreaza responds
Venezuelan Foreign Affairs Minister Jorge Arreaza responded through his Twitter account to the statements made by Colombian Vice President Ramírez. ”Is the Colombian Foreign Affairs Minister asking the international community to be concerned and to react in a timely manner to Colombia itself?” wrote Arreaza in his post. ”Because in that case, the ‘international community’ is 70 years late. That would be justice!”