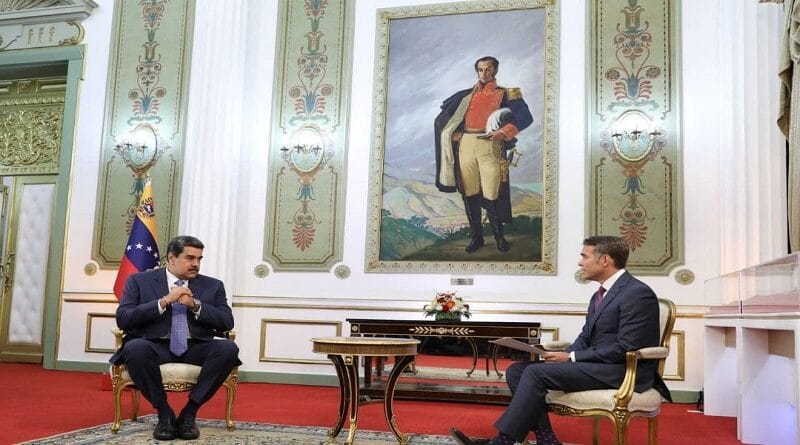 International News US/Canada
June 18, 2021 orinocotribune blockaded but not isolated, Bloomberg, bond holders, foreign investment, President Maduro, presstitutes, US and European blockade, US elite is not the US, US-Venezuela relations, Venezuela

The President of Venezuela, Nicolás Maduro, highlighted this Friday, June 18, that Venezuela’s relationship with US society is positive, and he therefore hopes to renew cooperation with the North American country as a whole, and especially with the ruling elites in Washington.

During an interview with US media outlet Bloomberg published earlier today, the head of state noted that US President Joe Biden, in his first speech on January 20, urged his compatriots not to “demonize” anyone in politics.

“I ask that the State Department stop the demonization of Venezuela, the Bolivarian Revolution and of President Nicolás Maduro,” said Venezuela’s president.

Maduro noted that to date there has not been a clear signal from the US president that he is willing to rebuild relations with Venezuela.

“There hasn’t been a single sign from Biden,” said Maduro. “The only thing different, which could be heard from some spokespersons in the White House and the State Department, is that they support a political dialogue between Venezuelans, without intervention, to seek democratic political changes in the country. It is the only thing, but I would say that it is a very timid signal.”

After years of sanctions from the Trump administration, Venezuelan President Nicolás Maduro says he sees no sign of policy changes from the new Biden administration yet, though he is hopeful.

President Maduro added that the reconstruction of relations between the two countries would be a “win-win,” as the financial sector had demonstrated already, prior to illegal unilateral coercive measures imposed by the US government.

“We have already shown that a win-win relationship is possible, the US financial sector knows this: the bondholders, with whom we had an impeccable relationship, they know that it is possible to invest in Venezuela and ‘win-win,’ as long as there are no sanctions and persecution. The oil, cultural, social, and political sectors know it as well,” he added.

Foreign investment
The president reflected on the need to boost the national economy through foreign investment, a need he described as urgent to boost the country’s battered economy, due to the blockade and persecution of those attempting to make transactions with Venezuela in international markets.

RELATED CONTENT: Venezuela Labels Migrants Donor Conference in Canada as a Media Farce: Where is the Money?

In that sense, the president commented during the interview with Bloomberg that he keeps the door open for US investment. “Venezuela is going to become the land of opportunities,” he said. “I invite US investors; do not be left behind.”

Blocked, but not isolated
Venezuela’s head of state said he felt relief and gratitude to have friends and allies around the world at this time that have helped Venezuela counteract the US and European Union’s imperialist siege and the blockade, which have severely damaged what was once one of the most prosperous economies in the region.

“Venezuela has not been, nor is it, isolated, as is portrayed in the international media campaign,” Maduro told Erik Schatzker from Bloomberg. “Venezuela has great friends and allies in the world.”

He affirmed that the Caribbean nation has great ties of friendship and cooperation in Latin America through the Bolivarian Alliance for the Peoples of Our America-Peoples’ Trade Treaty (ALBA-TCP), and with countries in Africa, and Asia. “The world extends beyond the West,” said Maduro. “The West must understand that the world extends beyond them, the United States must understand that the world has grown.”

He stressed that in the twenty-first century the world has become a multipolar world, and Venezuela’s development is linked with that of the emerging poles. Maduro also pointed out that Venezuela remains open to rebuilding relations with the ruling elite of the United States, and reestablishing dialogue and mutual respect.