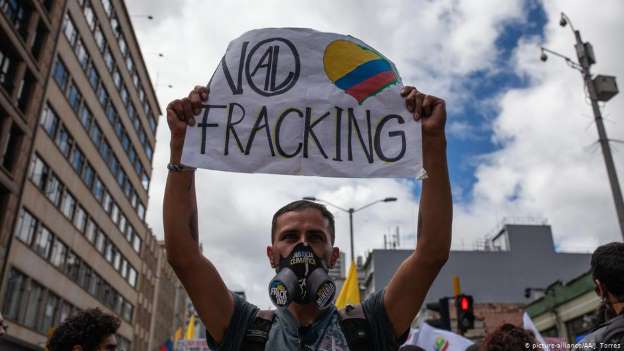 A Colombian court ratified the suspension of “fracking” in the country and imposed new conditions on future pilot projects when it ruled on an appeal for possible health and environmental risks of this technique for extracting hydrocarbons, a plaintiff confirmed today.

Those who oppose the technique have denounced risks linked to hydraulic fracturing or “fracking”, a controversial technique that consists of injecting water and chemical substances at high pressure to break up the subsoil layers, creating the release of oil and gas. Its defenders, however, say that oil and gas extraction is necessary to increase reserves.

The Administrative Tribunal of the department of Cundinamarca ordered “the establishment of a relationship of water supply and demand from agricultural, domestic and industrial activities in the areas of influence of the projects” in which this technique is intended to be used, to protect “the ecological flow of water sources,” states the ruling sent to the NGO Corporación Podion.

Colombian senator and former presidential candidate Gustavo Petro praised the court’s decision for defending life and water. “Fracking is nothing but a disastrous way to continue being addicted to oil while sacrificing water and life,” he said.

RELATED CONTENT: Colombia’s Santos: Venezuela will be “a Second Vietnam” for the US

Last September, the Council of State, the highest court of administrative litigation, maintained the suspension of “fracking” made into law in 2018, although it allowed the endorsement of pilot research projects, to review their viability, subject to the recommendations of a committee of experts.

The Colombia Free of Fracking Alliance, made up of environmental and trade union organizations, academics and activists, told Efe today that the ruling represents a new obstacle to this practice and reiterated its rejection of the development of the pilot projects as well.