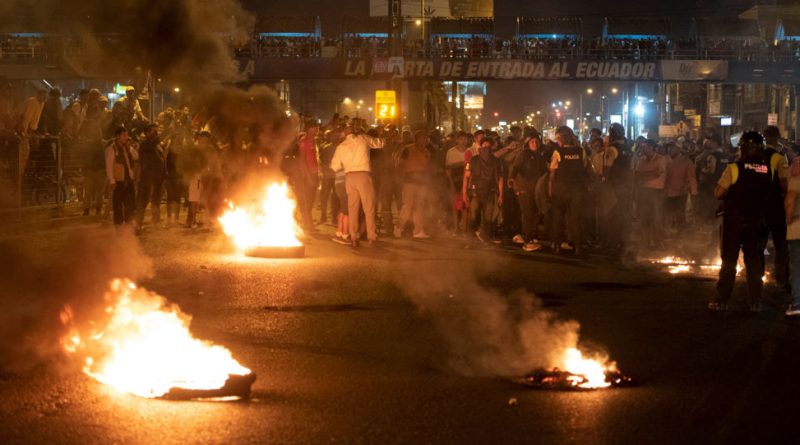 The former president of Ecuador and political leader Rafael Correa expressed his position regarding the accusations made by the Ecuadorian president, Lenín Moreno, against him, who held him responsible for the anti-government protests that take place in the South American nation. “The coup plotters are you, who have broken the Constitution as many times as you want,” Correa said responding to these unfounded accusations from the president of Ecuador, who is unaware of the popular discontent generated by his economic reforms.

These statements were offered by Correa in an exclusive interview for the international television network RT, based in Russia.

Correa stressed that Moreno’s accusations are “a sample of the alienation that Moreno has throughout his government, which has been blaming Correa for everything that has happened.”

The Ecuadorian head of state publicly accused the president of Venezuela, Nicolás Maduro, and the former Ecuadorian president Rafael Correa, of the acts of protest in that South American country.

Correa has pointed out, in the first place, that the declarations of the Ecuadorian president are “a sample of the alienation that Moreno has had throughout his government”, and has reproached him for constantly blaming him for “the bad economic management, of the growth of insecurity and the failure of all his policies.” In any case, Correa points out that “nobody can believe” Moreno’s claims, because his attitude “is really crazy.”

“Those who stole democracy are them”
“They say that we are coup leaders and that we want to destabilize the government,” said Correa, who is convinced that “the coup leaders have been them, who have broken the Constitution as many times as they like.” The former president said that his political adversaries “are not interested in democracy: they are interested in continuing to control power, controlling the Ecuadorian people” in order to apply policies “that harm the great majority but benefit their businesses.” “Those who stole democracy are them,” he says.

Correa has pointed out in any case a “constitutional exit” for this situation, and in his opinion it is none other than “anticipating the elections and having the people vote. ” “This is how conflicts are resolved in democracy: at the polls,” the former president insisted.

The former president has also commented on the way in which the hegemonic media are recounting what happened in Ecuador. In his view, the behavior of these media is “shameful.” ” It’s obscene how they hide the repression,” Correa says, “the country suffers a tremendous commotion and they keep broadcasting soap operas and cartoons (inside Ecuador).”

Moreno’s accusations
Specifically, Moreno had stated verbatim that “Maduro’s satrap has activated his destabilization plan together with Correa, ” and described both politicians as “corrupt” and evaders of Justice. “They are the ones behind this coup attempt, ” said the president, stressing that the people who incite violence are really “paid and organized external individuals.”

In addition, Moreno has announced the transfer of the government headquarters from the capital, Quito, to Guayaquil. “I have moved to the city of Guayaquil and I have moved the seat of government to this beloved city, according to the constitutional powers that correspond to me,” said the president.

“Pure story”: the pact with the IMF
Correa has also accused Moreno of lying about the size of Ecuador’s debt to justify a pact with the IMF – from which the controversial measures that he tries to impose on the population arise – that was not necessary.

“It’s pure story,” says the ex-president, denouncing that his political rivals “from the beginning betrayed the economic program” to try to “impose neoliberalism” and thus placate the power groups that support Moreno.

“These groups were looking for neoliberalism, the ‘save who can’, and minimize the State,” says Correa, who laments that Ecuador was not subjected to such harsh economic measures “for 14 years.”

Strong protests
Marches, rallies, demonstrations, confrontations with the police and other acts of protest have occurred in Ecuador since Moreno decreed the ‘package’, a set of measures aimed at complying with the agreement reached between Ecuador and the International Monetary Fund (IMF), which financed the country with more than 4,000 million dollars.

Among the measures that have raised the indignation of the population is the increase in the price of fuels (which represents a 123% increase in the case of diesel) and a set of labor and tax reforms that the National Assembly (Parliament) must approve.

In addition, for this Wednesday, October 9, the Confederation of Indigenous Nationalities of Ecuador (CONAIRE) has called a general strike with a demonstration in Quito.