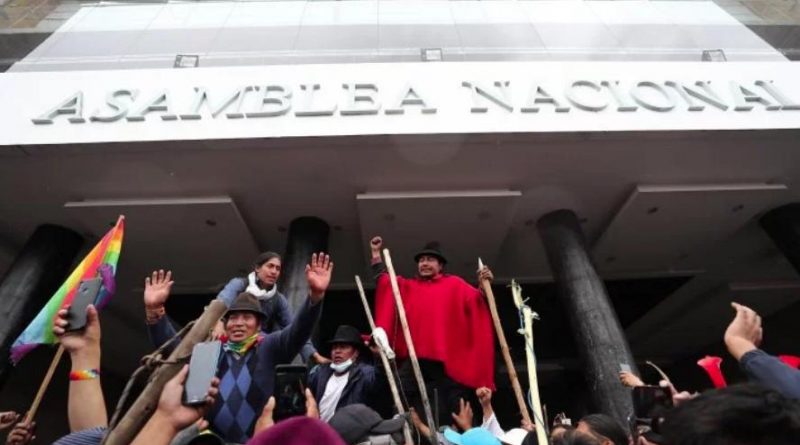 Indigenous movements and other Ecuadorian protesters on Tuesday took the building of the National Assembly (Parliament) of Ecuador to the shout of “Get out Moreno!”, after tearing down the security gates that rolled the headquarters.

The headquarters is near a park in Quito that served on Tuesday as a place of concentration for some 10,000 members of indigenous groups, on the eve of a march that aims for the repeal of recent economic measures or the departure of President Lenin Moreno.

The capture of the parliamentary headquarters took place in Yaguachi street in Quito, where the protesters reached the central square made up of several steps, from which the building is accessed, waving tricolor flags and grassroots organizations, he said.

The large group of protesters managed to break the security fence at the main entrance of the building and later a group of leaders, dressed in ponchos and canes arrived at the place where the public force was, local radio station Radio Calle reported.

The leaders have asked the protesters to remain calm and not unnecessarily provoke the security forces, and came to the place with their hands up.

One of them told the radio station that once they took the parliament hall, the forces began firing tear gas. Several detonations were also heard on the nearby 6 December Avenue, where armored riot vehicles arrived.

In the immediate vicinity of the building there were also members of the Mounted Police. Riots and protests in different parts of the country occur since last Thursday following economic measures adopted by the government such as the withdrawal of the fuel subsidy.