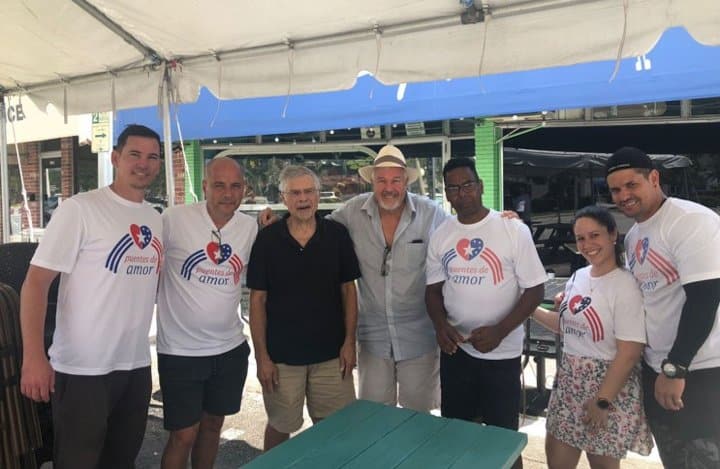 A 1,300 mile pilgrimage to end the US blockade of Cuba departed from Miami on June 27. Participants are walking to the White House in Washington, D.C. The 13th consecutive monthly caravan initiated by Miami Cuban-Americans sent them on their journey.

The caravan movement has spread across North America. Events were held in many cities on June 20 instead of the usual last Sunday of the month to mobilize ahead of the overwhelming vote on June 23 for Cuba’s resolution at the United Nations General Assembly. Only the United States and Israel voted against the resolution, while 187 countries voted with Cuba.

RELATED CONTENT: Venezuela Celebrates Cuba’s Victory at UN in Resolution Against US Blockade

A June 26 press release announced the send off:

“Cuban activists set off on a 1,300 mile walk from Miami to the White House demanding an end to the U.S. blockade. The send-off caravan will demand Biden heed the giant majority vote at the UN condemning the blockade.

“High school teacher and Iraq war combat medic veteran Carlos Lazo of Puentes de Amor, along with three other Cuban-Americans, will set out on a 1,300-mile march to Washington, D.C., at the conclusion of a send-off car caravan through the streets of Miami on Sunday, June 27.

RELATED CONTENT: Why This Year’s UN Vote on Cuba Embargo is More Urgent Than Ever

“‘It is time to lift the sanctions that weigh on the Cuban family. In the face of hatred and intolerance, it is high time that we extend a hand of generosity and humanity to a people who, in the midst of a pandemic, resist an economic siege,‘ says Lazo.

“Lazo’s pilgrimage to Washington, D.C., comes on the heels of a cross-country bicycle trip he undertook last year from Seattle to Washington, D.C., calling for an end to the blockade. That trip inspired Miami’s Cuban-Americans to start monthly caravans to end the blockade, a movement that has spread all over the country—and the world. Sunday’s Miami caravan will be the thirteenth one, each one larger than the one before.”