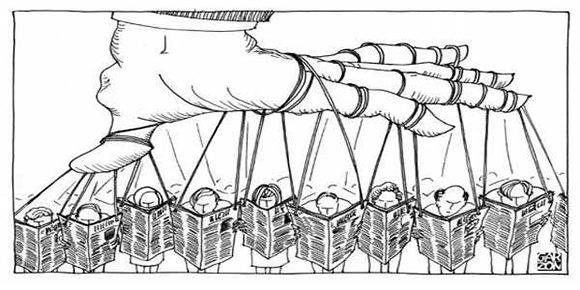 This January 27, while we were preparing different notes on national and international affairs, our website cubaenresumen.org was silenced. We could not upload any information, we thought at first it was due to a technical problem with the website.

After an hour we began to receive messages via WhatsApp from friends and readers of Cuba en Resumen in Argentina, Brazil, Honduras, Venezuela, Spain, the United States and Italy who were asking what was happening, since they could not access not only what was published in the morning, nor anything on our website.

We immediately contacted the server that is hosted in Canada, asking what was happening, since we also did not have access to the data.

Their brief and hypocritical response was as follows:

We have become aware that this account may be being utilized in connection to a country that is subject to U.S. embargo laws. This is in violation of the Linode Terms of Services, and as such, we must ask you to cease hosting with us.

Thank you for your understanding. You will have 48 hours from this notice to (back up your data) (https://www.linode.com/docs/guides/backing-up-your-data/) and/or migrate to another service provider before your account is canceled.

The message was sent by e-mail on January 24. As it was a support message, it was considered Spam. There was no other alert or communication during the peremptory period of 48 hours they imposed on us to at least try to save our web data.

This outlet in Cuba, part of the Argentinian media outlet Resumen Latinoamericano, has paid for the hosting of the server month after month, without running into any problems with the provider until now.  We are an informational media network that has been around for more than three decades bringing news and analysis out of Latin America, with correspondents and outlets in Argentina, Brazil, the United States, Peru and Venezuela.

Those of us who work on Cuba en Resumen are witnesses to the cruelty of the US blockade against the island. We experience it continuously in our daily lives, in our homes and in the work we do, and this is just one more example.

The first time they tried to silence Cuba en Resumen was in March 2020, at the beginning of the pandemic, when we were covering the arrival of the English cruise ship Braemar, which was sailing in Caribbean waters and could not dock in any port because it had numerous cases of COVID-19.

The company that blocked us at that time was Siteground, which currently does not allow access to any of the websites hosted by it from Cuba. Following that it was not easy to save the data and to migrate to another server and find someone who wanted to host us.

RELATED CONTENT: Cuba and the World Demand Lifting of US Blockade

Today the long reach of the blockade is once again trying to silence us. The Linode server in Canada knew perfectly well that our journalistic work is done from Cuba, so why now?

Many times we are asked from abroad if the blockade is real. This is a small proof of just how real the blockade is. The absurd attempt to silence us lays bare the lies and hypocrisy about the very manipulated freedom of press and information that we hear ad nauseam from the imperialists.

Right now we are concentrating on trying to save the data, and if necessary we will redesign a new site.

In spite of all this, our Resumen team here in Havana was still able to give coverage to the extraordinary March of the Torches that illuminated all of Cuba last night in homage on the 169th birth of the Apostle José Martí.

No one will be able to silence us nor prevent us from expanding our reach, we will continue to consistently denounce the crimes that the US has been committing, for too long now, against a sovereign country.

Graciela Ramírez is the editor of Cuba en Resumen and the co coordinator of the International Committee for Peace, Justice and Dignity