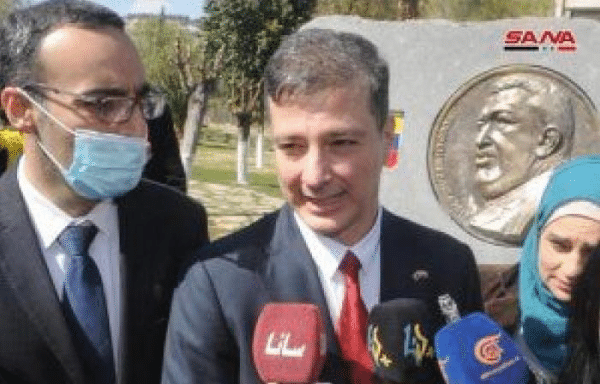 March 10 (Special for OrinocoTribune.com) – On Monday, March 8, Damascus University, together with the Embassy of Venezuela in Syria, commemorated the eighth anniversary of the demise of Venezuela’s revolutionary leader and former president Hugo Chávez. A monument honoring the late leader was inaugurated on the university campus in the presence of the Syrian Minister of Higher Education and Scientific Research, Bassam Ibrahim, and the Venezuelan Ambassador to Syria, José Biomorgi, reported Syrian Arab News Agency.

At the inaugural ceremony, Muhammad Abdin, the rector of the university, said that “in spite of the distance, we are sister nations, we share the same ideals and face the same challenges…With this act of homage to the Venezuelan leader, we strengthen our unity and, united with Venezuela, we will win.”

Ambassador Biomorgi pointed out that the aim of the event was “to acknowledge Chávez’s support and contribution for just causes in the Middle East, the fight of the Arab peoples against imperialist hegemony in the region, and especially the Syrian and Palestinian causes, which present an example of struggle and resistance against imperialism to the world.” Accompanying the Venezuelan diplomat, Ba’ath Party leader Muhsen Bilal said, “the greats do not die. Chávez is not dead. He lives on as a great leader of the Third World, of the militant international movements against imperialism, for sovereignty and self-determination of peoples around the world.”

In addition, an exhibition and a national competition of modern art, titled Hugo Chávez, was held by the university’s Faculty of Fine Arts. The exhibition was opened by the Venezuelan Ambassador, and took place in a hall bedecked with flags of Syria, Palestine and Venezuela. Twenty-five Palestinian and Syrian artists, including students and graduates of the aforementioned faculty, participated at the event, where they displayed paintings based on their ideas of Chavez’s vision and its significance for their countries at the present time. Palestinian painter Ahmad al-Khatib, a participant, expressed his gratitude for Chávez’s unwavering support for the rights of the Palestinian people, and said that “as Palestinians, as artists, this is how we remember and celebrate the great leader.”

In his closing speech, Rector Abdin thanked the Venezuelan people for their support of Syria, Palestine and other nations of the Middle East, suffering and confronting the same Western imperialist aggression as the South American country. He also recalled that it was Chávez who brought Latin America and the Middle East closer together in a multipolar world, and expressed his hope that the new and coming generations of the region will strengthen this alliance and carry forward the ideals of the Bolivarian leader.

In 2006, Damascus University conferred upon then-President Chávez an honorary doctorate in international relations, and in 2014, a year after his passing, a garden inside the university grounds was named after him.