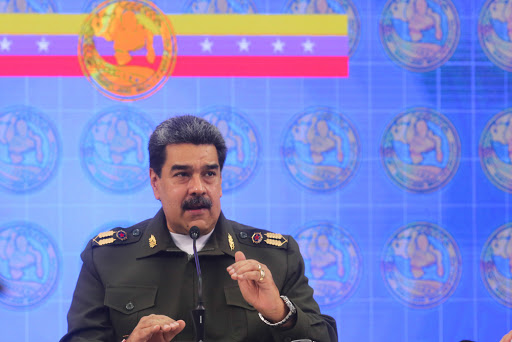 On Tuesday, March 9, President Nicolás Maduro warned that groups responsible for acts of destabilization in Venezuela also have plans of sabotage and conspiracy to steal weapons from the Bolivarian National Armed Forces (FANB). The President made this remark during the closing ceremony of the military drills “Supreme Commander Hugo Chávez Frías 2021,” in Caracas.

‘We know of your plans to steal weapons,” warned the president, referring to the groups involved in activities of sabotage. “We have heard it in the entire structure of the Venezuelan weapons system, they want to sabotage and steal a good part of the weapons system, create chaos in the system of defense…that we have today and know how to use,” said the Head of State in his speech broadcast by state TV station VTV.

He also repeated information recently provided by the Minister for Defense, General Vladimir Padrino López. “More than 600 cases of bribery to military officers by the Colombian Intelligence Directorate have been reported,” highlighted the president. “They have underestimated the moral, discipline and commitment of the Venezuelan soldier. Every day they are looking for a traitor to sabotage our armed forces, to disarm Bolivarian Venezuela,” he decried. 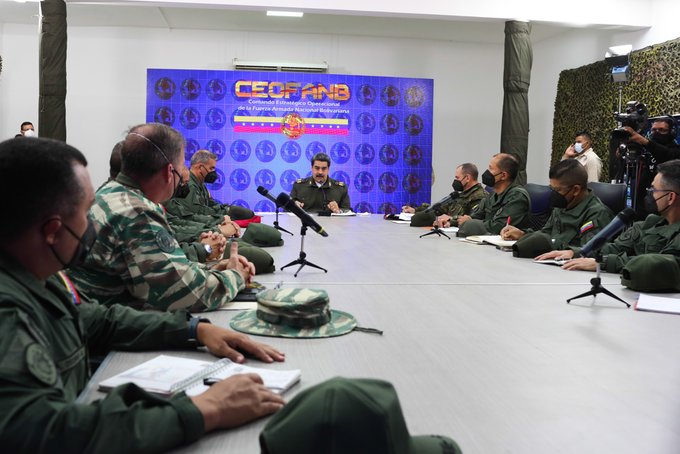 RELATED CONTENT: The Curious Case of ‘Han Solo’, a CIA Contractor Accused of Terrorism in Venezuela who Claims he was on a Simple Boating Holiday

The president focused on the need to have a strong military power at this time of the 21st century, an army prepared for multidimensional warfare. “Nobody respects the weak, the cowards and subordinates to the empire,” he said. For this reason, he added, the FANB has earned the worldwide respect for their “willpower and effort.”

The president assured that these recent military exercises were “a total success” because they allowed the nation to refine its powerful military systems as well as putting its operational, planning and command capacity to the test. “I think we are in a better situation every day,” he stressed. The idea behind these military drills is also to display the “capacity of immediate reaction in defense of the national territory whenever and wherever necessary, with the greatest professionalism and the greatest ability to harm the enemy with our defense systems.”

In this regard, the president assured that the threats against the nation have been thoroughly studied but “the principal ones against the stability, peace and happiness of the Venezuela. people comes from Colombia, specifically from the Colombian oligarchy, the repressive narco-paramilitary state of Colombia which has disappeared and tortured thousands of Colombian citizens in their own homeland.”

In addition, President Maduro denounced once again the acts of destabilization coming from the Casa de Nariño (Bogotá) against Venezuela. Such acts are planned daily by forces within the neighboring country, with consent and participation of President Duque, whom he called “mad and obsessive.” He cited the Operation Gideon as the most recent example; however, “despite the fact that we gave all the evidence” regarding the involvement of Colombia’s government, they mocked, relativized and even continued with their plans intact.

Finally, on this issue, the president said that the Colombian media has “rehashed” the old lie that Venezuela shelters and protects Colombian guerrillas. It is the way to create a casus belli to militarily attack Venezuela.

Results of the drills

The Strategic Operational Commander of the FANB (CEOFANB), Admiral Remigio Ceballos Ichaso, emphasized that the Hugo Chávez drills had several achievements. They were “a very important tool to prepare the people for the defense of the nation,” according to the norms established by articles 130, 322 and 326 of the Constitution.

He explained that these drills provided greater knowledge of the territory, because the commanders had to face first-hand “various problems” related to the technical-scientific capacity of the components. For example, they performed an amphibious landing in La Guajira (west) in the process of solving one of the issues. Ceballos specified that in total, more than 2,700 air, naval and land resources were used and 81 flight hours were effectively completed in 56 missions.

In addition, “we neutralized 5 Colombian drug trafficking aircraft,” all missile systems were activated, and more than 41 firearms were seized at the hands of criminals. “All the commanders put their planning and action skills to the test. And the most important thing is that we have paid tribute to our Supreme Commander who belonged to our Armed Forces,” he counted off the list of accomplished objectives. He ended by reiterating that the FANB continues to “ensure sovereignty, independence and territorial integrity” of Venezuela.

Maduro concluded by saying that “what Venezuela wants is to live in peace, in freedom, in democracy, in the rule of law and justice that we Venezuelans have given ourselves, the true recovery of its economy and its welfare state which has been harmed gravely by cruel, criminal and murderous sanctions.”