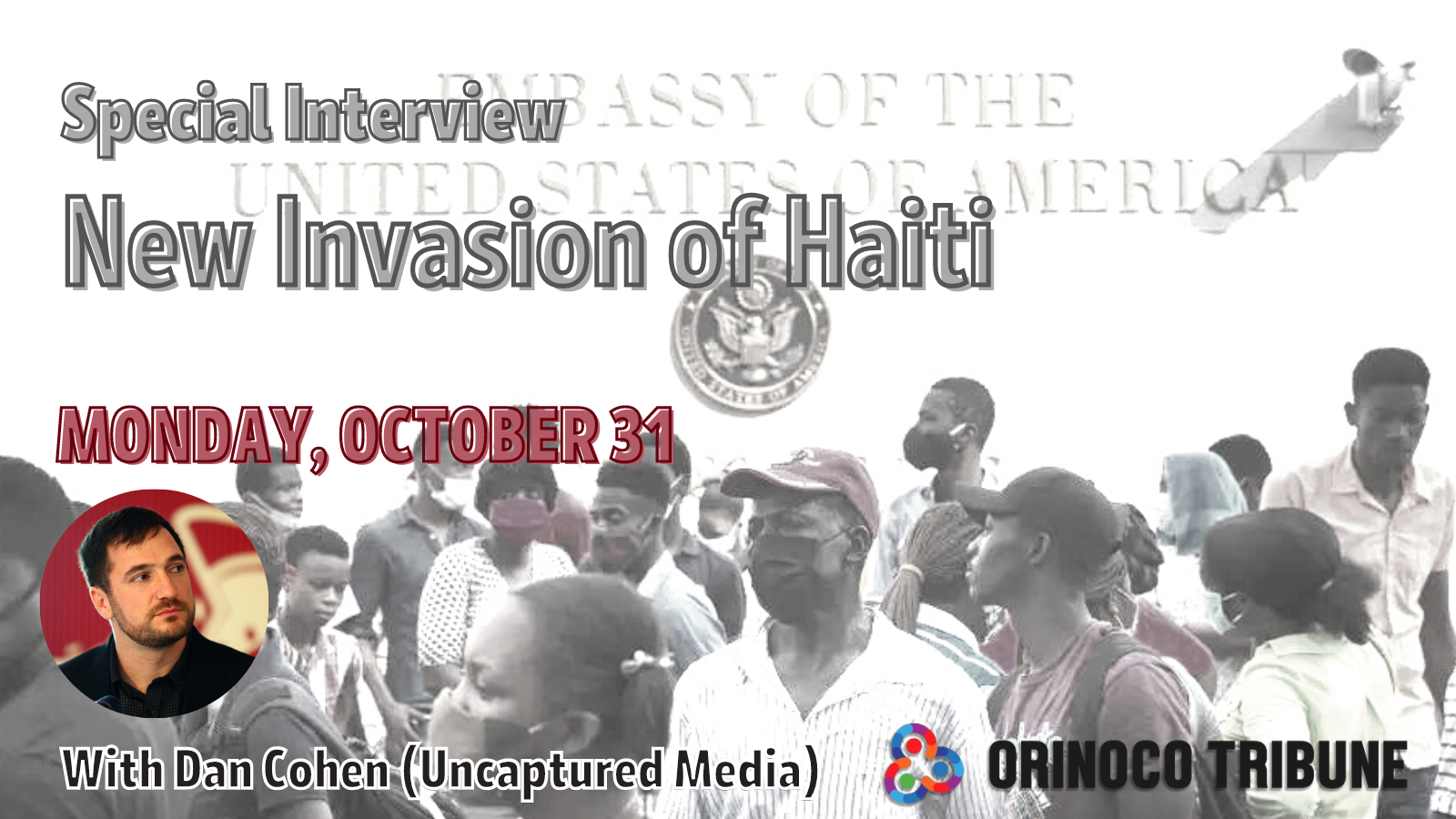 Poster with details of the interview and a photo of some people gathering in front of the US embassy in Port-au-Prince, Haiti. Photo: Orinoco Tribune.

Dan Cohen is a US author, journalist and blogger. He worked for RT America as a journalist based in Washington, D.C. He was also based in Palestine and produced widely distributed video reports, as well as print dispatches for outlets, including Mondoweiss, Electronic Intifada, The Nation, AlterNet, Middle East Eye, The Grayzone, Al Jazeera English and Vice News. He has also covered Haiti extensively.

The following topics were discussed in the interview.

1- Why does the US want to invade Haiti when it already has control of the country through the Core Group?
Cohen explained that gang violence is an issue in Haiti, but the US is pointing fingers only at Jimmy Cherizier aka “Barbecue,” the head of G9 and Family vigilante group, because they are building an armed revolutionary movement that is not complacent with the comprador Haitian bourgeoisie or US NGOs, multinationals, or any other foreign interests in the country. The US drafted-resolution called for targeted sanctions directed against Cherizier, giving a sense of what’s actually at play in Haiti.

No to US/UN Intervention and Sanctions in Haiti (Revolution Time?)

2- What is the situation on the ground in Haiti at this moment?
Cohen explained that the US and Core Group appointed de facto president, Ariel Henry, recently ended fuel subsidies causing the price of gasoline to double in matter of hours, creating a new crisis in an already polarized country. This ignited street protests that gave Cherizier, and his followers, the chance to take control of the Varreux fuel terminal, outside Port-au-Prince, and to demand Ariel Henry’s resignation. The Varreux terminal receives about 70% of the fuel in Haiti.

Cohen stressed that “the United States and its allies, instead of saying, ‘well there’s a legitimate reason for this protest, we need to repeal these fuel hikes and look at the conditions where people are living.’ Instead, they’ve said that, ‘this is the result of gangs, this terrible gangster Jimmy Cherizier and we have to go assassinate him.’ So the US has been looking for any way to use the United Nations to carry out a military operation alongside the Haitian National Police” to achieve this objective.

3- There is a possibility that Russia or China may veto the US drafted resolution to invade Haiti. What would the US do in that case?
“Right, so if this resolution goes to a vote then it is likely that Russia and/or China would veto it, preventing UN so-called peacekeepers from once again being deployed to Haiti,” Cohen commented. “The US is aware of that and it has proposed essentially deputizing a UN member state to carry out a military operation. Anthony Blinken, the US secretary of state, was recently in Ottawa talking to Justin Trudeau about getting the Canadians to to carry out this military operation.” However, it appears that Canada is not too keen on being the US proxy this time.

Cohen added that the US is trying to knock on the door of the Organization of American States (OAS) and CARICOM, but that too seems to be failing.

In this scenario, he pointed out that the Global Fragility Act, designed to bypass the United Nations under alleged extreme humanitarian circumstances in “fragile” states, seems to be the US government’s excuse of choice to launch a so-called “small footprint” US military operation in order to subject Haiti to a military occupation again and thus maintain US hegemony over the country.

US Tries to Bend UN Charter to Bless Illegal, Unwanted Invasion of Haiti

4- In reference to Latin American countries’ mistakes in approaching the Haitian issue, with Brazil earlier and now Mexico in the front seat, as well as progressive governments like those of Ecuador, Bolivia, Argentina and even UNASUR that in 2004 supported the peacekeeping initiative, Dr Jenina Pierre (Black Alliance for Peace) said that “the leftism of the Americas collapses at the door of Haitian sovereignty.” Why does this happen every time when it comes to Haiti?
“I think Dr. Pierre makes an important point,” Cohen said. “You know, we just saw the election of Lula da Silva in Brazil that just happened and many progressives are are celebrating, and understandably. I mean, the specter of another Bolsonaro term is quite terrifying for Brazilians. I think that is definitely a win, but if you look at what Lula did in the 2004 occupation of Haiti—he joined in with the Bush administration in sending these so-called peacekeepers that carried out horrific crimes against the Haitian masses. This has to be looked at and examined when Lula’s record is talked about.”

He added that Mexico was the co-sponsor of the UN resolution, together with the United States, calling for sanctions against Jimmy Cherizier. Mexico is also the co-sponsor of another UN resolution, jointly with the US, calling for military action in Haiti. Cohen questioned why Mexico is being part of this US stratagem, making a deal with the devil. He believes that the president of Mexico, Andrés Manuel López Obrador, and especially his foreign minister, Marcelo Ebrard, are making a terrible mistake by joining the US in a military intervention of a foreign country, a position that contradicts the current Mexican government’s progressive moves such as the rescue of Evo Morales during the 2019 coup d’état in Bolivia.

Closing his remarks Cohen said, “Ultimately, Haitians are going to liberate themselves and they’re not going to rely on the so-called international community… Haitians, once again, liberating themselves and completing the 1804 Revolution.”