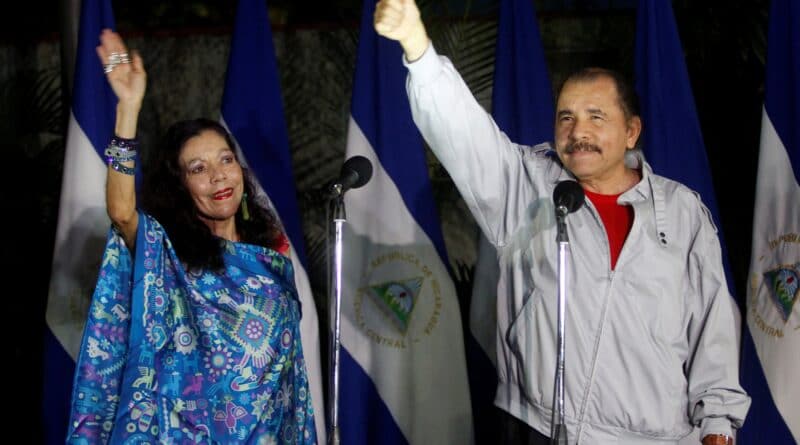 This article about Daniel Ortega reverses the typical order, it starts with the question of “What can we do?” and ends with a bit of history, Nicaragua’s and mine.

As you read, if you find yourself asking, “Really?” please consider checking some of the many links.

What can we do?

(1) RENACER Act in Congress—End US interference
Whatever you think of President Daniel Ortega, you can help the people of Nicaragua now. You can voice your opposition to a new, very bad bill which would ramp up Trump’s NICA act. The proposed RENACER Act, now in both houses of Congress, would increase unilateral coercive measures or “sanctions,“ which are illegal and lethal forms of warfare prohibited by the UN Charter. You can find more information, and consider how you can help to end US interference, here.

(2) Practise solidarity—”El pueblo unido jamás será vencido”
US interference is a huge problem in Latin America. Our job in the US is to organize and take action against that interference, even when we have critiques of other nations. We can take to heart the slogan, “The people united will never be defeated.”

“Divide and conquer” is the method of choice for maintaining a miserable status quo. An effective way to divide people is to personalize a struggle in the form of a single powerful person. It is much easier to malign an individual rather than attack a broad people’s movement and their beneficial accomplishments. Daniel Ortega is on a list with many other leaders in this hemisphere who have been targeted by the US, including Fidel Castro, Hugo Chávez, and Nicolás Maduro.

Solidarity with the people and policies of Nicaragua will help that nation. Conversely, lack of support and unbalanced criticism of Daniel Ortega will help the US government and media get away with character assassination and vilification when they freely allege dictatorship, fraudulent elections, corruption, and repression of the press and the people.

(3) Raise our expectations—and apply pressure!
Once we see through the lies of our governments and media, we can view sanctioned countries like Cuba, Venezuela, and Nicaragua as the “hope of a good example” rather than the “threat of a good example,” and we can learn from them.

When we look at policies and conditions we in the US have accepted without protest, and even how we have voted, it seems we have actually believed the dictum of former UK Prime Minister Margaret Thatcher, “There Is No Alternative”—TINA.

For an alternative, read this article written by Brian Willson, Vietnam Veteran Against the War and author of Blood on the Tracks. He has lived in Nicaragua for four years. The entire article is worthwhile, and be sure to see “The progressive Sandinistas” section half-way down. It lists the achievements since Daniel Ortega returned to power in 2007. Don’t you wish your country had gains like the ones the poor nation of Nicaragua achieved, rather than, for example, the gain of having the most incarcerated people per capita in the world?

We of the US can raise our expectations and apply pressure, even and perhaps especially on the “most progressive” elected officials and media outlets. The US can represent the power of a good example rather than a threat to the sovereignty and well-being of other nations.

What is the history?
Daniel Ortega and the Sandinistas had already lost the presidency in Nicaragua by the time I became “political” in early 1992. That was the year I went from “hating politics” to resonating with the values and no-corporate-money commitment of the Green Party, a brand new party in California.

In the early 2000s I began participating in political delegations in Latin America, inspired by the many nations moving away from the control of the United States and the super-rich, and toward improving the lives of all people. To the US, however, they represented the “threat of a good example.” Three of them, Cuba, Venezuela, and Nicaragua, were designated by Trump and Bolton as the “Troika of Tyranny.”

Before late 2020, I had very little specific knowledge about Nicaragua’s history, just that Daniel Ortega and the Sandinistas had been greatly admired in the US in the 1980s for their successful people’s revolution, and I knew of the movement calling for “US out of Nicaragua.” I knew that although they had lost power earlier, they regained the presidency, but I had the vague impression that Daniel Ortega had become corrupt and authoritarian. In other words, he was good before, but not now.

On December 27, 2020, when I saw an email from Alliance for Global Justice, I felt a jolt of energy and I knew I had to join the upcoming “Yes to Sovereignty! No to Sanctions!” delegation sponsored by Friends of ATC and Sanctions Kill. I knew “tyranny” was a lie about Cuba and Venezuela, countries I had already visited, and I wanted to see if it was also a lie about Nicaragua.

I learned a lot.

I learned that people are not migrating out of Nicaragua like they are from Honduras, El Salvador and Guatemala. Unbelievably, given the media it gets, Nicaragua is a safe, low-crime country, with 90% food sovereignty, free healthcare and higher education, and improved infrastructure like roads, water supply, sewage, land titles, and electricity, all of which give people hope that they can stay in their own country rather than risk a dangerous trip leading to a hostile US reception.

A question that stuck in my mind was this: if the government is so “corrupt and authoritarian,” how is it that they have all these good things? See the more comprehensive list in Brian Willson’s article, also mentioned above.

Another question arose because I know good progressive folks who believe that between the 1980s and 2000s Daniel Ortega “sold out” his Sandinista roots, “moved to the right,” and became more “neoliberal” and “capitalist.” Why then was Nicaragua targeted with sanctions and listed with Cuba and Venezuela as a member of the “Troika of Tyranny?”

Ortega and the government of Nicaragua are not perfect, and they do not need to be. I am amazed, however, at what they accomplished with the power of the US against them since 1979, except for the 17-year period from 1990 to 2007. That’s when the US supported the Nicaraguan presidents who set about undoing benefits to the people and privatizing essential services including water.

RELATED CONTENT: Nicaragua, Among the 10 Safest Countries in the World to Visit Despite COVID-19

My head spun when reading about the complexities of the 2018 “Uprising or Coup.” Even though lies can be 180 degrees from the truth, they spread quickly via mainstream and social media. Refuting lies is not as quick a process as the spreading of lies. This article is a good summary and it also has a link to a free book of essays by many writers who know Nicaragua.

In 2021 this information is especially important because Nicaragua has a presidential election in November. Leading up to an election is when the US typically increases its interference—which takes us back to the top of this piece about the RENACER actions we can take now. Interference takes the form of dollars flowing into the opposition’s hands and adverse allegations flowing into our minds through the media. The most used allegations are “election fraud” and “human rights violations” and this year it’s “COVID scares.”

A final note, on tourism. Nicaragua is a beautiful and safe place for tourists, with Pacific and Caribbean coasts, tropical islands, lakes, flora and fauna, and volcanoes. Tourism is often forgotten when considering how sanctions diminish the economies of beautiful countries—and the pleasures of would-be tourists.

This short 2-minute video will give you a quick flavor of the March 2021 Nicaragua delegation. See a surprising flower that had burst open in my hand in Granada, one of the many lovely areas of Nicaragua. And this feature-length documentary of the delegation Nicaragua Against Empire is beautiful and filled with great information. It premiered in recent weeks and already has more than 6,000 views. I hope you are able to see it.