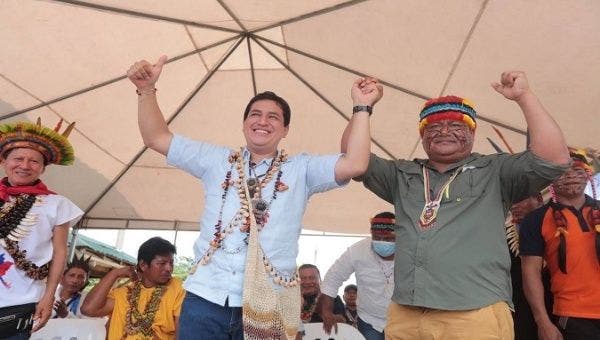 The Union for Hope candidate is contesting the presidential election runoff to take place on April 11.

Confederation of Indigenous Nationalities of Ecuador (CONAIE) President Jaime Vargas announced his support for the Union For Hope (UNES) candidate Andres Arauz ahead of the presidential election runoff on April 11.

The announcement was made after the conclusion of Arauz’s electoral campaign in Sucumbios province on Saturday.

“We are building national unity by putting Ecuador first. We are summoned by the plurinational state, truth, justice, and reparation.” Arauz twitted in gratitude.

Vargas’ statements are made despite a decision approved last month by CONAIE to promote “the null vote” in the runoff elections after the Pachakutik presidential candidate Yaku Perez failed to stay in the race.

Only the pollster “Cedatos” favored the other election’s contester, the Social Christian Party candidate Guillermo Lasso with 38.2 percent of the votes.

On Thursday, the National Electoral Council of Ecuador conducted a mock election in which 1,218 voting boards were activated.