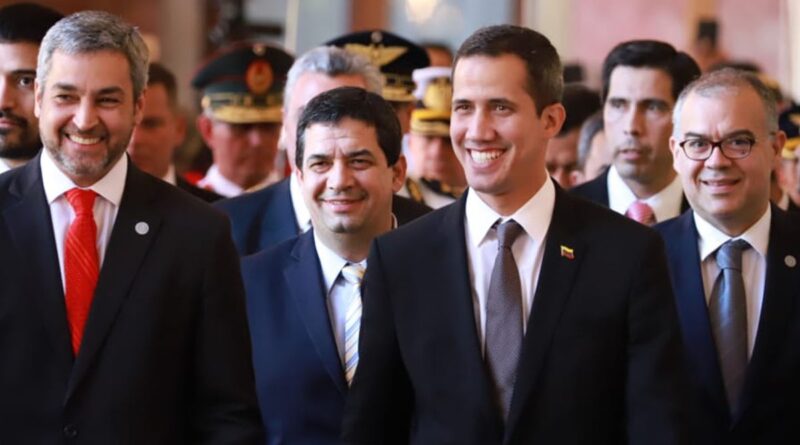 Juan Ernesto Villamayor, Chief of Staff of the Government of Mario Abdo Benítez in Paraguay, was questioned this Thursday in the Chamber of Deputies of Congress for his role in a meeting he held with Javier Troconis, a pseudo-official appointed by Juan Guaidó for “recovery” of assets of the Government of Venezuela abroad. In this meeting, a reduction of the debt that Petróleos Paraguayos (Petropar) has with Petróleos de Venezuela, SA (PDVSA) was discussed, reported the EFE agency.

EFE reported that Villamayor was forced to answer a questionnaire of 15 questions, given to him in advance, after the corruption plot was revealed by The Washington Post. In addition to Troconis, another businessman linked to Guaidó, Fernando Blasi, is also involved.

The exorbitant deals of Blasi and Troconis reached amounts of $40 billion, according to information provided by fellow entrepreneurs Jorge Reyes and Pedro Antar to the US newspaper, verified through other sources before publishing. The detailed report also asserted that the motivation of the self-proclaimed interim president behind this asset-plundering operation was his need for cash.

Then, the “businessmen” turned into “officials” of Guaido’s fake government, presenting to the former deputy a plan to seize state resources, which involved seizing shares of companies, houses and luxury cars in the Caribbean, as well as collecting on PDVSA’s outstanding debts.

It was at this point that Villamayor appeared. He met with Troconis and they agreed to cancel half of Paraguay’s $269 million debt with the Venezuelan state oil company, plus a commission of $26 million for an Argentine lawyer, Sebastián Vidal, who would be in charge of the transaction.

The Paraguayan Chief of Cabinet admitted that the meeting took place in the Government Palace of Asunción on November 11, 2019, but said that “it was exploratory and in view of the possibility of an agreement on the debt of Petropar to Venezuela’s PDVSA… On that occasion there was talk of a pre-agreement, through which Paraguay would have an advantageous way out with the debt… And that would have saved it $160 million, paying it in cash, without interest and other punitive measures,” reported EFE.

The Spanish news agency specified that the debt dates back to a bilateral agreement signed between the governments of President Hugo Chávez and Fernando Lugo in 2009. In 2011 “a refinancing schedule was established” in which the interest rate was increased from 2 percent to 4 percent and a trust was established in a bank in the Bahamas which, according to Paraguay, “departed from the Caracas agreement” of 2009, and was used as justification for not honoring the debt following the ouster of Lugo in 2012.

From Venezuela’s point of view, if these actions did occur they will join the long list of robberies committed by Juan Guaidó and his usurping officials, who in just a couple of years have stripped Venezuela of between $20 and $40 billion, according to estimates by the Bolivarian Government.

However, Villamayor assured that the transactions could not advance because the case was settled in the International Trade Court, where Venezuela took the dispute in 2016. The court required that “the legal status of Mr. Guaidó be recognized.”

In the hearing, the official dissociated himself from the bribery agreed to with Vidal, arguing that the lawyer had been hired “by the government of Venezuela”—the one usurped by Guaidó, which is the one recognized by Paraguay’s right-wing President Abdo Benítez—and that the $26 million would’ve been for payment of “fees, not commission.” As “proof” he showed an email in which Troconis “accepts Mr. Vidal’s legal services,” dated one month before the meeting in Asunción.

Within Paraguay, the publication of the extensive report by The Washington Post caused immense uproar, even within a faction of the ruling right-wing Colorado Party—hence the hearing to which the senior official was subjected. Although it is not binding, the hearing can set a precedent for those who oppose stronger action on the part of the current government.

On January 12, congressmen from the Guasú Front, one of the most prominent left-wing coalitions in Paraguay, demanded that the Legislature initiate a political trial against President Mario Abdo Benítez, due to the secret deals that he tried to execute with Guaidó’s representatives.

In a statement, the Guasú Front questioned Abdo Benítez for trying to “ignore” the corruption scandals “as if he didn’t know anything about what occurs in the field of State agencies and portfolios.” The statement demanded that the parties “with legislative representation not be complicit in these new scandals of surrender, corruption, and impunity,” and initiate the steps leading to the prosecution of the president, to whom they attribute primary responsibility in the case.