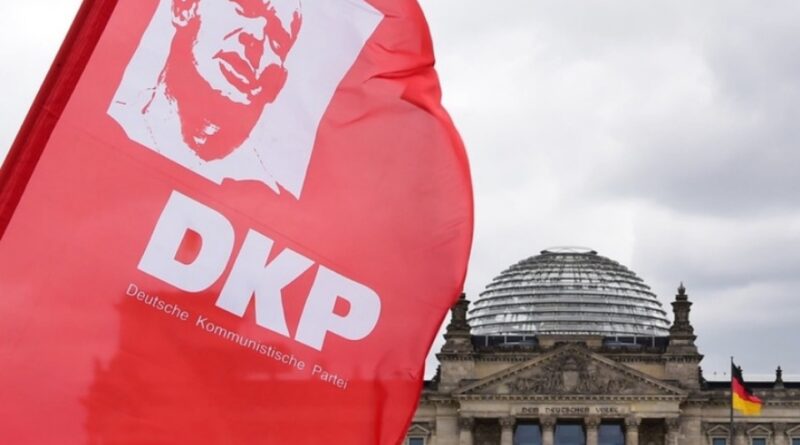 On July 8, a committee of the German parliament responsible for arranging the election scheduled for September 26 decided not to allow the German Communist Party (DKP) to run for office. The Federal Election Committee of the German Bundestag, which includes representatives of the extreme right-wing “Alternative for Germany,” ruled that candidates of the DKP will not appear on ballots anywhere in the country. The committee used the late submission of accounts as a pretext for its ban on the Communists.

The leadership of the DKP learned about the decision only through press reports. The Federal Election Commissioner apparently did not even consider it necessary to inform the party, which has democratically-elected representatives in several cities and towns. Only an inquiry by DKP chairman Patrik Köbele brought to light that the committee claimed delivery of the party’s accounting reports had been delayed.

The actions of the Federal Election Committee present a very serious problem for the DKP—beyond just the upcoming election. With this ban on participation in the September vote, the DKP is also threatened with possibly having its status as a legal political party revoked.

Köbele said that although the decision was not an open outlawing of the party, it was in effect a “cold” party ban.

“This is what we Communists are familiar with,” he said. “In 1933, the Communist Party was banned by the fascists, in 1956 by [Chancellor Konrad] Adenauer. It’s fearful that this should now take place in 2021 by bureaucratic means.”

As Köbele mentioned, political attacks on Communists are by no means new in German history. Since the beginning of their appearance as a political party, the German Communists have repeatedly had their existence threatened. Within days of the founding of the Communist Party of Germany (KPD) in January 1919, the leaders of the counterrevolution that pushed back against workers’ uprisings at the time targeted the party for destruction. Karl Liebknecht and Rosa Luxemburg, KPD leaders, were murdered that same month.

This fate met many active Communists in the years that followed, until finally, in January 1933, the government of Adolf Hitler, hoisted into office by the masters of industry and the banks, completely outlawed the KPD. German Communists were among the first to be arrested by the Nazis and thrown into prisons and concentration camps, tortured, and murdered—among them the unforgotten KPD chairman, Ernst Thälmann.

After the fall of Hitler and the end of the war in 1945, KPD members were subjected to new persecutions by the West German government. When resistance to remilitarization in the Federal Republic of Germany became too strong in the early 1950s, the Free German Youth (FDJ), an organization in which young communists and other anti-fascists had joined forces, was initially banned. The ban of the KPD followed in 1956, and many of the Communists who were then thrown into prisons faced the same judges who had sentenced them during the Nazi era.

Since then, the DKP, newly founded in 1968, has had to contend with many difficulties thrown in its path by the state. The Communists chalk it up to the fact that they consistently oppose armaments and war, stand up for the social rights of the people, and expose the anti-social measures of the state, especially now in the health crisis.

As for the latest injunction against the DKP, Köbele said, “The deprivation of party status would be an attempt to drive our party into financial ruin. This joins the various scandals in which attempts are made to ruin progressive organizations via the withdrawal of non-profit status.” The attempt to squeeze out the DKP is part of an increasing trend of criminalization and slander against leftist forces and an escalation of state actions against them.

The DKP argues it is a case of the Cold War continuing unchecked against Communists and leftists today, but the party says, “History has shown that you can ban a communist party, but not its idea of creating a just society without exploitation of man by man.”

The party has four days to appeal the decision to the Federal Constitutional Court.

Featured image: The flag of the German Communist Party (DKP) flies in front of the Bundestag building in Berlin. Photo: DKP