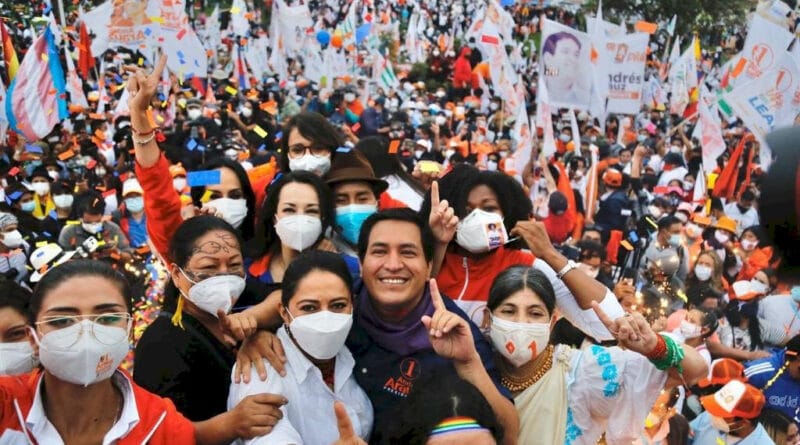 After negotiating innumerable tricky legal obstacles imposed by the National Electoral Council (following Lenín Moreno’s orders to knock the correístas out of the running by means of lawfare—the legal equivalent of warfare), the team of Andrés Arauz and Carlos Rabascall were able to participate in the elections and win the first round. Although the polls had predicted a percentage of the votes greater than 36 percent (only one of them had  Arauz and Rabascall’s figures almost precisely correct), we are sure that, finally, in the midst of a messy recount, Arauz won with 32 percent of the votes. Almost exactly head to head, and separated by only 0.27 percent, were Yaku Pérez (19.87 percent) of Pachakutik, and the banker Guillermo Lasso, who, in his third try for the presidency, got 19.60 percent of the vote. However, there are still a few votes to be counted that, due to their regional location, may switch this situation around and put Lasso in second place. At the time of writing this, the National Electoral Council still had not concluded the counting.

There were two surprises in the ballots of yesterday. One was the advance of Perez, who, in all the previous polls, had never seemed to be in a position to advance to the second round, competing for a spot that Lasso’s team felt was a sure thing. The other was the sudden surge of Xavier Hervas, a “dark horse,” as political slang has it, who went from nothing—around 2 percent—to 16 percent of the vote in less than three weeks, making his appeal through an intense, and extremely effective, campaign on social media, especially TikTok. Facebook, young people tell me, is for old people; Hervas also knew this and attracted a significant volume of youth votes with his strategy. There was something else new, not so much surprising in and of itself, but notable for how completely it occurred: the downfall of the historical right-wing of Ecuador. On this occasion Lasso, and his CREO party, joined forces with the Social-Christians of Jaime Nebot, who was the mayor of Guayaquil for almost 19 years, (which never stopped him from displaying his inconsistency and launching flamboyant criticisms of the “anti-democratic re-electionism” of Rafael Correa, Evo Morales, and Hugo Chávez), and also with his successor as mayor, Chyntia Viteri. In the first round of the presidential elections of 2017, running as separate parties, they obtained a combined 45 percent of the vote, but now, unified, they barely scraped together 20 percent. Lenín Moreno delivered a devastating blow to neoliberalism when the official candidate, his Minister of Culture Juan Fernando Velasco Torres, came up with an embarrassing 0.82 percent of the votes.

RELATED CONTENT: Ecuador: The Indigenous Arm of the Arauz-Rabascall Formula

What we will see in the weeks ahead is an exhausting electoral campaign lasting more than two months, because the second round will take place on April 11. Meanwhile, a tough battle in the National Electoral Council and in the legal system is in the making, to determine who will compete against the correístas. There is plenty of speculation about who will be most vulnerable to a campaign offensive by Arauz. There are those who prefer the banker, because in that case the contrast between the two candidacies would be absolutely clear, and also because Lasso was co-ruler with Moreno in the past four years, and has to share the responsibility for the debacle in which both have sunk the country. This is certain, but it is also certain that, if there is one politician in Ecuador who has enormous power in the financial, media, political, and legal realms, that figure is none other than Lasso.

He can purchase, or bribe, lots of good will; mobilize the hired-gun press and legal authorities, and invest huge amounts in his campaign without any problems. The whole establishment will line up unconditionally behind his candidacy. Others who surround Arauz say that he would prefer a second round with Perez. It may be that Perez’s apparently progressive and leftist rhetoric might fool many unwary people, with his defense of water and the environment. I say fool because, as the great Brazilian environmentalist Chico Mendes, who was assassinated by landowners said, “ecology without a critique of capitalism is just gardening.” Perez does not criticize capitalism nor does he suggest the historical necessity for replacing it with something better. Furthermore, he has never stopped attacking the “dictatorial and fraudulent governments“—his words—of Bolivia, Venezuela, and Nicaragua; in this area his alignment with Washington’s directives is complete, and doesn’t appear to be coincidental. That’s not all: he favors the elimination of taxes on the exit of hard currency, just as Lasso does; this is a super-sensitive topic for bankers and the business elite of Ecuador.

In addition, we should remember that in the 2017 balloting, Perez asked indigenous communities to vote for Lasso. He said, and we quote, “it is better to have a banker than a dictatorship.” A well brought-up man, and full of Christian gratitude due to decades of militant membership in Opus Dei, Lasso stated some days ago that, in case he does not make it to the second round, he will support Perez in order to defeat the “populist totalitarianism,” represented in the flesh by the diabolic figure of Rafael Correa.

There is no doubt that the next two months will be full of new things and of many surprises for Ecuador. We hope that, at the end of this twisting path, we will have good news for the greater Latin American community.