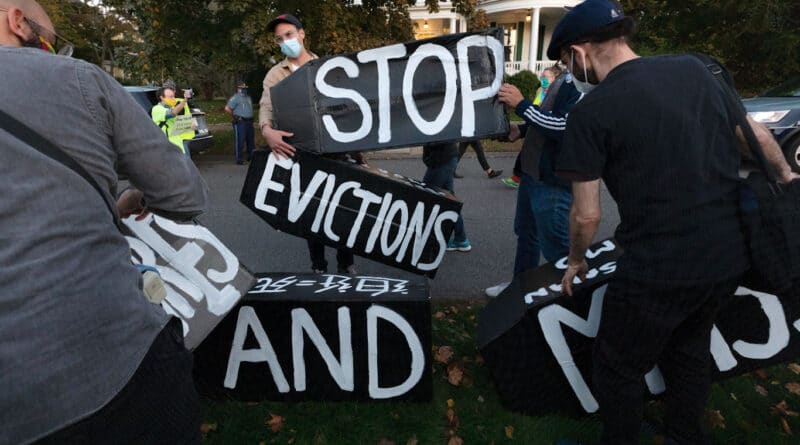 Corporate media outlets appear to have so completely internalized the grim logic of neoliberal capitalism that they see single mothers being evicted, children in debt, or octogenarians working in the gig economy as unremarkable facts of life, not damning indictments of a broken system.

Texas teenager has been forced to use her entire college savings to prevent her single mother from being evicted after she lost her job amid a raging pandemic. Alondra Carmona of Houston made the appeal on crowdfunding site GoFundMe, noting that she had been accepted into prestigious New York university Barnard College, but that she used the money she had saved for tuition in order to save her mother.

Yet corporate media, including a host of ABC affiliates as well as soft news website “Good Morning America, have presented the story as an uplifting tale of generosity. Indeed, ABC published it in its “acts of kindness” section, an area generally reserved for stories about kittens being rescued, celebrities funding children’s hospitals, and the like.

None of the outlets appeared interested in any of the worrying trends the story brought up. Should single mothers really ever be evicted, especially during a deadly pandemic? Why do working-class American children need to self-fund their own college tuition when college in most other developed nations is free or close to it?

Carmona’s story could have been used to highlight many of the most pressing problems in American society, including ever-rising rents, the exploitation of the poor, the government’s incompetent handling of the COVID-19 pandemic, the greed of landlords, or the enormous cost of attending college. But it was not. Instead, corporate media invited readers simply to laud Carmona’s dedication to her mother without raising any tough questions that would require them to scrutinize the economic and social order their owners and advertisers promote and benefit from.

Judging by comments left on its social media, not everybody appeared to accept ABC’s uplifting framing of the story. “In what world should this be normal?” and “Failed state” were the two highest-rated replies underneath the news, while Lee Carter, a candidate for the Governor of Virginia claimed that, “This is not heartwarming. This is a horrifying story of people having to sacrifice because political leaders have failed us all.”

This is not heartwarming. This is a horrifying story of people having to sacrifice because political leaders have failed us all. https://t.co/lqKeoLxg3Q

Evictions are known to have led to around 11,000 extra COVID-related deaths nationwide between June and November alone, with Texas responsible for 4,456 of those. The state recently hit a record high number of average daily deaths, the pandemic killing over 300 people every day on average for the past four weeks.

Thanks to a wave of public sympathy, Carmona was actually able to meet her GoFundMe goal today, meaning that she will be able to attend college in the future. But she is one of the lucky ones.

Unfortunately, corporate media appear so out of touch that they regularly frame horrifying news of unnecessary struggling under capitalism as inspirational, heartwarming, or uplifting. For example, in July, News Center Maine presented news of an 84-year-old local woman taking a job as a motel housekeeper as a “pick-me-up story,” while in September, NBC10 Philadelphia told the story of an 89-year-old pizza delivery driver receiving a huge tip. Neither suggested that there was anything wrong with the elderly doing dangerous, poorly paid, insecure manual labor during a deadly pandemic.

Other recent examples of perseverance porn include NBC News’ January report on a South Carolina high school principal who works the night shift at Walmart to buy food and supplies for his students, 90% of whom, NBC casually noted, were living below the poverty line. Instead of presenting the finding as a searing critique of a system that forces elderly men to work round the clock to make sure children don’t starve in the richest country in world history, it invited readers to feel pride and honor at the man’s selfless actions, not bringing up any troublesome questions about the implications of his work.

This, in the richest country in the world… https://t.co/2vEs8JDxEp

Meanwhile, a “feel good” story from The Hill about a 5-year-old child selling snacks to pay off her classmates’ “lunch debt” drew considerable blowback online from outraged readers who seemed to be more concerned about indebted toddlers than their generous friend. “This isn’t a feel good story, it’s a dystopian nightmare,” wrote podcast host and political commentator, Kyle Kulinski.

Triumphing over adversity has been a standard trope of storytelling for centuries. Therefore, it is not surprising that media fall back upon this framework in their reporting. However, in today’s world, so much unnecessary adversity and suffering come as a direct result of how society is structured. Yet journalists at corporate media outlets appear to have so completely internalized the grim logic of neoliberal capitalism that they see single mothers being evicted, children in debt, or octogenarians working in the gig economy as unremarkable facts of life, not damning indictments of a broken system. Because of this, they appear unaware that readers less dedicated to free market fundamentalism might see something wrong with these stories.