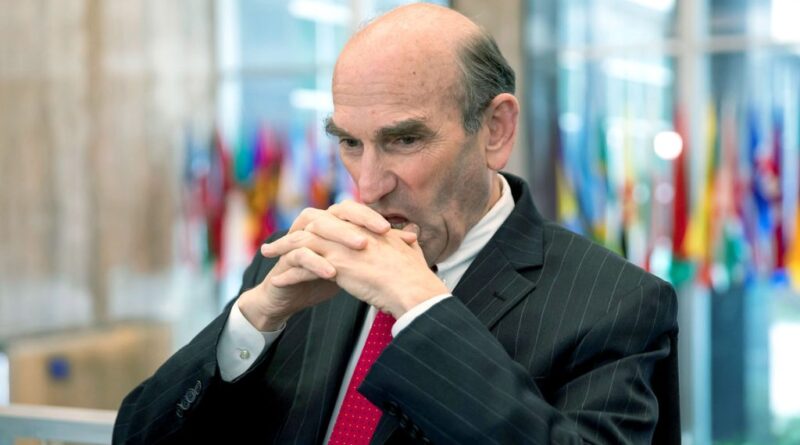 The “special envoy of the United States for Venezuela and Iran,” Elliott Abrams, expressed his concerns about the future of all the actions that the Donald Trump administration has adopted against Venezuela, especially because he believes that the president-elect, Joe Biden could “relax” in the application of the total blockade and the imposition of coercive measures against the Venezuelan Government presided over by Nicolás Maduro.

In an interview with Reuters, Abrams said that “there is a strong bipartisan consensus in Washington on the need to keep up the pressure on Maduro,” and that he doesn’t expect major policy changes in the United States when Biden takes office on January 20.

For this reason, he asked the future government of Joe Biden to “use the influence that he believes has been obtained through the harsh sanctions destined to oust President Nicolás Maduro from power” and asked Biden not to offer him any “gifts.”

However, Abrams commented that he has “always” been “concerned” that the Democratic government may “relax with Maduro,” although he has seen no signs of that from Biden and his advisers. Instead, he urged Biden to strictly maintain the sanctions in order to keep suffocating millions of Venezuelans in the hope of ousting the democratically elected government of President Maduro.

Abrams also threatened to apply more US sanctions against anyone responsible for “electoral fraud” in the upcoming parliamentary elections of Venezuela, scheduled by constitutional order for this Sunday, December 6, echoing what his boss Trump has been saying everyday since US presidential election last month. Donald Trump has been claiming for more than a month that he has won the presidential race of November 3 while all evidence points to the contrary.

“They [Venezuelans] are really against the wall,” Abrams said, referring to the grave impact of the sanctions on the Venezuelan economy. “And we have a lot of influence; we should use it… My advice [to the Biden government] would be not to give Maduro any gifts.”

According to Reuters, a spokesperson for Biden’s transition team declined to comment.

For now, reports Reuters, “Biden and his advisers have not signaled a dramatic shift in Washington’s approach towards Maduro, which has been based on a broad and program of sanctions that limit Venezuela’s oil exports and makes it difficult for US citizens to do business with the government in Caracas.”

Reuters adds that “Biden is expected to seek greater coordination with his partners, as he could face pressure to ease some measures, including restrictions on Venezuela’s gasoline imports, for humanitarian reasons, amid the coronavirus pandemic.”

Gasoline shortages acutely affect millions of Venezuelans everyday, and also the economy of the country due to the sanctions on PDVSA (the national petroleum company), forbidding it to export oil and to buy parts to carry out proper maintenance of Venezuelan refineries. In addition, the US authorities have illegally seized gasoline, brought by Venezuela to try to alleviate the difficult situation in the midst of their battle against COVID-19.