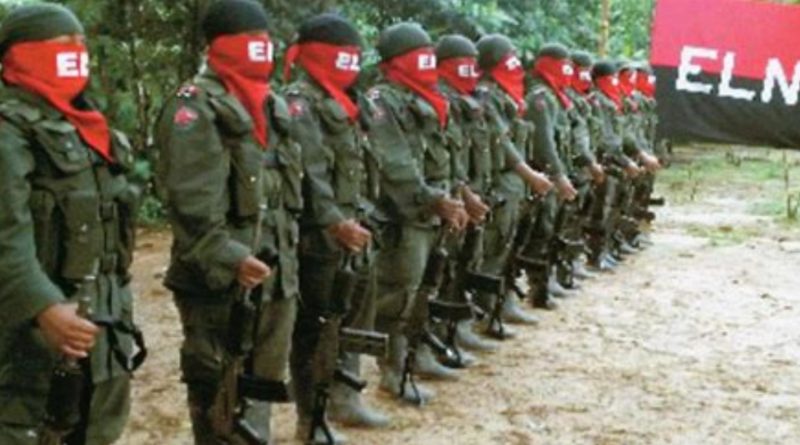 On Friday, February 14, the ELN declared a 72-hour armed strike demanding the cessation of transport activities and the closure of businesses in the country.

This armed strike caused a collapse of government authority in the territories controlled by the guerrillas. The military has been powerless to stop the movement, despite optimistic statements of a dozen high-ranking officers at a press conference.

In some cases, soldiers and police have been forced to seek refuge in their police stations or barracks. The ELN has also carried out a series of attacks on critical infrastructure.

The guerrillas managed to close the two highways connecting the capital Bogota as well as the country’s second city, Medellin, to the Caribbean coast, injuring five police officers.

Traffic between Cali and the Ecuadorian border has been significantly reduced as bus drivers and truckers have refused to take the Pan American route that crosses territory controlled by ELN in the southwestern province of Cauca.

Public oil company Ecopetrol was forced to close the Caño-Limon Coveñas pipeline after several bomb attacks. A soldier was killed in a sniper attack in the northeast region of Catatumbo on Saturday.

In the department of Arauca, the armed strike transformed both the provincial capital (Arauca) and other towns in the department into ghost towns where the police and the army obeyed guerrilla orders and did not not leave their bases.

In the department of Cesar, six police officers were injured by an ELN bomb attack on the road between the towns of Pelaya and El Burro. The ELN also blew up the road connecting the municipality of Catatumbo to Venezuela.

In a separate incident ELN rebels injured at least five policemen in a shootout in the Cesar province on Friday.

Locals from Curumani, also in Cesar, reported two explosions behind the local police station in an ELN attack.

Attacks on police stations were also reported in Fortul and Arauquita, two towns in Arauca where the guerrilla have a remarkably strong presence.

Public life in guerrilla-controlled regions throughout Colombia has come to a halt. Entire cities have turned into ghost towns as the revolutionary movement challenges capitalist/fascist authority.

Multiple residents and local media from guerrilla controlled territories have said that the police are obeying guerrilla orders not to go out in the street.

The ELN did not just successfully cause the partial collapse of the state in areas historically under their control, the guerrillas were even able to carry out successful attacks on crucial infrastructure.

The guerrillas successfully shut down the two highways connecting the capital Bogota and the country’s second largest city Medellin to the Caribbean coast, injuring five policeman and one civilian.

A bomb attack in the border city of Cucuta hours before the end of the shutdown left at least one soldier injured.

Traffic between Cali and the Ecuadorean border was dramatically reduced as bus drivers and truckers refused to take the Pan-American highway that crosses ELN-controlled territory in the southwestern Cauca province.

One soldier was killed in the northeastern Catatumbo region and the director of the regional television station of the southwestern Cauca province was forced to flee.

While the guerrillas were trying to carry out as many attacks as possible to show Colombia the ELN’s military prowess, state forces were trying to downplay exactly that.

A guerrilla recruiter said their “armed struggle” is against “bad governance” linking the clear connection between the protest movements that began in November with the armed movement.

One of the reasons for the ELN’s ongoing offensive is the “reactionary violence of oligarchical governments as a weapon of domination,” the guerrilla said over images of the violent repression of the protests.

In another reference to the recent urban protests, the ELN member said the armed strike was “because education is in the hands of businessmen who are taking advantage of the people” while “college graduates and intellectuals must sell themselves to the ruling class or perish.”

Additionally, “the land is being worked by farmers who don’t even have a place to drop dead” while “the ignorance of the leaders destroys our Mother Earth and its communities,” according to the guerrilla.

Workers “are working for a hunger wage,” the ELN member said, adding that “small businessmen are ruined by foreign capital” and “the wealth of our territory is being plundered by the gringos.”