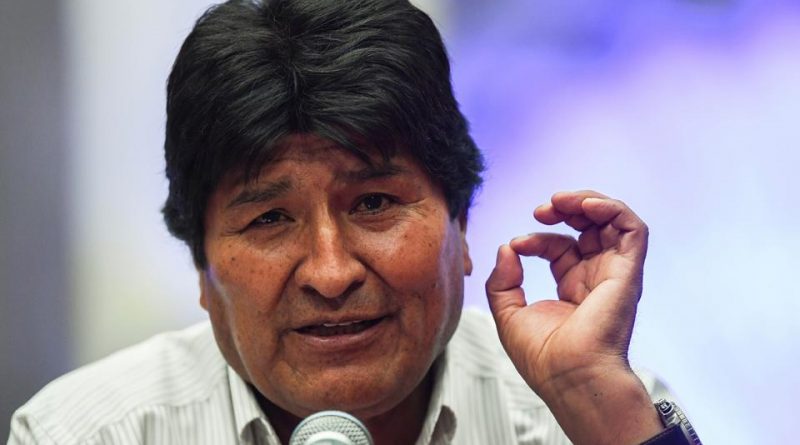 The president of Bolivia overthrown after a coup d’etat, Evo Morales, acknowledged from Mexico that he is “analyzing” the invitation that the elected president Alberto Fernández made to travel to Argentina and regretted that the government of Mauricio Macri has prioritized maintaining “ideological differences” instead of “defending democracy”.

“I don’t lose hope of returning to Bolivia. And if I approach Bolivia through Argentina, it will be even better. We are analyzing (Fernández’s proposal) but we will let a little more time go by,” said the president from Mexico, where he is under political asylum.

In the same way, he thanked the gestures of support “from the Argentine people” and questioned the position of the government of “Juntos por el Cambio” (Macri’s party) for not recognizing that there was a coup in Bolivia.

“I fully understand the ideological differences with President (Mauricio) Macri. But aside from these ideological and programmatic differences, the first thing must be to defend democracy,” he said during a radio interview El Destape.

In addition, Morales denied that in the elections that gave him a victory in the first round there had been “fraud”, although he acknowledged that there may have been “some errors.” “There were some mistakes but there was no fraud. How can I do fraud? I am not from the lie, I am not from the people who hurt,” he remarked.

He said, “The right invented the issue of fraud” to start attacks against him. In this sense, he blamed the United States and the Organization of American States (OAS) for being “responsible” for his fall after being reelected for a new term.

“I am very sorry that the OAS is with some people from the United States making coups. History will judge them,” he said and also regretted that “many media outlets” in his country have been “part of the coup d’etat”. “Its owners are part of the oligarchy and are at the service of this coup,” he said.

On the other hand, he highlighted the fact that at this time “the people are mobilizing to face the coup.” He said he has information that makes him “almost certain that our Armed Forces will join the struggle of the people defending democracy.” “The subordinates are rebelling against their commanders,” he revealed.

During the interview he regretted what is happening in his country and denounced that “oligarchic groups that hold economic power, unfortunately with police and the Armed Forces, did not forgive the social and indigenous movements because we continue with our democratic and cultural revolution”.

He once again held the opposition candidate Carlos Mesa and the far-right Fernando Camacho responsible for “organizing vandalism groups” that after the elections “burned departmental courts to burn the voting records,” he said.

He also reiterated that his resignation was “so that my brothers’ houses were not burned, my sisters are not attacked and that the violence exerted by the right stops” and remarked that the parties and organizations that always supported him “took care of peoples lives” until the last moment.

However, their opponents “do not accept that the social and indigenous movements are president (SIC). They do not accept our social programs that, under a policy of redistribution of wealth, lower extreme poverty. They did not forgive us the nationalization of hydrocarbons and natural resources.”

Then he asked “why are they so afraid of Evo and the social movements?” And he grieved that “now everyone sees hatred and racism against the indigenous movement” in Bolivia.

Finally, he expressed “hope” that “with the United Nations Organization (UN) we will begin a peace dialogue” in his country and said he is willing to “return if the people ask me to.”

However, he clarified that this will happen if first “there are guarantees” that his life will not be at risk. “We are peace fighters, for social justice, we work to avoid confrontation,” he concluded.