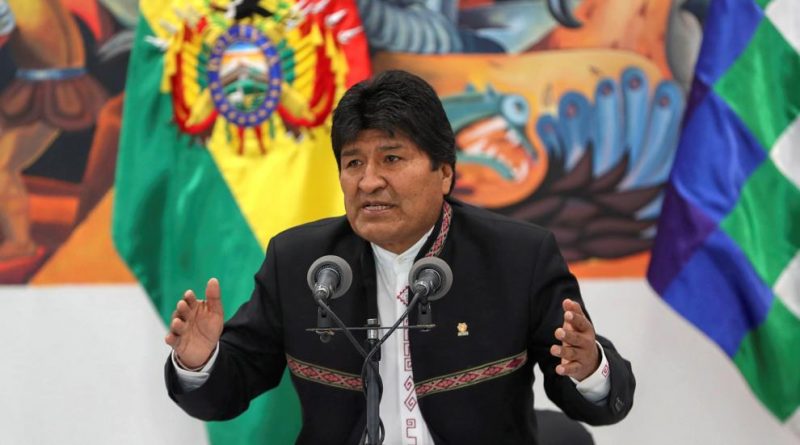 Morales explained that the coup d’etat is expressed in the opposition’s refusal to allow the counting of votes, in the attacks that groups have carried out against state institutions, such as the departmental electoral tribunals.

New triumph
The Bolivian president expresses thanks “for this new victory” and said that “he won democratically” his fourth consecutive election with a difference of “more than half a million votes” against his main contender, Carlos Mesa.

Morales ratified that his party, the Movement to Socialism (MAS) received the absolute majority of deputies and senators.

We will not go into confrontation
The Bolivian president said that although they have avoided falling into the provocations of the opposition groups that do not recognize the results and that have threatened to paralyze the country and obstruct their pathways, their followers must remain alert in a “state of emergency and peaceful and constitutional mobilization to defend democracy”.

“So far we endure patiently to avoid violence, we have not entered into confrontation and we are not going to do so but we are going to defend democracy,” he said.

Last Tuesday, the TSE issued a statement in which it expressed its rejection of the “acts of violence” against the buildings of the Departmental Electoral Courts (TED) and asked the “political organizations and civil society to follow this phase in a peaceful way.”

Last Monday, supporters of the Bolivian opposition were stationed around the headquarters of the Supreme Electoral Tribunal, in La Paz, where the vote counting was carried out and attempted to enter the operations center by force.

Vote counting
On the previous day, the Executive invited the observers of the European Union and the Organization of American States to verify “one by one the votes of the whole country”, after the main contender the president, Carlos Mesa, denounced fraud in the vote counting

The results of the official quick count of last Sunday’s elections in Bolivia indicate that Evo Morales would win the first-round election. With 95.63% of the verified ballots, the current president reaches 46.85% of the votes, while his main opponent, Carlos Mesa, obtains 36.74% of the votes.

For its part, the latest official results update , with 97.46% of the ballots scrutinized, offers on Wednesday a result similar to that shown in the quick count, but there might be a second round unless the tendency changes: 37.17% of the votes for Mesa and 46. 24% for Morales.