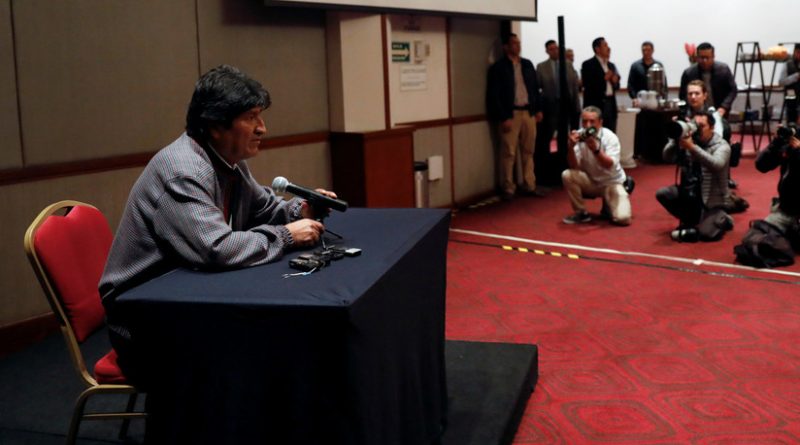 The president deposed after a coup d’etat in Bolivia, Evo Morales, said that “the nationalization of resources is the cause of this conflict,” which resulted in a right-wing dictatorship that to date has left at least 30 dead . “Some do not accept that the Indians govern,” Morales added.

He noted that the de facto government in his country published “a Carte Blanche” to slaughter people. ‘They issued a decree as if they have a carte blanche to kill Bolivians . That is only done in military dictatorship,” he said at a press conference on Wednesday, November 20, from Mexico City.

Morales said the repression of the coup regime has caused several deaths and dozens injured at the hands of the armed forces.

‘We have about 30 dead in a week. This massacre is part of a genocide occurring in our beloved Bolivia,” he said.

Morales’s statements came after protesters reported the killing of at least six civilians by the armed forces at a hydrocarbon plant located in Senkata, a town near El Alto.

The deposed president also called on the United Nations to denounce and curb “this massacre of indigenous brothers calling for peace, democracy and respect for life on the streets.”

However, he did not rule out a negotiated exit to the conflict, even by holding new elections, after the Bolivian Congress speaking  from the coup, reviewed a legal initiative to call new elections.

In a conference from Mexico City, where he temporarily lives under political asylum, Morales explained the progress of his administration in the production of lithium and the gas reserves of the Andean nation.

Bolivia has the largest lithium reserves on the planet, with about 21 million tons in the Uyuni salt flat, as confirmed by the US company SRK’s study, a mineral necessary for the manufacture of batteries in electronic devices. This means about 50% of global lithium reserves.

In addition, Bolivia has 10.75 trillion cubic feet tested in natural gas reserves, one of the largest in the world.

Truth Commission
The exiled coca grower leader in Mexico also summoned international organizations and Pope Francis to build a truth commission to clarify what happened in the October 20 presidential elections .

Morales criticized the external pressures involved in the Bolivian crisis and accused the Organization of American States (OAS) as a coup sponsor.

This, after the multilateral body published a preliminary report in which, despite not providing any evidence on the alleged electoral fraud in favor of Evo Morales, generated a wave of disqualifications against his mandate, including statements by Luis Almagro, secretary general of the OAS.

Therefore, Morales called “for some organizations to join and demonstrate how the OAS sponsored this coup d’etat.”

He also reiterated his triumph in the first round of the presidential elections in Bolivia, after independent analyzes such as the one carried out by the Center for Research in Politics and Economics (CEPR, based in Washington) and a study by the University of Michigan did not find any elements that indicate an alleged electoral fraud.

“We won in the first round. There are international reports that prove it,” Morales defended.

In this regard, Morales said he hoped that “the international community can contribute” to solve the political conflict in his country “and not be like the OAS, aligned with the coup”.

At the same time, Morales reported that the US has operated politically to prevent him from returning to Bolivia.

The socialist leader said that some voices have asked him to enter into a dialogue with the Bolivian coup regime outside the country, which he rejected, considering that he sees no reason for such talks to take place outside Bolivia.

The president criticized the silence of the mainstream media both in Bolivia and internationally, who have been silent on the massacre of the Bolivian people.

“Many media outlets are as anesthetized, they don’t report,” he said.