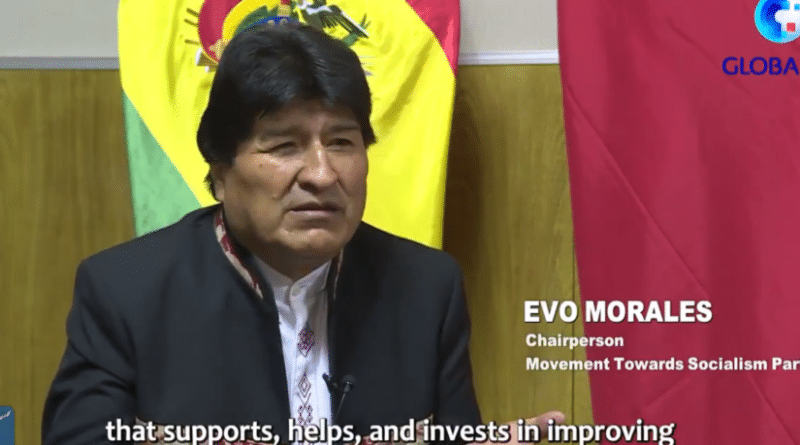 Embedded below is a lovely short video featuring former Bolivian president Evo Morales, leader of the Movement Towards Socialism (MAS), discussing his thoughts on China, the Belt and Road Initiative, China-Bolivia relations, and his impressions of Xi Jinping. The video, produced by Xinhua, first appeared on Twitter.

RELATED CONTENT: China’s Belt and Road is the way for Europe and Asia to Cut Colonial Western Ties and Prosper

The best policy is one that supports social equality, that supports, helps, and invests in improving the social and economic situation of the poorest people. China’s policies aim to help countries, peoples, and social sectors that are often forgotten.

China develops, and helps, invests, without any conditions, just to support our development. China is always ready to cooperate unconditionally.

What I understood is that he (President Xi Jinping) treats us brother to brother, as equals. I never felt that they looked at us from above. That is the difference, even with other countries. Again I want to tell you, a population like China, with more than 1,400 million inhabitants dealing with a nation of little more than 10 million inhabitants, treating them as equals, draws my attention. I feel that it is a cultural fact in humanity.

I respect, admire, and love the Chinese president, the CPC, and the Chinese people, as they put humanity in their thoughts.